Gadodiamide is a gadolinium-based MRI contrast agent, used in MR imaging procedures to assist in the visualization of blood vessels. It is commonly marketed under the trade name Omniscan.

Gadodiamide is a contrast medium for cranial and spinal magnetic resonance imaging (MRI) and for general MRI of the body after intravenous administration. The product provides contrast enhancement and facilitates visualisation of abnormal structures or lesions in various parts of the body including the central nervous system (CNS). It does not cross an intact blood brain barrier but might give enhancement in pathological conditions. 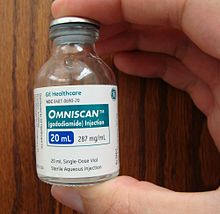 A bottle of Omniscan contrast agent.

In February 2008, Danish media stated that gadolinium-based agents may be associated with a toxic reaction known as nephrogenic systemic fibrosis (NSF) in some patients with severe kidney problems.

Some articles suggested that over 60 persons examined with Omniscan had either died or had been severely disabled as a result of the use of the product. However, a recent report by the Danish Medicines Agency stated that there were 35 cases of NSF reported after use of Omniscan and that 33 of these had been reported from a single centre in Copenhagen. However, already in 2001, a case of renal toxicity and pancreatitis associated with Omniscan use for arteriography had been reported. In their paper, the authors also referred to two other previous case reports (1998 and 1999) of acute renal failure after gadoteridol (Prohance) intraarterially and acute pancreatitis after intravenous gadolinium-DTPA[expand acronym] [1] A case of cardiac arrest has also been reported. Gadopentetate dimeglumine (Magnevist) was administered during an MR study of the head, and from the rapid onset of signs and symptoms and subsequent cardiovascular arrest, a cause-and-effect relationship was suggested.[2] In the interest of public health, it seems important that not only renal disease should be considered a factor when decisions about the use of this kind of MRI contrast is taken.

Release of Gd3+ from the complex is said to be responsible for the toxicity associated with gadolinium complexes; this release appears to be a consequence of Zn2+, Cu2+, and Ca2+ transmetallation in vivo. This hypothesis is supported by 1) acute toxicity experiments, which demonstrate that despite a 50-fold range of LD50 values for four Gd complexes, all become lethally toxic when they release precisely the same quantity of Gd3+, and 2) by subchronic rodent toxicity experiments, which demonstrate a set of gross and microscopic findings similar to those known to be caused by Zn2+ deficiency.[3] A recent review takes the question of toxicity caused by loss of gadolinium from the complex. "The challenge for nephrologists includes (a) evidence of transmetallation, such as gadolinium deposits in bone, increased urinary zinc excretion, iron-transferrin dissociation or 'spurious hypocalcemia' in exposed people" [4]

Nephrogenic systemic fibrosis (NSF) is a rare, but potentially serious, acquired systemic disease. To date, it has only been reported in patients with either severe, end-stage or acute renal impairment. There have been no reports of NSF associated with gadolinium-based contrast agents (GBCA) in those patients with mild or moderate renal impairment or with normal kidney function. This latter group of patients make up the significant majority of the population who undergo imaging procedures. To date, over 120 million doses of GBCA have been given over a 20-year period. Of those, more than 40 million doses were Omniscan.

One of the many, as yet unanswered, questions regarding NSF is why certain centers have relatively high numbers of NSF reports whereas the majority of hospitals using gadolinium contrast agents have no reports.