The didgeridoo (also known as a didjeridu or didge) is a wind instrument developed by Indigenous Australians of northern Australia around 1,500 years ago and still in widespread usage today both in Australia and around the world. It is sometimes described as a natural wooden trumpet or "drone pipe". Musicologists classify it as a brass aerophone.[1]

There are no reliable sources stating the didgeridoo's exact age. Archaeological studies of rock art in Northern Australia suggest that the people of the Kakadu region of the Northern Territory have been using the didgeridoo for less than 1,000 years, based on the dating of paintings on cave walls and shelters from this period.[2] A clear rock painting in Ginga Wardelirrhmeng, on the northern edge of the Arnhem Land plateau, from the freshwater period[3] shows a didgeridoo player and two songmen participating in an Ubarr Ceremony.[4]

A modern didgeridoo is usually cylindrical or conical, and can measure anywhere from 1 to 3 m (3 to 10 ft) long. Most are around 1.2 m (4 ft) long. The length is directly related to the 1/2 sound wavelength of the keynote. Generally, the longer the instrument, the lower the pitch or key of the instrument.

"Didgeridoo" is considered to be an onomatopoetic word of Western invention. It has also been suggested that it may be derived from the Irish words dúdaire or dúidire, meaning variously 'trumpeter; constant smoker, puffer; long-necked person, eavesdropper; hummer, crooner' and dubh, meaning "black" (or dúth, meaning "native").[5] However, this theory is not widely accepted.

The earliest occurrences of the word in print include a 1919 issue of Smith's Weekly where it was referred to as an "infernal didjerry" which "produced but one sound - (phonic) didjerry, didjerry, didjerry and so on ad infinitum", the 1919 Australian National Dictionary, The Bulletin in 1924 and the writings of Herbert Basedow in 1926. There are numerous names for this instrument among the Aboriginal people of northern Australia, with yiḏaki one of the better known words in modern Western society. Yiḏaki, also sometimes spelt yirdaki, refers to the specific type of instrument made and used by the Yolngu people of north-east Arnhem Land. However, Yolngu themselves are currently using the synonym mandapul to refer to the instrument, out of respect for the passing of a Manggalili-clan man in early 2011 whose name sounds similar to yiḏaki. Many didgeridoo enthusiasts and some scholars advocate reserving tribal names for tribal instruments, and this practice has been endorsed by some Aboriginal community organisations,[6] though in day-to-day conversation bilingual Aboriginal people will often use the word "didgeridoo" interchangeably with the instrument's name in their own language.

There are at least 45 regional names for the didgeridoo. The following are some of the more common of these.[7] 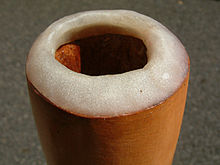 A wax mouthpiece can soften during play, forming a better seal.

Authentic Aboriginal didgeridoos are produced in traditionally oriented communities in Northern Australia or by makers who travel to Central and Northern Australia to collect the raw materials. They are usually made from hardwoods, especially the various eucalyptus species that are endemic to the region.[8] Sometimes a native bamboo, such as Bambusa arnhemica, or pandanus is used. Generally the main trunk of the tree is harvested, though a substantial branch may be used instead. Aboriginal didgeridoo craftsmen hunt for suitably hollow live trees in areas with obvious termite activity. Termites attack these living eucalyptus trees, removing only the dead heartwood of the tree, as the living sapwood contains a chemical that repels the insects. [9] Various techniques are employed to find trees with a suitable hollow, including knowledge of landscape and termite activity patterns, and a kind of tap or knock test, in which the bark of the tree is peeled back, and a fingernail or the blunt end of a tool, such as an axe is knocked against the wood to determine if the hollow produces the right resonance.[10]

Once a suitably hollow tree is found, it is cut down and cleaned out, the bark is taken off, the ends trimmed, and the exterior is shaped; this results in a finished instrument. This instrument may be painted or left undecorated. A rim of beeswax may be applied to the mouthpiece end. Traditional instruments made by Aboriginal craftsmen in Arnhem Land are sometimes fitted with a 'sugarbag' mouthpiece. This black beeswax comes from wild bees and has a distinctive aroma.

Non-traditional didgeridoos can also be made from PVC piping, non-native hard woods (typically split, hollowed and rejoined), glass, fiberglass, metal, agave, clay, hemp (a bioplastic named zelfo), and even carbon fiber. These didges typically have an upper inside diameter of around 1.25" down to a bell end of anywhere between two to eight inches and have a length corresponding to the desired key. The mouthpiece can be constructed of beeswax, hardwood or simply sanded and sized by the craftsman. In PVC, an appropriately sized rubber stopper with a hole cut into it is equally acceptable, or to finely sand and buff the end of the pipe to create a comfortable mouthpiece.

The didgeridoo is played with continuously vibrating lips to produce the drone while using a special breathing technique called circular breathing. This requires breathing in through the nose whilst simultaneously expelling stored air out of the mouth using the tongue and cheeks. By use of this technique, a skilled player can replenish the air in their lungs, and with practice can sustain a note for as long as desired. Recordings exist of modern didgeridoo players playing continuously for more than 40 minutes; Mark Atkins on Didgeridoo Concerto (1994) plays for over 50 minutes continuously.

Fellow of the British Society Anthony Baines wrote that the didgeridoo functions "...as an aural kaleidoscope of timbres"[13] and that "the extremely difficult virtuoso techniques developed by expert performers find no parallel elsewhere."[13]

Many didgeridoos are painted using traditional or modern paints by either their maker or a dedicated artist, however it is not essential that the instrument be decorated. It is also common to retain the natural wood grain with minimal or no decoration. Some modern makers deliberately avoid decoration if they are not of Indigenous Australian descent, or leave the instrument blank for an Indigenous Australian artist to decorate it at a later stage.

An Aboriginal man playing the Didgeridoo at Circular Quay

A termite-bored didgeridoo has an irregular shape that, overall, usually increases in diameter towards the lower end. This shape means that its resonances occur at frequencies that are not harmonically spaced in frequency. This contrasts with the harmonic spacing of the resonances in a cylindrical plastic pipe, whose resonant frequencies fall in the ratio 1:3:5 etc. The second resonance of a didgeridoo (the note sounded by overblowing) is usually around an 11th higher than the fundamental frequency (a frequency ratio somewhat less than 3:1).

The vibration produced by the player's lips has harmonics, i.e., it has frequency components falling exactly in the ratio 1:2:3 etc. However, the non-harmonic spacing of the instrument's resonances means that the harmonics of the fundamental note are not systematically assisted by instrument resonances, as is usually the case for Western wind instruments (e.g., in a clarinet, the 1st 3rd and 5th harmonics of the reed are assisted by resonances of the bore, at least for notes in the low range).

Sufficiently strong resonances of the vocal tract can strongly influence the timbre of the instrument. At some frequencies, whose values depend on the position of the player's tongue, resonances of the vocal tract inhibit the oscillatory flow of air into the instrument. Bands of frequencies that are not thus inhibited produce formants in the output sound. These formants, and especially their variation during the inhalation and exhalation phases of circular breathing, give the instrument its readily recognizable sound.

Other variations in the didgeridoo's sound can be made by adding vocalizations to the drone. Most of the vocalizations are related to sounds emitted by Australian animals, such as the dingo or the kookaburra. To produce these sounds, the players simply have to use their vocal cords to produce the sounds of the animals whilst continuing to blow air through the instrument. The results range from very high-pitched sounds to much lower guttural vibrations. Adding vocalizations increases the complexity of the playing.

Traditionally and originally, the didgeridoo was primarily played as an accompaniment to ceremonial dancing and singing. However, it was also common for didgeridoos to be played for solo or recreational purposes outside of ceremonial gatherings. For surviving Aboriginal groups of northern Australia, the didgeridoo is still an integral part of ceremonial life, as it accompanies singers and dancers in cultural ceremonies that continue. Today, the majority of didgeridoo playing is for recreational purposes in both Indigenous Australian communities and elsewhere around the world.

Pair sticks, sometimes called clapsticks or bilma, establish the beat for the songs during ceremonies. The rhythm of the didgeridoo and the beat of the clapsticks are precise, and these patterns have been handed down for many generations. In the Wangga genre, the song-man starts with vocals and then introduces blima to the accompaniment of didgeridoo.[14]

Traditionally, only men play the didgeridoo and sing during ceremonial occasions, although both men and women may dance. Female didgeridoo players do exist, but their playing takes place in an informal context and is not specifically encouraged. Linda Barwick, an ethnomusicologist, says that though traditionally women have not played the didgeridoo in ceremony, in informal situations there is no prohibition in the Dreaming Law.[15] For example, Jemima Wimalu, a Mara woman from the Roper River is very proficient at playing the didgeridoo and is featured on the record Aboriginal Sound Instruments released in 1978. In 1995, musicologist Steve Knopoff observed Yirrkala women performing djatpangarri songs that are traditionally performed by men and in 1996, ethnomusicologist Elizabeth MacKinley reported women of the Yanyuwa group giving public performances. On 3 September 2008, however, publisher Harper Collins issued a public apology for its book "The Daring Book for Girls" which openly encouraged girls to play the instrument.[16][17][2]

While there is no prohibition in the area of the didgeridoo's origin, such restrictions have been applied by other Indigenous communities. The didgeridoo was introduced to the Kimberlies almost a century ago but it is only in the last decade that Aboriginal men have shown adverse reactions to women playing the instrument and prohibitions are especially evident in the South East of Australia. The belief that women are prohibited from playing is widespread among non-Aboriginal people and is also common among Aboriginal communities in Southern Australia; some ethnomusicologists believe that the dissemination of the Taboo belief and other misconceptions is a result of commercial agendas and marketing. Tourists generally rely on shop employees for information when purchasing a didgeridoo. Additionally, the majority of commercial didgeridoo recordings available are distributed by multinational recording companies and feature non-Aboriginals playing a New Age style of music with liner notes promoting the instruments spirituality which misleads consumers about the didgeridoo's secular role in traditional Aboriginal culture.[2]

The Taboo belief is particularly strong among many Indigenous groups in the South East of Australia where non-Indigenous women, and especially performers of New Age music regardless of gender, playing or even touching a didgeridoo is forbidden and considered "cultural theft".[2]

The didgeridoo also became a role playing instrument in the experimental and avant-garde music scene. Industrial music bands like Test Department generated sounds from this instrument and used them in their industrial performances, linking ecology to industry, influenced by ethnic music and culture.

It has also been an instrument used for the fusion of tribal rhythms with a black metal sound, a music project called Naakhum that used the paganism of the Australian tribes and many others as an approach.

A 2005 study in the British Medical Journal found that learning and practicing the didgeridoo helped reduce snoring and obstructive sleep apnea by strengthening muscles in the upper airway, thus reducing their tendency to collapse during sleep.[18] This strengthening occurs after the player has mastered the circular breathing technique.