Kookaburra
For the Shovel-billed Kookaburra, see Clytoceyx.
For other uses, see Kookaburra (disambiguation).

Kookaburras (genus Dacelo) are terrestrial kingfishers native to Australia and New Guinea. They are large to very large, with a total length of 28–42 cm (11–17 in). The name is a loanword from Wiradjuri guuguubarra, and is onomatopoeic of its call. The single member of the genus Clytoceyx, though commonly referred to as the Shovel-billed Kookaburra, is not treated in this article.

Kookaburras are best known for their unmistakable call, which sounds uncannily like loud, echoing human laughter — good-natured, but rather hysterical, merriment in the case of the renowned Laughing Kookaburra (Dacelo novaeguineae); and maniacal cackling in the case of the slightly smaller Blue-winged Kookaburra (D. leachii). They are generally not closely associated with water, and can be found in habitats ranging from humid forest to arid savanna, but also in suburban and residential areas near running water and where food can be searched for easily.

There are four known species of kookaburras found in Australia, New Guinea, and the Aru Islands.

Unusual for close relatives, the Laughing and Blue-winged species are direct competitors in the area where their ranges overlap. This suggests that the two species, though having common stock, evolved in isolation (possibly during a period when Australia and New Guinea were more distant — see Australia-New Guinea) and were only brought back into contact in relatively recent geological times. 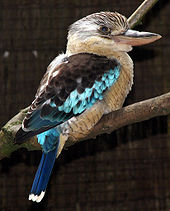 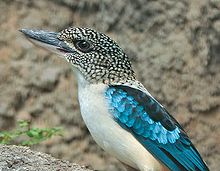 All kookaburras are sexually dimorphic, but this is only obvious in the Blue-winged and the Rufous-bellied, where males have blue tails, females rufous.

Kookaburras are carnivorous. They will eat lizards, snakes, insects, mice, other small birds, and raw meat. The most social birds will accept handouts from humans and will take raw or cooked meat (even if at high temperature) from on or near open-air barbecues left unattended. It is generally not advised to feed the birds too regularly as meat alone does not include calcium and other nutrients essential to the bird. Remainders of mince on the bird's beak can fester and cause problems for the bird.

They are territorial, and often live with the partly grown chicks of the previous season. They often sing as a chorus to mark their territory.

In the wild, kookaburras are known to eat the young of other birds and snakes, and insects and small reptiles and even other small birds, such as finches if they are lucky enough to catch them. In zoos, they are usually fed food for birds of prey, and dead baby chicks. 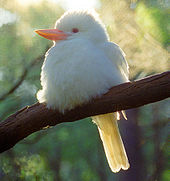 Olly the Kookaburra was one of the three mascots chosen for the 2000 Summer Olympics in Sydney. The other mascots were Millie the Echidna and Syd the Platypus.

Although the kookaburra is restricted to a relatively small part of the world, the distinctive sound it makes has found its way onto many "jungle sound" soundtracks, used in filmmaking and television productions as well as certain Disney theme park attractions, no matter where in the world the action is set. They have also appeared in video games (Lineage II, Battletoads, and World of Warcraft) and at least in one short story (Barry Wood's Nowhere to Go).

BFD Records and BFD Productions, which are the distributors and/or copyright holders of most of the garage rock and psychedelic rock compilations albums in the Pebbles (series), are shown as having an address of Kookaburra, Australia. 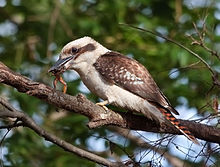 A Laughing Kookaburra with a frog in its beak in Sydney, Australia 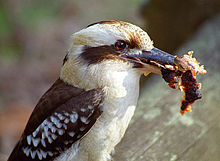 There has been an Australian coin known as the Silver Kookaburra minted annually since 1990.

The Australian Men's Hockey team is named after the Kookaburra. They are currently (as of 2010) world champions in the sport of field hockey.[3]