The Chūō Expressway (中央自動車道, Chūō Jidōsha-dō?) (lit. Central Expressway) is a national expressway in Japan. It is owned and operated by Central Nippon Expressway Company.

The Chūō Expressway is a major roadway connecting the greater Tokyo and Nagoya urban areas, a role also shared by the Tōmei Expressway. While the Tōmei Expressway follows a coastal route, the Chūō Expressway follows an inland route through the mountainous regions of Kanagawa, Yamanashi, Nagano, and Gifu Prefectures. In addition, a branch of the expressway in Yamanashi Prefecture known as the Kawaguchiko Route facilitates access to Mount Fuji and the Fuji Five Lakes area.

The expressway is 4 lanes for its entire length except for the section between Uenohara Interchange and Ōtuski Junction, which is 6 to 7 lanes. This section was originally 4 lanes as well, however increasing traffic volume led to the construction of a new parallel roadway for Uenohara-bound traffic, with the original 4 lanes of roadway being converted for the use of Ōtsuki-bound traffic only.

Tolls on the section from Takaido Interchange to Hachiōji Interchange are charged at a flat rate. As of April 2008 the toll on this section is 600 yen for a regular passenger car. Tolls on all other sections of the expressway are assessed according to distance travelled in the same manner as most other national expressways.[5] Also, tolls on the section from Sonohara Interchange to Nakatsugawa Interchange are assessed at 1.6 times the normal rate to account for the high cost of constructing the Enasan Tunnel. Vehicles carrying dangerous materials are forbidden from using this tunnel and must use alternate routes.

The Chūō Expressway affords many fine views of Mount Fuji. 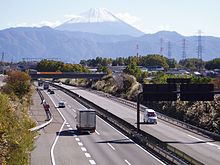 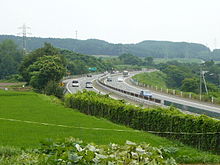