Nagórzany is about 10 miles from Sanok in south-west Poland. It is situated below the main watershed at the foot of the Słonne Mountain, and has an elevation of 340 metres. Situated in the Subcarpathian Voivodship (since 1999), previously in Krosno Voivodship (1975-1998) and Sanok district, (10 miles east of Sanok), located near the towns of Medzilaborce and Palota (in northeastern Slovakia). The village was a filial parish to Wola Sękowa 3km away.

Nagórzany with Lipniki, Ludwikówka and Węglarzyska, village, Sanok district, it lies south of Nowotaniec, along the road to Bukowsko (3.7 km), in a hilly area 390 m. above sea level, on the divide between the Pielnica (tributary of Wisłok) and Sanoczek (tributary of the San River). Forming sort of a suburb of Nowotaniec, it carries a name in contrast to that of Nadolany, lying to the north of the town. Its population in 1880 was 446 people, ecclesiastical sematisms indicate 927 RC belonging to the Nowotaniec parish and 55 GC in the Wola Sękowa parish. The adornment of the village is the masonry cerkiew p.t. Apostles Peter and Paul, to which belong 16 mórgs of fields and 16 morgs of grubbing for fuel. Nagorzany borders with Jaworowa Wola and Bukowsko to the south. Nagórzany was founded in 1446 by Bals family.

This part of Poland was controlled by Austria for almost 120 years. At that time the area (including west and east of Subcarpathian Voivodship) was known as Galicia. In 1785 the village lands comprised 6 ½ lan. There were 50 Greek Catholics, 267 Roman Catholics and 5 Jews. In 1899 the village lands comprised 3,43 km². There were 49 Greek Catholics, 431 Roman Catholics, and 10 Jews. The church at Nagórzany is right on the road an easy to get to. Church was "Saint Michael" 1848 - Apostles Saints Peter & Paul". The name was changed from Saint Michael in 1864. The cemetery has a few headstones in it. On April, 1946 the village was attacked by a strong unit of UPA and some buildings were burnt. Only over a dozen years after the war the village started to rebuild [1]. At one time the entire village was burned to the ground by the UPA with the exception of two houses belonging to Lemkos. No one was killed but every house was destroyed.

The rural families are poor, agriculture is rarely profitable and low income makes it difficult for farms to invest in from improvements. 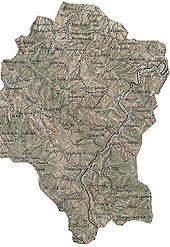