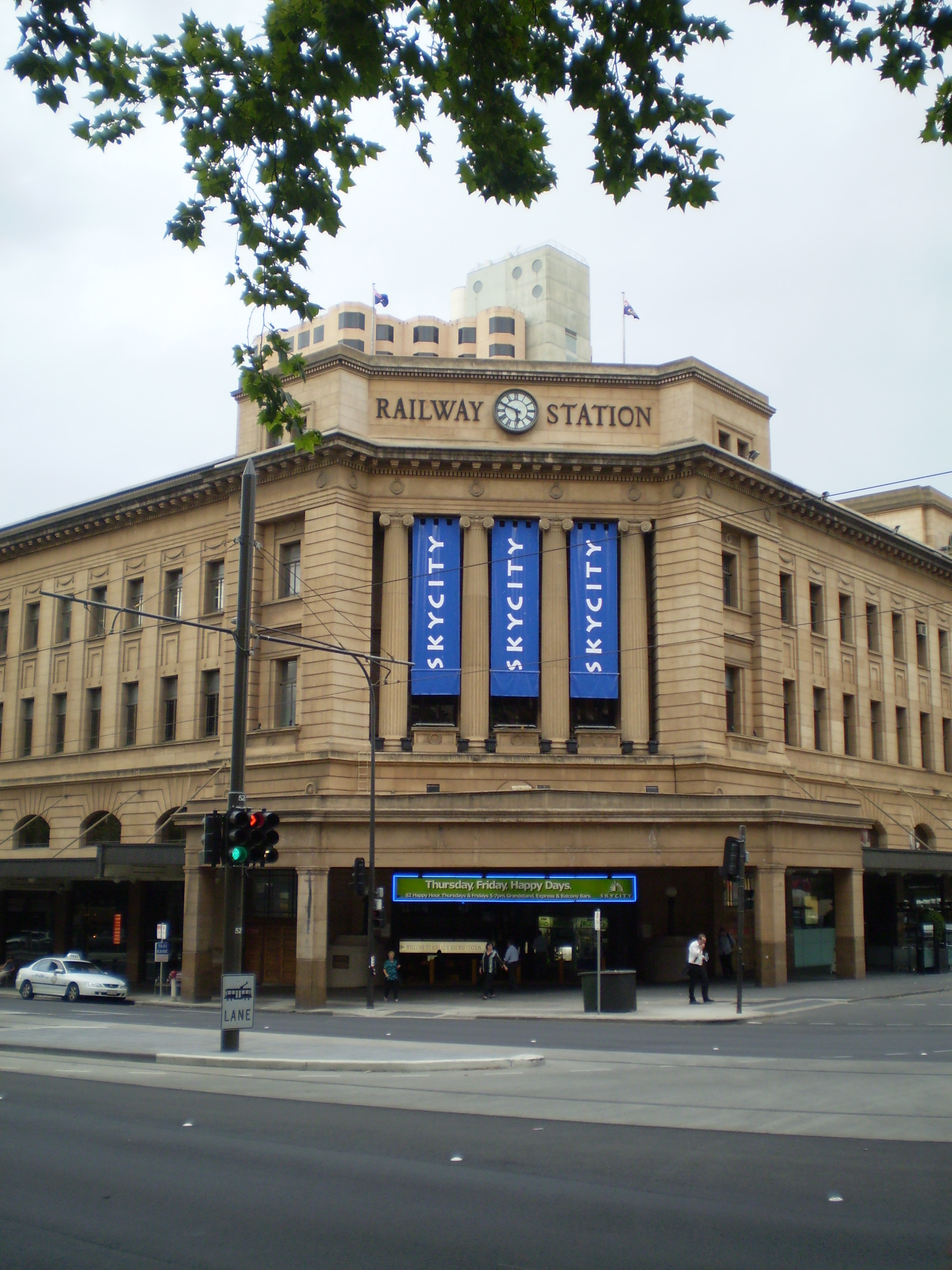 Adelaide Railway Station is the central terminus of the railway system. It is at coord|34|55|16|S|138|35|44|E|type:landmark_region:AU-SA on the north side of North Terrace, west of Parliament House. The is in part of the building that is no longer required for the station.

All lines approach the station from the west, and is a "dead end" station. Almost all trains on the metropolitan network either depart from or terminate here. It has nine platforms, all with track. Until 1984 Adelaide station was the terminus for country and interstate passenger trains, but there are no longer any regular country train services in South Australia and all interstate services are and call at .

Today 40,000 people pass through Adelaide Railway Station each weekday. Half of these travel during the morning and afternoon peak hours. Free tram and bus services depart from North Terrace outside the station providing easy access to other parts of the city centre.

Adelaide’s first railway station opened on the current North Terrace site in 1856. It served the line between and , which was the first government-owned and operated steam railway in the .

The first passenger train departed from Adelaide station on , carrying the Governor of South Australia and various dignitaries to a celebratory lunch at Port Adelaide. The Port line opened for public service the following Monday, . It was single track, with intermediate stations at Bowden, Woodville and Alberton and terminated at Port Dock station (now closed). There were six trains per day in each direction, and two on Sundays.

A second line opened to Smithfield, near Gawler, on , the predecessor of today’s Gawler line. This diverged from the Port line at a junction in the north parklands, and was extended to Kapunda in 1860, and Burra by 1870, both important copper mining towns in the early days of the colony.

The original Adelaide station handled all passenger, freight and livestock traffic at the North Terrace site. Livestock was unloaded adjacent to the markets and abattoirs, which were opposite the Newmarket Hotel, on the corner of West Terrace. In 1865 the station yard covered an area of 55,000 square metres (13 acres).

The next line into the station was built by the Holdfast Bay Railway Company and opened on . This branched off the "main line" where today’s Belair & Noarlunga lines separate from the Outer Harbor and Gawler lines. It ran via Mile End and Plympton to Glenelg, and should not be confused with the other railway from South Terrace to Glenelg, which later became the way.

To cope with increasing traffic, interlocked signals and points were installed in 1875, and the Port line was upgraded to double track in 1881.

The South Line through the was opened to Aldgate on , and extended to Nairne (November 1883) and Bordertown (May 1886). The first through train between Adelaide and Melbourne, the "Intercolonial Express", ran on , and was the first intercapital rail journey in Australia without a change of trains at a station.

With the basic framework of lines in place, the South Australian Railways continued building branch lines to promote settlement and agricultural development of the state’s hinterland. Most of this expansion was complete by the early years of the 20th century and the resulting increase in traffic caused troublesome congestion in the vicinity of Adelaide station. In an attempt to cope with this, the original 1856 station buildings were demolished and replaced in 1900.

The South line was doubled as far as Mitcham in 1908, and suburban trains ran to a new terminus at Clapham. The first section of the route that became the Noarlunga Centre line opened from Goodwood Junction to Marino in 1913. This was extended to Willunga by 1918.

On the north side of the city, a separate pair of tracks was built from the junction of the Port and North lines in the parklands through to Adelaide station yard, including a new bridge across the River Torrens.

In 1912, Mile End Goods Yard and engine sheds opened, and the Gaol Loop was built to allow freight trains to access the new yards at Mile End, bypassing Adelaide station. At the same time the livestock markets and abattoirs were relocated to Pooraka in the north of the metropolitan area, still countryside at the time. This allowed the area immediately around Adelaide station to concentrate on passenger and parcels traffic, and the old goods shed was then converted into a platform for Glenelg line trains

Adelaide station yard was re-signalled in July 1915, using American-style three-position semaphore signals. This was the first installation of an electric signalling system in South Australia and was subsequently extended along the main lines of the South Australian Railways.

The period from 1922 onwards was known as the Webb era on South Australian Railways. Under the leadership of a new Railways Commissioner, William A. Webb, South Australian Railways began a massive rehabilitation programme. Worn-out infrastructure, under-powered steam locomotives, undersized rolling stock and outdated operating systems were all modernised and upgraded along essentially American lines.

Among the many improvements that Webb championed, two of the best remembered are the introduction of new powerful steam locomotives and the rebuilding of Adelaide Railway Station.

The new station comprised a massive sandstone building in neo-classical style. The upper three storeys housed the railways administration, which had previously been scattered in various buildings around the city. The concourse had many facilities to cater for long distance travellers as well as daily commuters - a dining room, hairdressers, refreshment rooms etc. Of particular note was the enormous domed Marble Hall, which served as a grand and dignified main waiting room, and is now incorporated into the SKYCITY casino.

The new station had 13 platforms, each covered by an individual canopy to alleviate the problems of smoke and fumes previously endured with an overall roof. The initial plan had forward-thinking provisions for extra platforms (which were never built) to serve trains, on the assumption that CR’s line would be extended from Port Augusta and Port Pirie into Adelaide.

The cost of the rebuilding greatly exceeded the original budget and the project became a source of great controversy within S.A. as the state came close to bankruptcy with the onset of the .

In the decades after , South Australia became home to a great many migrants from the UK and Europe. At the time, most immigrants arrived by ship at Outer Harbor and were transferred to the city by special boat trains. Adelaide’s grand station would have created a memorable first impression on arrival in the city.

TA, AN and Keswick Terminal

In 1978 South Australia’s railway system was divided between two owners. The Commonwealth-government-controlled Australian National Railways (later Australian National, AN) took over ownership and operation of all country lines outside the Adelaide metropolitan area. The State-government-controlled (STA) retained the suburban routes around Adelaide, including ownership and operation of Adelaide Station.

AN’s remaining longer distance trains continued to arrive and depart from Adelaide station for several years, paying an access charge to the STA, until AN’s new Keswick Passenger Terminal opened on , a kilometre or two west of the Adelaide CBD in an industrial suburb. Adelaide Station is now served only by suburban trains.

Keswick Terminal was on the tracks heading north and south from Adelaide and also the line from Crystal Brook to Adelaide, which opened in 1983. This enabled interstate passengers to travel to Broken Hill, Sydney, Kalgoorlie, Perth and Alice Springs without a change of train. continued to operate from Keswick to on the broad gauge until 1995, when that was converted to standard gauge, so now all trains from Keswick are standard gauge. All trains from Adelaide Station are broad gauge.

The years 1985 to 1987 saw the biggest change at Adelaide Station since the rebuilding of the 1920s. The Adelaide Station and Environs Redevelopment (ASER) project involved:-
* refurbishment of much of the exterior of the heritage-listed station building and conversion of the interior to a casino (the main building had become underutilised as railway operations shrank and AN moved to a separate HQ building at Keswick).
* construction of the Hyatt Regency hotel over the northern part of the station site.
* construction of the Adelaide Convention Centre, Exhibition Hall and an office block over the central and southern parts of the station site.
* partial relocation and reduction of platforms from 13 to nine. The platforms became effectively underground and a special extraction system is needed to remove the exhaust fumes from the diesel railcars.

The track layout in the station yard was modified and resignalled in 1987/88, and operation of points and signals transferred to a new control centre overlooking the railcar depot and station. This resignalling resulted in closure of the two signal cabins that controlled movements in the station area – Adelaide Station Cabin (near Morphett St bridge) and Wye Cabin, at the divergence of the South and Port/North lines. Adelaide Station Cabin was demolished, but the Wye Cabin building is heritage-listed and still stands, although derelict.