The United States Department of Housing and Urban Development, also known as HUD, is a Cabinet department in the Executive branch of the United States federal government. Although its beginnings were in the House and Home Financing Agency, it was founded as a Cabinet department in 1965, as part of the "Great Society" program of President Lyndon Johnson, to develop and execute policies on housing and metropolises.

The department was established on September 9, 1965, when Lyndon B. Johnson sign the Department of Housing and Urban Development Act[1] into law. It stipulated that the department was to be created no later than November 8, sixty days following the date of enactment. The actual implementation was postponed until January 13, 1966, following the completion of a special study group report on the federal role in solving urban problems. 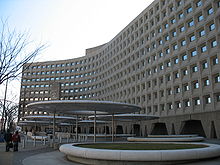 The Robert C. Weaver Federal Building is the headquarters of the Department of Housing and Urban Development located in Washington D.C. The building was designed by Marcel Breuer.

HUD has experimented with Enterprise Zones granting economic incentives to economically depressed urban areas, but this function has largely been taken over by states.

The major program offices are:

The 203(k) program offers low down payment loans to primary resident owner occupants or nonprofit groups to buy and renovate a house. A scandal with the program arose in the 1990s in which at least 700 houses were sold for profit by real estate speculators taking the loans; at least 19 were arrested,[10] and the situation devastated the housing market in Brooklyn and Harlem and resulted in $70 million in HUD loans going into default.[11] Critics said that HUD's lax oversight of their program allowed the fraud to occur.[12] In 1997, the HUD Inspector General had issued a report saying: "The program design encourages risky property deals, land sale and refinance schemes, overstated property appraisals, and phony or excessive fees."[13]

One of the most successful HUD programs over the years has been the Multifamily Housing Service Coordinator Program. Each year since 1992, HUD has included in its Notice of Fund Availability (NOFA), a specific allocation of dollars to allow sponsors and owners of HUD multifamily housing for the elderly the opportunity to hire a Service Coordinator. The Service Coordinator provides case management and coordinative services to elderly residents, particularly to those who are "frail" and "at-risk" allowing them to remain in their current residence. As a result, thousands of senior citizens throughout the United States have been given the opportunity to continue to live independently instead of in an institutional facility such as a nursing home. Professional organizations such as the American Association of Service Coordinators provide support to HUD Service Coordinator through education, training, networking and advocacy.

Due to HUD's lending practices, it occasionally takes possession of a home when a lender it insures forecloses. Such properties are then generally sold off to the highest bidder through the HUD auction process. Buyers of HUD homes as their primary residences who make a full-price offer to HUD using FHA-insured mortgage financing receive seller concessions from HUD enabling them to use only $100 down payment.

The Office of Inspector General

The Inspector General is responsible for conducting and supervising audits, investigations, and inspections relating to the programs and operations of the HUD. The OIG is to examine, evaluate and, where necessary, critique these operations and activities, recommending ways for the Department to carry out its responsibilities in the most effective, efficient, and economical manner possible.

The mission of the Office of Inspector General (OIG) is to:[14]

Department in meeting its mission.

The OIG accomplishes its mission by conducting investigations pertinent to its activities; by keeping Congress, the Secretary, and the public fully informed of its activities, and by working with staff (in this case of the HUD) in achieving success of its objectives and goals. Right now, the post of Inspector General of the HUD is vacant. Michael P. Stevens is the acting Inspector General.[15]

In 2006, The Village Voice called HUD "New York City's worst landlord" and "the #1 worst in the United States." The criticism is based upon decrepit conditions of buildings and questionable eviction practices.[13]