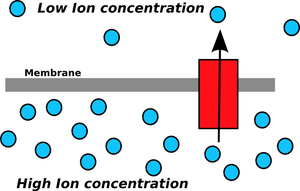 An Ion gradient has potential energy and can be used to power chemical reactions when the ions pass through a channel (red).

ATP synthase is the enzyme that makes ATP by chemiosmosis. It allows protons to pass through the membrane using the kinetic energy to phosphorylate ADP making ATP. The generation of ATP by chemiosmosis occurs in chloroplasts and mitochondria as well as in some bacteria.

Peter D. Mitchell proposed the chemiosmotic hypothesis in 1961.[1] The theory suggests essentially that most ATP synthesis in respiring cells come from the electrochemical gradient across the inner membranes of mitochondria by using the energy of NADH and FADH2 formed from the breaking down of energy rich molecules such as glucose. 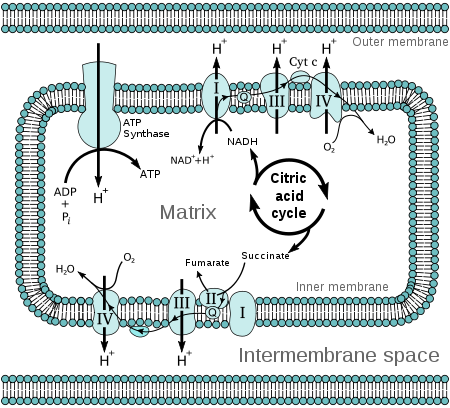 Chemiosmosis in a mitochondrion.

Molecules such as glucose are metabolized to produce acetyl CoA as an energy-rich intermediate. The oxidation of acetyl CoA in the mitochondrial matrix is coupled to the reduction of a carrier molecule such as NAD and FAD.[2] The carriers pass electrons to the electron transport chain (ETC) in the inner mitochondrial membrane, which in turn pass them to other proteins in the ETC. The energy available in the electrons is used to pump protons from the matrix across the inner mitochondrial membrane, storing energy in the form of a transmembrane electrochemical gradient. The protons move back across the inner membrane through the enzyme ATP synthase. The flow of protons back into the matrix of the mitochondrion via ATP synthase provides enough energy for ADP to combine with inorganic phosphate to form ATP. The electrons and protons at the last pump in the ETC are taken up by oxygen to form water.

This was a radical proposal at the time, and was not well accepted. The prevailing view was that the energy of electron transfer was stored as a stable high potential intermediate, a chemically more conservative concept.

The problem with the older paradigm is that no high energy intermediate was ever found, and the evidence for proton pumping by the complexes of the electron transfer chain grew too great to be ignored. Eventually the weight of evidence began to favor the chemiosmotic hypothesis, and in 1978, Peter Mitchell was awarded the Nobel Prize in Chemistry.[3]

Chemiosmotic coupling is important for ATP production in chloroplasts[4] and many bacteria.[5]

In all mitochondria, chloroplasts and in many bacteria, chemiosmosis involves the proton-motive force (PMF) in some step. This can be described as the storing of energy as a combination of proton and voltage gradients across a membrane. The chemical potential energy refers to the difference in concentration of the protons on each side of the membrane and the electrical potential energy as a consequence of the charge separation across the membrane (when the protons move without a counter-ion, such as an electron).

In most cases the proton motive force is generated by an electron transport chain which acts as a proton pump, using the energy in electrons from an electron carrier to pump protons (hydrogen ions) out across the membrane, creating a separation of charge across the membrane. In mitochondria, free energy released from electrons by the electron transport chain is used to move protons from the mitochondrial matrix to the intermembrane space of the mitochondrion. Moving the protons out of the mitochondrion creates a lower concentration of positively charged protons inside it, resulting in a slight negative on the inside of the membrane: The electrical potential gradient is about -200 mV, inside negative. This charge difference and the proton concentration difference create a combined electrochemical gradient across the membrane. This electrochemical gradient for protons is both a concentration and charge difference and is often called the proton motive force (PMF). In mitochondria, the PMF is almost entirely made up of the electrical component but in chloroplasts the PMF is made up mostly of the pH gradient. In either case, the PMF needs to be about 50 kJ/mol for the ADP synthase to be able to make ATP.

A diagram of chemiosmotic phosphorylation

Chemiosmotic phosphorylation is the third pathway that produces ATP from inorganic phosphate and an ADP molecule. This process is part of oxidative phosphorylation.

The complete breakdown of glucose in the presence of oxygen is called cellular respiration. The last steps of this process occur in mitochondria. The reduced molecules NADH and FADH2 are generated by the Krebs cycle, glycolysis, and pyruvate processing. These molecules pass electrons to an electron transport chain, which uses the energy released to create a proton gradient across the inner mitochondrial membrane. ATP synthase then uses the energy stored in this gradient to make ATP. This process is called oxidative phosphorylation because oxygen is the final electron acceptor and the energy released by reducing oxygen to water is used to phosphorylate ADP and generate ATP.

The light reactions of photosynthesis generate energy by chemiosmosis. Light energy (photons) are received by the antenna complex of Photosystem 2, which excites a pair of electrons to a higher energy level. These electrons travel down an electron transport chain, causing H+ to diffuse across the thylakoid membrane into the inter-thylakoid space. These H+ are then transported down their concentration gradient through an enzyme called ATP-synthase, creating ATP by phosphorylation of ADP to ATP. The electrons from the initial light reaction reach Photosystem 1, then are raised to a higher energy level by light energy and then received by an electron receptor and reduce NADP+ to NADPH+H. The electrons from Photosystem 2 get replaced by the splitting of water, called "photolysis." Two water molecules must be split in order to gain 2 electrons (as well as O2, the oxygen eudicots require for survival).

Bacteria and archaea also can use chemiosmosis to generate ATP. Cyanobacteria, green sulfur bacteria, and purple bacteria create energy by a process called photophosphorylation. These bacteria use the energy of light to create a proton gradient using a photosynthetic electron transport chain. Non-photosynthetic bacteria such as E. coli also contain ATP synthase.

In fact, mitochondria and chloroplasts are believed to have been formed when early eukaryotic cells ingested bacteria that could create energy using chemiosmosis. This is called the endosymbiotic theory.