The Bearcat became the UC mascot on October 31, 1914 in a football game against the UK Wildcats. The key players in the birth of the Bearcat were a star UC player named Baehr, a creative cheerleader, and a talented cartoonist. During the second half of that hard-fought football game, UC cheerleader Norman "Pat" Lyon, building on the efforts of fullback Leonard K. "Teddy" Baehr, created the chant: "They may be Wildcats, but we have a Baehr-cat on our side." 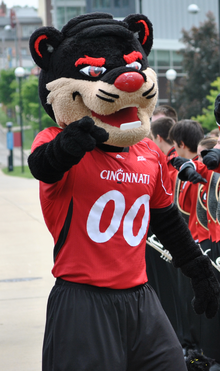 Current version of the The Bearcat.

The crowd took up the cry: "Come on, Baehr-cat!" Cincinnati prevailed, 14–7, and the victory was memorialized in a cartoon published on the front page of the student newspaper, the weekly University News, on November 3. The cartoon, by John "Paddy" Reece, depicted a bedraggled Kentucky Wildcat being chased by a creature labeled “Cincinnati Bear Cat".

The name stuck, but not immediately. Following Teddy Baehr's graduation in 1916, the name dropped out of use, at least in print, for a few years. On November 15, 1919, Cincinnati played at Tennessee. Cincinnati Enquirer writer Jack Ryder's dispatch on the game was the first time that the major media called UC's teams "Bearcats." From then on, the university's teams were regularly called Bearcats. 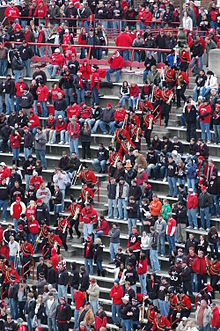 O Cincinnati, magic name, I proudly to the world proclaim;
No sweeter word ever charmed my ear,
None to my heart was ever so dear,
A fountain of eternal youth, a tower of strength, a rock of truth.

2nd verse
Of wealth and station some may boast, of wide renown from coast to coast;
None nobler teachings did instill,
Than old McMicken on the hill,
The black and red banner floats on high, let all join in the battle cry.

3rd verse
Long may she live, her children's pride, and grow and prosper far and wide.
At all time let our motto be: stand first and last for old UC,
We dedicate with might and main, to Alma Mater this refrain:

The Bearcats have four individual and six team championships. The Bearcats won the NCAA Men's Division I Basketball Championship in 1961 and 1962, both times against Ohio State. Charles Keating won the 1946 200m butterfly national title for UC as a member of the men's swimming team and most recently, Josh Schneider[1] did the same in the 50-yard (46 m) freestyle in 2010. In men's diving, Pat Evans (3 m Dive – 1989) and women's diving Becky Ruehl (10 m dive – 1996) have brought home titles for the Bearcats. The UC Dance Team has won 4 National Championships from 2004 through 2006 and again in 2009. They are the first team in UC history to ever capture three consecutive national titles. They remain one of the top dance programs in the country and are the winningest team in University of Cincinnati history. In 2009 the dance team was also selected to represent the United States of America in the first ever world dance championships where they won the gold medal in all three dance categories.[2]

In May 2006, Athletic Director (AD) Thomas introduced his vision for Bearcat Athletics, aptly titled CATAPULT. Thomas's five-year vision for UC's 18-sport intercollegiate program was launched six months after his hiring as AD. The plan focuses on three main initiatives: winning BIG EAST team championships, high-level academic achievement, and a comprehensive integration with the Greater Cincinnati Community. This action initiative tracks UC's 18 teams towards BIG EAST Championships in every sport within the next five years, encourages continued leadership by UC student-athletes in academics, and stresses community engagement. CATAPULT —an acronym for Championships, Academics, and Together— sets the goal that in the next five years UC will win a BIG EAST championship in every sport; UC's student-athletes will lead the general student body in graduation rate and grade point average; and UC's student-athletes and coaches will engage the Cincinnati community in service. During the 2006 Fall Quarter, the first under the CATAPULT plan, UC's sports teams made major improvements in academics, achieving an overall grade point average (GPA) of 2.938. Additionally, 11 of the 17 squads posted team GPAs higher than the general UC student body GPA of 2.965.

In 2006, four of the six UC fall sports teams improved their finish in the final BIG EAST conference standings over that of Fall 2005. The Bearcat teams collectively posted an improvement of three places. UC's men's soccer team became the first Bearcat squad to claim a BIG EAST title, winning the Red Division of the league's regular season race. Most recently, football won the Big East Championship in 2008 and 2009 and Women's Volleyball won the Big East regular season title in 2010. In December 2007 ESPN stated that if Academics AND Athletics Achievement were factored in, that the University of Cincinnati football team would be playing in the BCS Championship game. UC finished the season with a 10–3 record and a #17 national ranking.[citation needed]

All of the athletic facilities (with the exception of Fifth Third Arena and Marge Schott Stadium) are open 24/7 for student use.[3] 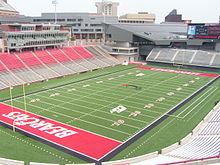 Cincinnati's oldest football rivalry, begun in 1888, is with Miami University, located in Oxford, Ohio about 40 miles to the northwest. 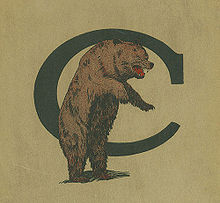 An early version of the UC Bearcats logo, from 1922

The Victory Bell awarded to the winner of each contest. It is the oldest college football rivalry west of the Allegheny Mountains and the third-oldest rivalry in college football. The first contest was also the first collegiate football game played in the state of Ohio. It is also the longest out-of-conference rivalry.

Cincinnati and the University of Louisville battle for the Keg of Nails annually. This rivalry dates back to 1929. As of 2009, there are no nails in the Keg of Nails, nor does anyone know if there ever were any in the first place.

In basketball, the Bearcats' chief rival is the Xavier University Musketeers. Xavier is a Jesuit university located less than 3 miles from the University of Cincinnati's main campus. The Bearcats and the Muskies meet annually in the popular Skyline Chili Crosstown Shootout.

The Bearcats also have basketball rivalries with the Charlotte 49ers, Louisville Cardinals and Memphis Tigers.

In addition to the rivalries already mentioned, Cincinnati also has an intermittent rivalry with Ohio State University and the University of Kentucky. Although Cincinnati does not play either school regularly, these are geographic rivals. Other than Louisville, they are the closest universities of similar size and stature. Cincinnati also beat Ohio State in both of its back-to-back national title games in basketball.

Cincinnati's men's basketball squads have been a perennial bracket team in the NCAA tournament. A prolific era in Bearcats basketball was during the late 1950s and early 1960s, when the Bearcats posted five consecutive Final Four appearances. Unanimous three-time All American guard Oscar Robertson led the nation in scoring during the 1957–58, 1958–59, and 1959–60 seasons and posted a career average of 33.8 points per game, which ranks as the third all-time best in Division I.

Cincinnati has won two national championships (both against Ohio State) in 1961 and 1962. The 1961 and 1962 titles were won under rookie coach Ed Jucker.

Cincinnati fell out of prominence during the early 1970s. After a brief resurgence in the mid-1970s, the program fell on hard times in the 1980s, but was revitalized under head coach Bob Huggins following his hiring in 1989. Under Huggins, the Bearcats compiled a 399–127 record in sixteen seasons, and posted fourteen straight NCAA tournament appearances. The most notable of the teams from the Huggins era was the 1991–1992 team, which lost to the Michigan Wolverines in the Final Four. In addition, Huggins was responsible for recruiting several future NBA players including, Kenyon Martin, Ruben Patterson, Nick Van Exel and Dermarr Johnson.

The Huggins era at the University of Cincinnati had several off the court incidents including the May 1995 arrest of center Art Long and forward Danny Fortson (both future NBA players). Long was arrested for allegedly punching a police horse while Fortson was arrested for disorderly conduct. Both men were acquitted of all charges.[4]

Bob Huggins' arrest on June 8, 2004 for driving under the influence of alcohol [5] led to new university president Dr. Nancy L. Zimpher to state: "People can speculate, but our actions will speak for themselves and we'll do that just as soon as possible. We have a great deal of integrity in this institution, both academic and athletic integrity, and you'll see that over time". [5]

Bob Huggins was suspended. He later resigned and accepted a buyout offer from the university for a reported $3 million. Assistant coach Andy Kennedy took over on an interim basis and coached the Bearcats during the 2005–06 season. However, his 21–13 record was not enough to convince the university to retain him on a non-interim basis, and Kennedy was allowed to go to the University of Mississippi. Murray State coach Mick Cronin, a Cincinnati graduate in 1998 and former Bearcats assistant coach under Bob Huggins, was hired. For the 2007–2008 season, Coach Cronin has put together a top 15 ranked recruiting class by Rivals in 2007.

Since 1992, WLW has been the radio home for Bearcats athletics. Dan Hoard has been the play-by-play announcer for both basketball and football since 2000. Former Bearcat Chuck Machock started in 1992 as the color commentator for basketball games. Jim Kelly, a Bearcat wide receiver during the mid 70s, provides color commentary for football. Tommy Gelehrter has been the sideline reporter since the 2007 season. WEBN or WKFS airs football or basketball games when there is a conflict on WLW with the Cincinnati Reds or Cincinnati Bengals. Tommy Gelehrter is the backup play-by-play announcer for both basketball and football when Dan Hoard is not available. Artrell Hawkins is the backup sideline reporter for Football when Tommy Gelehrter is doing play-by-play.

Starting in 2008, Fox Sports Ohio became the local TV flagship station for basketball games, while WKRC-TV is the flagship for football games. Tom Gelehrter replaced Michael Reghi as the play by play for non-conference basketball games on FSN Ohio[6] former Bearcat Anthony Buford, was released from his color commentary duties after pleading guilty in a mortgage fraud scheme[7] Terry Nelson[8] a former bearcat, will replace Buford for color commentary.

The university has a diverse number of intercollegiate club sports teams. Notable teams include men's baseball, the rugby football club, the rowing team, the Waterski Team (2008 DII National Champions), the lacrosse team, the men's soccer team, the men's ice hockey team which competes in the American Collegiate Hockey Association (ACHA) DIII, and the Tennis Club which competes in the USTA Tennis on Campus and the Great Lakes Tennis Conference.

Club sports at UC operate in a tier system. The top tier (tier 5, or semi-varsity) teams include the equestrian team, men's hockey and the men's and women's rowing programs. 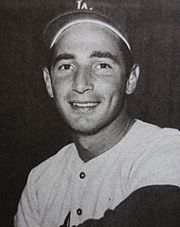