The Cleveland Way is a National Trail in ancient Cleveland in Northern England. It runs 110 miles (177 km) from Helmsley to Filey, skirting the North York Moors National Park.

The trail was opened in 1969. It was the second official National trail to be opened.[1]

The trail can be walked in either direction linking the trailheads of Helmsley (grid reference SE6125183849) and Filey (grid reference TA1155480742) in a horseshoe configuration. The trail is waymarked along its length using the standard National Trail acorn symbol.[2]

The trail falls into two roughly equal sections. The inland section leads west from Helmsley, then north, then east around the west of the North York Moors National Park. It then leaves the National Park near Guisborough to meet the coast at Saltburn. The coastal section follows the coast from Saltburn to Whitby, Scarborough and Filey.

The moorland sections of the trail provide a habitat for species including red grouse, curlews and Emperor moth caterpillars. The coastal sections may provide sightings of sea birds such as Great Cormorants, Shags, Puffins, Guillemots and Sea gulls.[3] 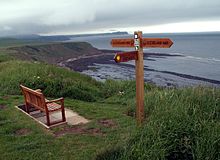 The Cleveland Way connects with various other long distance footpaths. These are listed in order from Helmsley to Filey.

The Ebor Way goes from Ilkley (where it connects with the Dales Way) to Helmsley. The White Rose Walk from Kilburn White Horse to Roseberry Topping crosses the Cleveland Way. The whole coastal section of the Cleveland Way forms part of the North Sea Trail. The Esk Valley Walk from Castleton ends at Whitby. The Coast to Coast Walk starts or ends at Robin Hood's Bay, and the Lyke Wake Walk crosses the moors from Osmotherley to Ravenscar. The Yorkshire Wolds Way goes from Filey to Hessle, near Hull, where it connects with the Trans Pennine Trail which forms part of the European walking route E8.

Official circular walks along the Cleveland Way include: