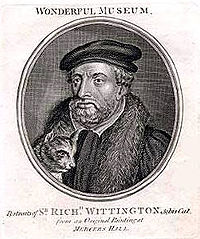 Sir Richard Whittington and his Cat

He was born in Gloucestershire, at Pauntley in the Forest of Dean,[2] although his family originated from Kinver in Staffordshire, England, where his grandfather Sir William de Whittington was a knight at arms.[3] His date of birth is variously given as in the 1350s and he died in London in 1423. However, he was a younger son and so would not inherit his father's estate as the eldest son might expect to do. Consequently he was sent to the City of London to learn the trade of mercer. He became a successful trader, dealing in valuable imports such as silks and velvets, both luxury fabrics, much of which he sold to the Royal and noble court from about 1388. There is indirect evidence that he was also a major exporter to Europe of much sought after English woollen cloth such as Broadcloth. From 1392 to 1394 he sold goods to Richard II worth £3,500 (equivalent to more than £1.5m today).[4] He also began money-lending in 1388, preferring this to outward shows of wealth such as buying property. By 1397 he was also lending large sums of money to the King.[2]

In 1384 Whittington had become a Councilman. In 1392 he was one of the city's delegation to the King at Nottingham at which the King seized the City of London's lands because of alleged misgovernment. By 1393, he had become an alderman and was appointed Sheriff by the incumbent mayor, William Staundone,[5] as well as becoming a member of the Mercers' Company. When Adam Bamme, the mayor of London, died in June 1397, Whittington was imposed on the city by the King as Lord Mayor of London two days later to fill the vacancy with immediate effect. Within days Whittington had negotiated with the King a deal in which the city bought back its liberties for £10,000 (nearly £4m today).[4] He was elected mayor by a grateful populace on 13 October 1397.[2]

The deposition of Richard II in 1399 did not affect Whittington and it is thought that he merely acquiesced in the coup led by Bolingbroke. Whittington had long supplied the new king, Henry IV, as a prominent member of the landowning elite and so his business simply continued as before. He also lent the new king substantial amounts of money. He was elected mayor again in 1406—during 1407 he was simultaneously Mayor in both London and Calais[6]—and in 1419.[2] In 1416, he became a Member of Parliament, and was also in turn influential with Henry IV's son, Henry V, also lending him large amounts of money and serving on several Royal Commissions of oyer and terminer. For example, Henry V employed him to supervise the expenditure to complete Westminster Abbey. Despite being a moneylender himself he was sufficiently trusted and respected to sit as a judge in usury trials in 1421. Whittington also collected revenues and import duties. A long dispute with the Company of Brewers over standard prices and measures of ale was won by Whittington.[2]

In his lifetime Whittington donated much of his profit to the city and left further endowments by his Will. He financed:

He also provided accommodation for his apprentices in his own house. He passed a law prohibiting the washing of animal skins by apprentices in the River Thames in cold, wet weather because many young boys had died through hypothermia or in the strong river currents.

Whittington died in March 1423. In 1402 (aged 52) he had married Alice, daughter of Sir Ivo FitzWarin (or Fitzwarren) of Wantage in Berkshire (now Oxfordshire), but she predeceased him in 1411. They had no children. He was buried in the church of St Michael Paternoster Royal, to which he had donated large sums during his lifetime. The tomb is now lost, and the mummified cat found in the church tower in 1949 during a search for its location probably dates to the time of the Wren restoration.[7]

In the absence of heirs, Whittington left £7,000 in his will to charity, in those days a large sum, with a modern-day equivalence of about £3m.[4] Some of this was used to

The almshouses were relocated in 1966 to Felbridge near East Grinstead. Sixty elderly women and a few married couples currently live in them. The Whittington Charity also disburses money each year to the needy through the Mercers' Company.

The Whittington hospital is now at Archway in the London Borough of Islington and a small statue of a cat along Highgate Hill further commemorates his legendary feline.

Despite knowing three kings (though five reigned during his life), there is no evidence that he was knighted.

Not to be confused with Sweet Dick Whittington. 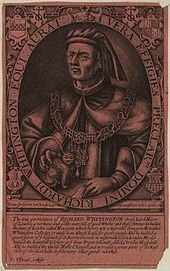 The gifts left in Whittington's will made him well known and he became a character in an English story that was adapted for the stage as a play, The History of Richard Whittington, of his lowe byrth, his great fortune, in February 1604.[8] In the 19th century this became popular as a pantomime called Dick Whittington and His Cat, very loosely based on Richard Whittington. There are several versions of the traditional story, which tells how Dick, a boy from a poor Gloucestershire family, sets out for London to make his fortune, accompanied by, or later acquiring, his cat. At first he meets with little success, and is tempted to return home. However, on his way out of the city, whilst climbing Highgate Hill from modern-day Archway, he hears the Bow Bells of London ringing, and believes they are sending him a message. There is now a large hospital on Highgate Hill, named the Whittington Hospital, after this supposed episode. A traditional rhyme associated with this tale is:

On returning to London, Dick embarks on a series of adventures. In one version of the tale, he travels abroad on a ship, and wins many friends as a result of the rat-catching activities of his cat; in another he sends his cat and it is sold to make his fortune. Eventually he does become prosperous, marries his master's daughter Alice Fitzwarren (the name of the real Whittington's wife), and is made Lord Mayor of London three times.

As the son of gentry Whittington was never very poor and there is no evidence that he kept a cat. Whittington may have become associated with a thirteenth-century Persian folktale about an orphan who gained a fortune through his cat,[9] but the tale was common throughout Europe at that time.[10] Folklorists have suggested that the most popular legends about Whittington—that his fortunes were founded on the sale of his cat, who was sent on a merchant vessel to a rat-beset Eastern emperor—originated in a popular 17th-century engraving by Renold Elstrack in which his hand rested on a cat, but the picture only reflects a story already in wide circulation.[11] Elstracke's oddly-shaped cat was in fact a later replacement by printseller Peter Stent for what had been a skull in the original, with the change being made to conform to the story already in existence, in order to increase sales.[12]