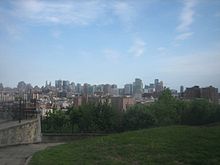 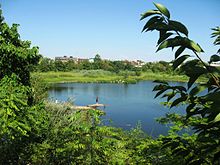 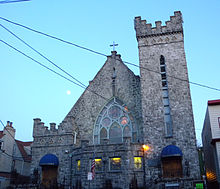 The Heights or Jersey City Heights is a district in the north end of Jersey City, New Jersey atop the New Jersey Palisades overlooking Hoboken to the east and Croxton in the Meadowlands to the west.[1][2]

The southern border of The Heights is generally considered to be north of Bergen Arches and The Divided Highway, while Paterson Plank Road in Washington Park near Transfer Station is its main northern boundary. Its postal area Zip Code is 07307. The Heights mostly contains two- and three-family houses and low rise apartment buildings, and is similar to North Hudson architectural style and neighborhood character.

Central Avenue is its primary commercial thoroughfare.,[3][4] with residential neighborhoods on both sides. Pershing Field is a park in the center of the district, offering green space, baseball fields, a swimming pool and ice-skating rink. The adjacent old water reservoir #3 has been preserved as a state designated wetland and park. Many stately Victorian and Edwardian homes distinguish the Heights, particularly along Summit Avenue and Sherman Place [5]

Riverview-Fiske Park along Palisade and Ogden Avenues, is a neighborhood on the east side of the Palisades offer views of Hoboken and the Manhattan skyline. The Schurman House, the Odgen-Conrad House, and the Van Vorst Farmhouse, (a stone building from 1742, the city's oldest) are located in the vicinity. Pohlmann's Hall (40°44′23″N 74°2′45″W) at 154 Ogden Avenue received its federal historical designation in September 1985. Christ Hospital is south on Palisade Avenue.

Western Slope descending a cuesta from Kennedy Boulevard the overlooks Croxton in the Meadowlands. At the corner of Manhattan Avenue, in the Dr. Leonard J. Gordon Park is larger than life 1907 sculpture Buffalo and Bears by Solon Hannibal Borglum.

An elevator at Congress Street and Paterson Plank Road descends to the 9th Street-Congress Street station of the Hudson-Bergen Light Rail.[5] Mountain Ave [6] and New York Ave [7] are the two streets that travel along the face of the cliffs. New Jersey Transit bus routes 82, 83, 84, 85, 86, 87 and 88,and serve the district locally to North Hudson and Journal Square while the 123 and 125 also continue to Port Authority Bus Terminal (PABT). Red and Tan in Hudson County 99x runs along Central Avenue between PABT and Bayonne.

The Heights was part of the colony of Pavonia, New Netherland, the superintendent of which was the American patriarch of the Van Vorst family. A farmhouse built in 1742 by the family (now on Palisade Avenue) is considered to be the oldest building in Hudson County. Summit Avenue, slightly to the west follows an Hackensack Indian trail that became the main road from the villages of Communipaw and Bergen and eventually connected to the Paterson and Hackensack Plank Roads.[8]

The area comprising most of the Heights was once an independent municipality, known as Hudson City. It was incorporated as a town in 1852, and later into a city in 1855. The Town Hall, erected on Oakland Avenue, still stands today. Garrett D. Van Reipen was that city's first mayor.[9] (According to the NY Times, E.R.V Wright was the first Mayor of Hudson City.[10]) Hudson City, along with the Town of Bergen and the Township of Greenville, merged with Jersey City in 1873.[9]

On March 27, 1868 Hudson City became the birthplace of its most famous namesake, the new Hudson City Savings Bank, when it received a special charter from the State of New Jersey Legislature to open in what was then the small City of Hudson, New Jersey. Hudson's mayor Garrett D. Van Reipen became the first President of the small bank, which was located on Newark Avenue.[9] By the end of the 19th Century, Hudson City Savings Bank had accumulated assets and deposits of over US$1 million. In the 1920s, the savings bank opened its second branch, and moved from Newark Avenue to 587 Summit Avenue in Jersey City, and later moved its headquarters to Bergen County.

America's first motion picture industry can trace its roots to the Hudson River towns of New Jersey, especially Fort Lee.[11] Nestor Studios (which merged into Universal Studios) began in Bayonne. Pathé, the France-based company that during the first part of the 20th century was the largest film equipment and production company in the world, established an American factory and studio facility in The Heights in 1910, the building of which still stands overlooking Paterson Plank Road .It also established the Eclectic Film Company as a subsidiary distribution company for both its American and European product. Although the Jersey City plant produced moderately popular comedies, dramas, and newsreels largely directed at the US market, Perils of Pauline was the first American-made Pathé effort to achieve worldwide success under the Eclectic banner.[12][13][14]