The Episcopal Diocese of Iowa is the diocese of the Episcopal Church in the United States of America which covers all of Iowa. It is in Province VI. Its offices are in Des Moines, and it has two cathedrals: The Cathedral Church of St. Paul in Des Moines and Trinity Cathedral in Davenport. 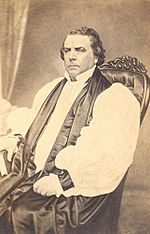 The Episcopal Church in Iowa can trace its roots to 1836 when services were held occasionally in Dubuque by the Rev. Richard F. Cadle. He was followed by the Rev. E. G. Gear and the Rev. J. Batchelder. The Rt. Rev. Dr. Philander Chase, Bishop of Illinois, visited Scott County in the fall of 1837.[2]

The church started to develop across the state of Iowa. In July, 1853, the Rt. Rev. Jackson Kemper, missionary bishop of the Northwest, invited clergy and representatives of all the congregations in the state to meet at Trinity Church in Muscatine. On Wednesday, August 17, the Rev. Alfred Louderback, rector of Trinity Church, Davenport, was elected chairman in the bishop's absence. The constitutions and canons for the diocese were adopted and plans were made for the election of a bishop. The General Convention of the Protestant Episcopal Church in the United States of America admitted the Diocese of Iowa to its membership in October, 1853.

On May 31, 1854, the first convention of the Diocese of Iowa began in Trinity Church, Davenport. The Rev. Henry Washington Lee, rector of St. Luke's Church, Rochester, New York, was elected the first bishop of Iowa. He was consecrated in his church in Rochester on October 18, 1854. Bishop Lee preached in the diocese for the first time on October 29, 1854 in St. John's Church, Dubuque.[2]

The cornerstone for Trinity Cathedral, then called Grace Cathedral, was laid in 1867. The building was completed in 1873. It is the second church built as a cathedral in the Episcopal Church in the United States.[3] In 1992 St. Paul's Church in Des Moines was named the diocese's liturgical cathedral [4] and Trinity was maintained as its historic cathedral. Trinity, St. Paul's and ten other Episcopal churches in Iowa are listed on the National Register of Historic Places.[1]

The present Coat of Arms for the Diocese of Iowa were designed by Cram and Ferguson and approved at the 1946 Diocesan Convention. The arms consist of the a field of green, which represents Iowa's prairies, bisected by two lines that represent the Mississippi River and the Missouri River. The gold cross contains five red diamonds which represent the five communities where the Episcopal Church in Iowa was organized: Dubuque, Davenport, Muscatine, Burlington, and Keokuk. The cross is surrounded by four ears of corn that represents Iowa’s agricultural heritage. A bishop's mitre tops the shield and it is surrounded by the words, "Seal of the Diocese of Iowa 1853." [5] 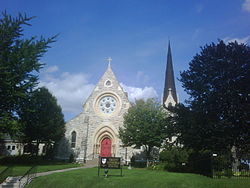 The following is a list of the bishops who have served the diocese of Iowa and their dates of service:[8]