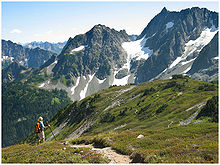 In 1971, the park had 318 glaciers with an area of 117 km2 (Post et al., 1971), the most of any US park outside Alaska. All the glaciers in the park have retreated significantly from 1980–2005 and the rate is increasing. The recent warmer climate has led to more summer melting and more winter melting events, reducing winter snowpack. Several glaciers in the range have melted away in the last decade.[3] Boston Glacier, on the north slope of Boston Peak, is the largest glacier in the park with an area of 7 km2. The other large glaciers (with areas greater than 2.5 km2) are: 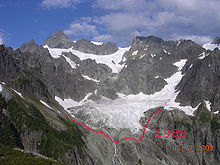 Due to its wilderness nature, it is home to wolves, lynx, moose, wolverines, and many other rare or endangered species. Few grizzly sightings have been confirmed by park staff, though black bears are common. There are a gamut of mammals, birds, amphibians and reptiles. As a notable amphibian example, within the Rough-skinned Newt Cascade Mountains populations, approximately ninety percent of the adult population is perennibranchiate.[4] 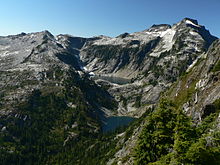 Nearly all of the national park is protected as the Stephen Mather Wilderness, so there are few maintained buildings and roads within the North and South units of the Park. The park is most popular with backpackers and mountain climbers. One of the most popular destinations in the park is Cascade Pass, which was used as a travel route by Native Americans. It can be accessed by a four-mile (6 km) trail at the end of a gravel road. The North and South Picket Ranges, Mount Triumph, as well as Eldorado Peak and the surrounding mountains, are popular with climbers due to glaciation and technical rock. Mount Shuksan, in the northwest corner of the park, is one of the most photographed mountains in the country and the second highest peak in the park 9,127 ft/2,782 m. 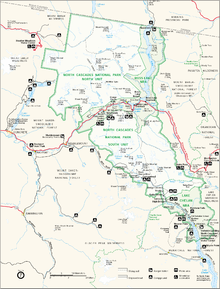 Although one gravel road open to the public enters the park, most automobile traffic in the region travels on the North Cascades Highway (Washington State Route 20), which passes through the Ross Lake National Recreation Area. The nearest large town on the west side of the park is Sedro-Woolley, Washington, while Winthrop lies to the east. Chelan is located at the southeastern end of Lake Chelan.

This article incorporates public domain material from websites or documents of the National Park Service.