Deception Pass is a strait separating Whidbey Island from Fidalgo Island, in the northwest part of the U.S. state of Washington. It connects Skagit Bay, part of Puget Sound, with the Strait of Juan de Fuca. 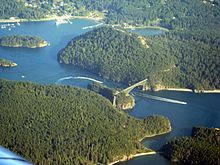 The Deception Pass area has been home to various Coast Salish tribes for thousands of years. The first Europeans to see Deception Pass were members of the 1790 expedition of Manuel Quimper on the Princesa Real. The Spanish gave it the name Boca de Flon.[1] A group of sailors led by Joseph Whidbey, part of the Vancouver Expedition, found and mapped Deception Pass on June 7, 1792.[2] George Vancouver gave it the name "Deception" because it had misled him into thinking Whidbey Island was a peninsula.[3] The "deception" was heightened due to Whidbey's failure to find the strait at first. In May 1792, Vancouver was anchored near the southern end of Whidbey Island. He sent Joseph Whidbey to explore the waters east of Whidbey Island, now known as Saratoga Passage, using small boats. Whidbey reached the northern end of Saratoga Passage and explored eastward into Skagit Bay, which is shallow and difficult to navigate. He returned south to rejoin Vancouver without having found Deception Pass. It appeared that Skagit Bay was a dead-end and that Whidbey Island and Fidalgo Island were a long peninsula attached to the mainland. In June the expedition sailed north along the west coast of Whidbey Island. Vancouver sent Joseph Whidbey to explore inlets leading to the east. The first inlet turned out to be a "very narrow and intricate channel, which...abounded with rocks above and beneath the surface of the water".[4] This channel led to Skagit Bay, thus separating Whidbey Island from the mainland. Vancouver apparently felt he and Joseph Whidbey had been deceived by the tricky strait. Vancouver wrote of Whidbey's efforts: "This determined [the shore they had been exploring] to be an island, which, in consequence of Mr. Whidbey’s circumnavigation, I distinguished by the name of Whidbey’s Island: and this northern pass, leading into [Skagit Bay], Deception Passage".[4] 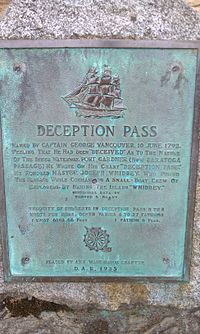 Plaque explaining the history of Deception Pass "Deception Pass - Named By Captain George Vancouver 10 June 1792. Feeling That He Had Been "Deceived" As To The Nature Of The Inner Waterway, Port Gardner (Now Saratoga Passage) he Wrote On His Chart "Deception Pass."

In the waters of Deception Pass, just east of the present-day Deception Pass Bridge, is a small island known as Ben Ure Island. The island became infamous for its activity of smuggling illegal Chinese immigrants for local labor. Ure and his partner Lawrence "Pirate" Kelly were quite profitable at their smuggling business and played hide-and-seek with the United States Customs Department for years. Ure's own operation at Deception Pass in the late 1880s consisted of Ure and his Native-American wife. Local tradition has it that his wife would camp on the nearby Strawberry Island (which was visible from the open sea) and signal him with a fire on the island's summit to alert him to whether or not it was safe to bring his illegal cargo ashore. For transport, Ure would tie the illegal immigrants up in burlap bags so that if customs agents were to approach then he could easily toss the bags overboard. The tidal currents would carry the discarded immigrants' bodies to San Juan Island to the north and west of the pass and many ended up in what became known as Dead Man's Bay.

Between the years 1910 and 1914, a prison rock quarry[5] was operated on the Fidalgo Island side of the pass. Nearby barracks housed some 40 prisoners, members of an honors program out of Walla Walla State Penitentiary and the prison population was made up of several types of prisoners, including those convicted of murder. Guards stood watch at the quarry as the prisoners cut the rock into gravel and loaded it onto barges located at the base of the cliff atop the pass's waters. The quarried rock was then taken by barge to the Seattle waterfront. The camp was dismantled in 1924 and although abandoned as a quarry, the remains of the camp can still be found. The location, however, is hazardous and over the years there have been several fatal accidents when visitors have ventured onto the steep cliffs.

Upon completion on July 31, 1935, the 976-foot (297 m) span Deception Pass Bridge connected Whidbey Island to the tiny Pass Island, and Pass Island to Fidalgo Island. Prior to the bridge, travellers and businessmen would use an inter-island ferry to commute between Fidalgo and Whidbey islands. 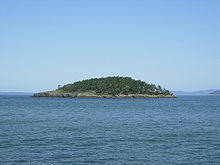 Deception Pass is a dramatic seascape where the tidal flow and whirlpools beneath the twin bridges connecting Fidalgo Island to Whidbey Island move quickly. During low tides, the swift current can lead to standing waves, large whirlpools, and roiling eddies. This swift current phenomenon can be viewed from the twin bridges' pedestrian walkways or from the trail leading below the larger south bridge from the parking lot on the Whidbey Island side. Boats can be seen waiting on either side of the pass for the current to stop or change direction before going through. Thrill-seeking kayakers go there during large tide changes to surf the standing waves and brave the class 2 and 3 rapid conditions. 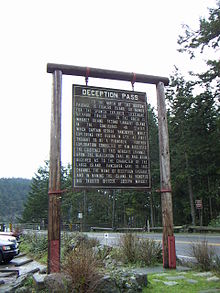 Deception Pass is today surrounded by Deception Pass State Park, the most-visited park in Washington with over 2 million visitors each year. The park was officially established in 1923, when the original 1,600 acres (6.5 km2) of a military reserve was transferred to Washington State Parks. The park's facilities were greatly enhanced in the 1930s when the Civilian Conservation Corps (CCC) built roads, trails, and buildings in order to develop the park.

The road to West Beach was created in 1950, opening up a beautiful stretch of beach to hordes of vehicles. The former fish hatchery at Bowman Bay became a part of the park in the early Seventies. The old entrance to the park was closed in 1997 when a new entrance was created at the intersection of Highway 20 and Cornet Bay road, improving access into and out of the park.

Deception Pass State Park has an amazing abundance of recreational opportunities. It has three campgrounds. The Cranberry campground is the largest, with 235 sites, along the shores of Cranberry Lake and North Beach. Many of these sites are in old growth forest. Quarry Pond campground is east of Highway 20, with 61 sites, mostly hookup sites. It serves as the wintertime campground. Across the bridge at Bowman Bay is the small and intimate Bowman campground, with only 20 sites, only two of which have power and water. The others, close to the bay, are non-power sites. The campsites are all reservable, and fill up quickly for the summer. Reservations at least several months in advance are recommended.

Hiking around the park is a joyous experience, although there are no long trails. Popular hikes include Goose Rock, offering views over much of the park; Lighthouse Point, with views over the strait and back to the bridge; the dunes trail at West Beach; and Rosario Head. Other lesser known hikes include the Pass Lake loop trail and the Hoypus Point trails complex. Bicycles and horses are allowed only on some of the trails, not at Goose Rock or Hoypus Point.

The beaches are a delight to explore. West Beach is the most popular, with a parking lot for over 200 cars perched right on the shoulder of the beach. North Beach nearby offers a mile of wilderness beach with views of the bridge above. Bowman Bay is a quiet refuge, although popular for kids with a big toy playground, and for kayakers. Rosario Beach is a wilder beach.

Rosario also has tidepools for exploring. There is a trail through the tidepools with a rope to show you where the trail is. Volunteers help visitors learn about the plants and animals in the tidepools. The life is coming back because people are respecting the trail and not trampling (or removing!) intertidal life.

The Cornet Bay Retreat Center has cabins for up to 180 people, and a recreation hall and dining hall with full kitchen facilities.

Cornet Bay is a busy boat launch facility, with six saltwater ramps for launching boats, moorage docks for overnight use, and ample parking. Crabbing and fishing are popular here as well.

Bowman Bay has an interpretive center that explains the story of the CCC throughout Washington state. Near the center is a statue honoring the men of the CCC, Washington state's location for this statue which has been placed in over 30 states now.

Pass Lake, on the north side of the bridge, is a fly-fishing only lake, catch and release required. Fishing in the waters of Cranberry Lake is popular for trout. The saltwater is famous for ling cod, salmon, crabs, shrimp, and other fisheries. Salmon can even be caught from the beach during the peak season.

Several concessions offer special recreational opportunities. Food services are available at West Beach during the busy season, along with canoe and paddle boat rentals. Kayaks may be rented for guided tours out of Bowman Bay. And Deception Pass Tours offers boat tours under the bridge and out into the straits, every hour on the hour, from Cornet Bay, again during the busier months of the year.

The bridge is perhaps the biggest attraction of the park, as it rises 180 feet (55 m) above the water, with walkways on both sides of the highway. Parking is available at the north, south, and mid-span Pass Island areas.

Ten islands are also a part of the state park, including Northwest Island, Deception Island, Pass Island, Strawberry, Ben Ure, Kiket, Skagit, Hope, and Big and Little Deadman Islands. Ben Ure Island has a small cabin available for rent for just two people. A human-powered boat is required to get to the cabin.

The 2002 horror movie The Ring was in part filmed near the pass.

Seattle shoegaze act The Sight Below filmed the 2008 video for their track Further Away at Deception Pass, with Deception Island's scenic imagery prominently featured.[6]