The Dnipropetrovsk Oblast is located in southeastern Ukraine. The area of the oblast' (31,900 km²), comprises about 5.3% of the total area of the country.

Its longitude from north to south is 130 km, from east to west – 300 km. The oblast' borders the Poltava and Kharkiv Oblast's on the north, the Donetsk Oblast on the east, the Zaporizhzhia and Kherson Oblast's on the south, and the Mykolayiv and Kirovohrad Oblast's on the west.

The following historical-cultural sites were nominated to the Seven Wonders of Ukraine.

The following data incorporates the number of each type of administrative divisions of the Dnipropetrovsk Oblast: 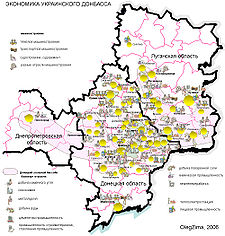 Map of the economic activity in the Donbass, including the Dnipropetrovsk Oblast.

As of the 2001 census, the ethnic groups within the Dnipropetrovsk Oblast are:[2]

the groups by native language:

The tender climate, mineral sources, and the curative mud allow opportunities for rest and cure within the region. Here there are 21 health-centers and medicated pensions, 10 rest homes, recreation departments and rest camps for children.

217 rivers flow within the area, including 55 rivers which are longer than 25 km, the major one being the Dnieper, which crosses through the center of the oblast'. Also flowing through the region are three major reservoirs, the Dniprodzerzhynsk, Dnieper and Kakhovka, and the Dnieper-Kryvyi Rih Canal.