Dniprodzerzhynsk (Russian: Днепродзержинск, Dneprodzerzhinsk, Ukrainian: Дніпродзержинськ) is an industrial city in the Dnipropetrovsk Oblast of Ukraine, and a port on the Dnieper River. 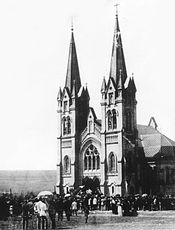 The first written evidence of settlement in the territory of Dniprodzerzhynsk appeared in 1750. At that time the villages of Romankovo and Kamianske, which make the modern city, were a part of the Nova (New) Sich of the Zaporizhian cossacks. The city was known as Kamianske (Russian: Каменское, Ukrainian: Кам'янське) until 1936 when it was renamed in honor of Felix Dzerzhynsky, the founder of the Bolshevik secret police, the Cheka. According to the latest data, its population is 273,700.

Soviet leader Leonid Brezhnev was born and raised in Dniprodzerzhynsk.

On 2 July 1996 a notorious traffic accident happened in Dniprodzerzhynsk. An overcrowded tram that was moving along a steep hill on Chapaeva Street began to slide rapidly downhill (because of a brake failure), eventually derailing and running into a school.[2] A total of some 30 people died and more than a 100 were injured as a result of that accident.[3] Following a government inquiry into the causes of the accident the then mayor, Sergiy Shershnev, and his deputy, Ihor Laktionov, resigned.[2][4]

The economic base of Dniprodzerzhynsk is almost exclusively centered on heavy industry, with ferrous metallurgy being the backbone of the local economy. Around 57% of the total industrial production is metallurgy and metal working. The chemical industry comes second with ca. 17% share of the total industrial output.[5] While the exceedingly industrialized nature of the local economy ensures a rather high employment rate (as of 01.11.2007, official unemployment stood at 1,40%),[6] it also contributes to excessive pollution and radiation levels in the city.[7]

Several Eastern Orthodox churches, the largest being the Orthodox Church of Saint Nicholas, which dates from 1894,[8] serve the faithful of the city. By 2008, there were 14 parishes of Ukrainian Orthodox Church in Dniprodzerzhynsk.

The town has an active Jewish community with a new synagogue and community center.[10]