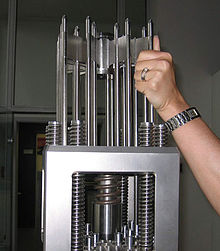 A control rod is a rod made of chemical elements capable of absorbing many neutrons without fissioning themselves. They are used in nuclear reactors to control the rate of fission of uranium and plutonium. Because these elements have different capture cross sections for neutrons of varying energies, the compositions of the control rods must be designed for the neutron spectrum of the reactor it is supposed to control. Light water reactors (BWR, PWR) and heavy water reactors (HWR) operate with "thermal" neutrons, whereas breeder reactors operate with "fast" neutrons.

Control rods are usually combined into control rod assemblies — typically 20 rods for a commercial Pressurized Water Reactor (PWR) assembly — and inserted into guide tubes within a fuel element. A control rod is removed from or inserted into the central core of a nuclear reactor in order to control the neutron flux — increase or decrease the number of neutrons which will split further uranium atoms. This in turn affects the thermal power of the reactor, the amount of steam produced, and hence the electricity generated.

Chemical elements with a sufficiently high capture cross section for neutrons include silver, indium and cadmium. Other elements that can be used include boron, cobalt, hafnium, dysprosium, gadolinium, samarium, erbium, and europium, or their alloys and compounds, e.g. high-boron steel, silver-indium-cadmium alloy, boron carbide, zirconium diboride, titanium diboride, hafnium diboride, gadolinium titanate, and dysprosium titanate. The choice of materials is influenced by the energy of neutrons in the reactor, their resistance to neutron-induced swelling, and the required mechanical and lifetime properties. The rods may have the form of stainless steel tubes filled with neutron absorbing pellets or powder. The swelling of the material in the neutron flux can cause deformation of the rod, leading to its premature replacement. The burn up of the absorbing isotopes is another limiting lifetime factor.

Silver-indium-cadmium alloys, generally 80% Ag, 15% In, and 5% Cd, are a common control rod material for pressurized water reactors. The somewhat different energy absorption regions of the materials make the alloy an excellent neutron absorber. It has good mechanical strength and can be easily fabricated. It has to be encased in stainless steel to prevent corrosion in hot water.

Boron is another common neutron absorber. Due to different cross sections of 10B and 11B, boron containing materials enriched in 10B by isotopic separation are frequently used. The wide absorption spectrum of boron makes it suitable also as a neutron shield. Mechanical properties of boron in its elementary form are unfavourable, therefore alloys or compounds have to be used instead. Common choices are high-boron steel and boron carbide. Boron carbide is used as a control rod material in both pressurized water reactors and boiling water reactors.

Hafnium has excellent properties for reactors using water for both moderation and cooling. It has good mechanical strength, can be easily fabricated, and is resistant to corrosion in hot water. [1] Hafnium can be alloyed with small amounts of other elements; e.g. tin and oxygen to increase tensile and creep strength, iron, chromium and niobium for corrosion resistance, and molybdenum for wear resistance, hardness, and machineability. Some such alloys are designated as Hafaloy, Hafaloy-M, Hafaloy-N, and Hafaloy-NM.[2] Its high cost and low availability limit its use in civilian reactors, though it is used in some US Navy reactors.

Dysprosium titanate is a new material currently undergoing evaluation for pressurized water control rods. Dysprosium titanate is a promising replacement for Ag-In-Cd alloys because it has a much higher melting point, does not tend to react with cladding materials, is easy to produce, does not produce radioactive waste, does not swell, and does not outgas. It was developed in Russia, and is recommended by some for VVER and RBMK reactors.[3]

Hafnium diboride is another such new material. It can be used standalone or prepared in a sintered mixture of hafnium and boron carbide powders.[4]

Usually there are also other means of controlling reactivity: In the PWR design a soluble neutron absorber (boric acid) is added to the reactor coolant allowing the complete extraction of the control rods during stationary power operation ensuring an even power and flux distribution over the entire core. This chemical shim, along with the use of burnable neutron poisons within the fuel pellets, is used to assist regulation of the long term reactivity of the core,[5] while the control rods are used for rapid changes to the reactor power (e.g. shutdown and start up). Operators of BWRs use the coolant flow through the core to control reactivity by varying the speed of the reactor recirculation pumps (an increase in coolant flow through the core improves the removal of steam bubbles, thus increasing the density of the coolant/moderator with the result of increasing power).

In most reactor designs, as a safety measure, control rods are attached to the lifting machinery by electromagnets, rather than direct mechanical linkage. This means that automatically in the event of power failure, or if manually invoked due to failure of the lifting machinery, the control rods will fall, under gravity, fully into the pile to stop the reaction. A notable exception to this fail-safe mode of operation is the BWR which requires the hydraulical insertion of control rods in the event of an emergency shut-down, using water from a special tank that is under high nitrogen pressure. Quickly shutting down a reactor in this way is called scramming the reactor.

Mismanagement or control rod failure was often the cause or aggravating factor for nuclear accidents, including the SL-1 explosion and the Chernobyl disaster. 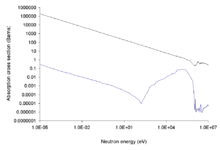 Homogeneous neutron absorbers have often been used to manage criticality accidents which involve aqueous solutions of fissile metals. In several such accidents, either borax (sodium borate) or a cadmium compound has been added to the system. The cadmium can be added as a metal to nitric acid solutions of fissile material; the corrosion of the cadmium in the acid will then generate cadmium nitrate in situ.

In carbon dioxide-cooled reactors such as the AGR, if the solid control rods were to fail to arrest the nuclear reaction, nitrogen gas can be injected into the primary coolant cycle. This is because nitrogen has a larger absorption cross-section for neutrons than carbon or oxygen; hence, the core would then become less reactive.

As the neutron energy increases, the neutron cross section of most isotopes decreases. The boron isotope 10B is responsible for the majority of the neutron absorption. Boron-containing materials can be used as neutron shields to reduce the activation of objects close to a reactor core.