The monster's namelessness became part of the stage tradition as Mary Shelley's story was adapted into serious and comic plays in London and Paris during the decades after the novel's first appearance. Mary Shelley herself attended a performance of Presumption, the first successful stage adaptation of her novel. "The play bill amused me extremely, for in the list of dramatic personae came _________, by Mr T. Cooke,” she wrote to her friend Leigh Hunt. "This nameless mode of naming the unnameable is rather good."[2]

The name of the creator—Frankenstein—soon came to be used to name the creation. That happened within the first decade after the novel was published, but it became cast in concrete after the story was popularized in the famous 1930s Universal film series starring Boris Karloff. The film was based largely on a play by Peggy Webling, performed in London in 1927.[3] Webling's Frankenstein actually does give his creature his name. The Universal film treated the Monster's identity in a manner that reflects its resemblance to Mary Shelley's novel: the name of the actor, not the character, is hidden by a question mark. Nevertheless, the creature soon enough became best known in the popular imagination as "Frankenstein".

Victor Frankenstein, eldest son of Alphonse and Caroline Beaufort Frankenstein, builds the creature in his laboratory through methods of science (he was a chemistry student at University of Ingolstadt) and alchemy (largely based on the writings of Paracelsus, Albertus Magnus, and Cornelius Agrippa) which are not clearly described. Immediately upon bringing the creature to life, Frankenstein flees from it in horror and disavows his experiment. Abandoned, frightened, and completely unaware of his own identity, the monster wanders through the wilderness searching for someone who would understand and shelter him.

He finds brief solace by hiding out in the woodshed of a remote cottage inhabited by the DeLaceys, a family of peasants. While they are unaware of his existence, he learns every part of their lives by eavesdropping on their conversations and comes to think of them as his own family, calling them his 'protectors'. He develops the power of speech from listening to the family teach their language (French) to an Arabian daughter-in-law, and very quickly becomes eloquent, educated, and well-mannered.

One day, the creature musters the courage to finally make his presence known. He introduces himself to the family's patriarch, their blind father, and experiences kindness and acceptance for the first (and last) time. The blind man can not see his "accursed ugliness" and so treats him as a friend. When the rest of the family returns, they are terrified of the creature and drive him away. Bewildered but still hopeful, he rescues a peasant girl from a river, but shot in the shoulder by a man who claims her. Heartbroken, the creature renounces all of humankind and swears revenge on his creator, Frankenstein, for bringing him into the world.

The monster searches for Frankenstein relentlessly, guided by some papers which were in the pocket of the clothing he took from his creator's rooms. From these he discovers Frankenstein's whereabouts, but also discovers the horrific details of his own birth. Upon arriving near Frankenstein's village, he meets and tries to befriend a small boy, William, hoping that the innocent youth will not be prejudiced against him. The boy is instantly frightened and threatens to call for his father, Monsieur Frankenstein, revealing to the creature that the boy is related to his enemy. The creature kills him, and, in a further gesture of hatred against humanity, frames for the murder a girl named Justine Mouritz, who is the Frankensteins' maid servant. Justine Moritz is sent to the gallows because Frankenstein decides it would be futile to confess his experiment, as no one would believe him.

Full of grief and despair, Frankenstein retreats to the mountains to find peace within himself. The monster approaches Frankenstein on top of the mountain and insists that Frankenstein hear his plight. Here, the monster tells Frankenstein his story and pleads with him to create a female equivalent to himself so that he can hide from humanity with one of his own kind. Frankenstein agrees, but relents just before finishing the mate, aghast at the possibility of creating a race of monsters. Enraged, the creature threatens to destroy everything Frankenstein holds dear. Before fleeing into the night, the creature swears to Frankenstein that "I will be with you on your wedding night!"

He later makes good on his threat by killing Frankenstein's best friend, Henry Clerval, and his bride, Elizabeth Lavenza. Victor Frankenstein's father, Alphonse, then dies of grief. With nothing left to live for, Frankenstein dedicates his life to hunting his creation down and destroying him. The search ends in the Arctic Circle when Frankenstein loses control of his dogsled and falls into ice-cold water, contracting severe pneumonia. He is rescued by a ship exploring the region and relates the entire story to its captain, Robert Walton, before succumbing to his illness and dying. The creature later boards the ship, intent on taking his final revenge, but is overcome with grief upon finding Frankenstein dead, having lost the only family he has ever known. He pledges to travel to "the Northernmost extremity of the globe" and there burn his body to ashes, so that no man can ever create another like him. He leaps from the boat and is never seen again. 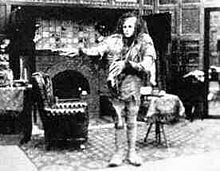 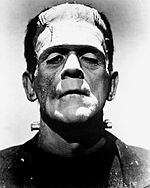 Shelley described Frankenstein's monster as an 8-foot-tall (2.4 m), hideously ugly creation, with translucent yellowish skin pulled so taut over the body that it "barely disguised the workings of the vessels and muscles underneath"; watery, glowing eyes, flowing black hair, black lips, and prominent white teeth. The monster attempts to integrate himself into human social patterns, but is shunned by all that see him. This feeling of abandonment compels him to seek revenge against his creator. A picture of the creature appeared in the 1831 edition. By the time the 1831 edition came out, however, several stage renditions of the story had popularized the monster. Early stage portrayals dressed him in a toga, shaded, along with the monster's skin, a pale blue. Throughout the 19th century, the monster's image remained variable according to the artist.

Since Karloff's portrayal, the creature almost always appears as a towering, gruesome figure, often with a flat square-shaped head and bolts to serve as electrical connectors or grotesque electrodes on his neck. He wears a dark suit having shortened coat sleeves and thick, heavy boots, causing him to walk with an awkward, stiff-legged, crude gait (as opposed to the novel, in which he is described as very flexible and much faster than a mortal). This image has been used as the basis for several other fictional characters.

In the 2004 film Van Helsing, the monster is shown in a rather somewhat modernized version of the Karloff design. He is 8 to 9 feet (240–270 cm) tall, has square bald head, gruesome scars, and pale blue skin. The electricity is emphasised with one electrified crystal in the back of his head and another over his heart.

As depicted by Shelley, the creature is a sensitive, emotional creature whose only aim is to share his life with another sentient being like himself. The novel portrays him as intelligent and literate, having read Paradise Lost, Plutarch's Lives, and The Sorrows of Young Werther. He is driven by despair and loneliness to acts of cruelty and murder.

From the beginning the monster is rejected by everyone he meets. He realizes from the moment of his "birth" that even his own creator could not be around him; this is obvious when Frankenstein says "…one hand was stretched out, seeming to detain me, but I escaped…"[4] Upon seeing his own reflection, he realizes that he too cannot stand to see himself.

Yet, in the 1931 film adaptation, the creature is depicted as mute and bestial, unlike Shelly's original character which is very intelligent. In the subsequent sequel, Bride of Frankenstein, the creature learns to speak and discover his feelings, although his intelligence and capacity of speech remains limited. In the second sequel, Son of Frankenstein, the creature is again rendered inarticulate. Following a brain transplant in the third sequel The Ghost of Frankenstein, the Monster speaks with the voice and personality of the brain donor. This was continued after a fashion in the scripting for the fourth sequel Frankenstein Meets The Wolf Man, but the dialogue was excised before release. The monster was effectively mute in later sequels, though he is heard to refer to Count Dracula as his 'Master' in Abbott and Costello Meet Frankenstein.

In Alvin and the Chipmunks Meet Frankenstein he is first depicted as mute, clumsy, childish, and nothing more than a servant of the 'evil' Dr. Frankenstein until he befriends the Chipmunks. They teach him how to be a friend and how to be kind to people. At the end of the film, Alvin mentions that they taught him how to talk, and after almost being run over by a tourist bus, Simon says "Too bad you also taught him how to drive."

The creature has always been seen to be a pyrophobic (the fear of fire).

Mary Shelley's original novel never ascribed an actual name to the monster; although he does call himself, when speaking to his creator, Victor Frankenstein, the "Adam of your labours". It has become common vernacular to refer to the creature by the actual name "Frankenstein", though this actually happens only rarely on screen. One example in which the monster is actually referred to by the name Frankenstein is the 2004 film Van Helsing.

A joke about the name became the subject of a sketch on Conan. On his various shows over the years, Conan O'Brien has featured a character named "Frankenstein", played by Brian Stack, who is a genial version of the classic Universal appearance of the character. In the March 23, 2011, of O'Brien's TBS show, a viewer criticized O'Brien for calling the character "Frankenstein", when in the original book the creature had no name and Frankenstein was the name of the creator. In response, O'Brien showed a clip of the monster coming to America through Ellis Island in the 1920s. An immigration official reviewing the creature's paperwork tells him that "Frankenstein's Monster" is too cumbersome a name, so he shortens it to Frankenstein. Thus, Conan declares that referring to the monster simply as "Frankenstein" is correct.

In Dean Koontz's Frankenstein series, the monster goes by the name "Deucalion", which he presumably chose sometime in his 200 year existence. The name is a reference to the son of Prometheus in Greek mythology, as his "father", Victor Frankenstein, is presumably the being whom the novel referred to as "The Modern Prometheus".