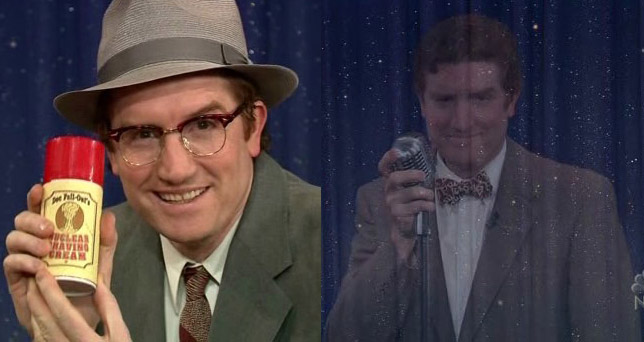 caption = Stack as Hannigan and Artie Kendall, two of his recurring characters on "Late Night with Conan O’Brien"
birthdate = ,
birthplace =

Stack attended Catholic schools from grades 5-12, graduating from St. Viator High School in Arlington Heights, Illinois. He earned an degree from Indiana University, where he had worked at their radio station. He began doing , or improv, in 1987 at the Ark Theater in Madison while attending graduate school at , where he earned his .

Stack became a sketch writer on "Late Night with Conan O’Brien" in 1997, and continues to serve as a writer, actor and editor on the show to this day. Stack plays many recurring characters on the show, most notably those clad in anachronistic or elaborate outfits, and is known for playing many characters with long beards and mustaches, such as , , , , and The Interrupter.

Among the characters he's portrayed on the show:

*Kilty McBagpipes, an extremely stereotypical Scottish man who dresses in a kilt and dances to music.
*Frankenstein, a smiling, affable version of , used in a number of miscellaneous sketches over the years, most notably a recurring sketch called "Frankenstein Wastes A Minute of our Time", in which the monster takes a winding journey through Studio 6A, sometimes travelling backstage, through the audience, and out into the halls, egging on the camera to follow behind him, until he reaches his destination and presents something totally mundane, such as a light switch, or a mop and bucket. This occurs even when there are more interesting things nearby, as in one installment in which he ended up in bandleader 's dressing room, where a brandishing a was present, and Frankenstein simply picked up a hairbrush and grunted to the camera approvingly. [ [http://www.everything2.com/index.pl?node_id=1697272 Frankenstein Wastes A Minute Of Our Time@Everything2.com ] ] Another scenario involved Frankenstein's Monster wandering through many different halls backstage. He came across Tom Hanks leaning up against a wall, yanked him aside, and revealed a wall plug outlet.
*Hannigan, a hat-wearing traveling salesman in outdated clothing who bursts into the studio, addresses Conan as “little girl,” and runs through a scripted sales pitch in an attempt to sell Conan unfunny jokes and other useless paraphernalia.
*Artie Kendall, the ghost of an old-fashioned lounge singer who worked in the studio decades ago when it was a radio studio, and whose song lyrics reflect antiquated bigoted and sexist views that offend Conan. Kendall typically sings three brief songs during his appearances, the first of which usually reflects an antiquated social view, the second of which reflects a view, and the last of which contains lyrics denigrating to the , which Kendall sings in reaction to the "hot Irish temper" he observes in Conan when Conan is outraged by the songs. Kendall was killed by the , who, offended at Kendall's misogyny, had him dig his own grave before beating him to death with the shovel. [""; , ]
*The Interrupter, a melodramatic villain clad in a black cape, a purple ruffled shirt, and wearing long black hair and a handlebar mustache, the Interrupter constantly interrupts Conan by finishing his sentences for him, always knowing exactly what Conan is going to say, even when it's denigrating to the Interrupter himself. Occasionally, if the sketch runs long enough, the roles will eventually become reversed, with the Interrupter starting sentences and Conan doing the interrupting. On rare occasions the first celebrity guest will replace O'Brien as the one interrupting.
*Fun-Tastic Guy An enthusiastic audience member who shows his appreciation of the upcoming guests that Conan announces by inventing various words with the suffix “tastic” to describe them, only to become silent and disinterested when Conan mentions his own comedy material on the show.
*A member of the Slipnutz (also known as They Might be Slipnutz), a comedy group of three men that was inconveniently booked on the same show with Slipknot, (and later with ). Their routine involves the three of them slipping and sliding on nuts scattered on the floor. The Slipnutz also appeared on the program to promote their greatest hits album, which included songs like "Old West Cowboys Slipping on Nuts" and "Viking Raiders Slipping on Nuts".
*Ira (of Jeremy & Ira), performed with former "Late Night" writer (as Jeremy), as two bizarre French silent film-like figures who would visit Conan & Andy from time-to-time, always appearing in the corner of the tv screen.
*Steve St. Helens a stagehand on the show whose temper rises until he erupts. This was shown a few times when began showing activity again in early .

Stack also provides the voices of numerous celebrities parodied in the faux interviews conducted by O’Brien, including , , and .

Among the other characters Stack has created on the show are Stacy Richter, 's Conan-obsessed little sister, who was portrayed by Stacks’ fellow alumna, . Stack also created the recurring segment "Pierre Bernard’s Recliner of Rage".

Stack is married to Miriam Tolan, a comedian/performer who often works with various improv groups, such as the and The Goofaround Gang, and is a former correspondent "". In addition to frequently performing together in various sketches on , Brian and Miriam have appeared together in many improv shows as well, such as Second City and Jazz Freddy in Chicago, and in the 's long-running hit improv show "ASSSSCAT 3000" in New York City. They have two daughters, Nora and Colette.