John Hodgman as PC and Justin Long as Mac.

The Get a Mac campaign is a television advertising campaign created for Apple Inc. by TBWA\Media Arts Lab, the company's advertising agency, that ran from 2006 to 2009.[1] Shown in the United States, Canada, Australia, New Zealand, the United Kingdom, and Japan, the advertisements in the campaign have become easily recognizable because each advertisement follows a standard simple template: against a minimalist all-white background, a man dressed in casual clothes introduces himself as a Mac ("Hello, I'm a Mac."), while a man in a more formal suit-and-tie combination introduces himself as a Windows personal computer ("And I'm a PC."). The two then act out a brief vignette, in which the capabilities and attributes of Mac and PC are compared, with PC—characterized as formal and somewhat polite, though stuffy and overly concerned with work—often being frustrated by the more laid-back Mac's abilities. The older ones shifted focus away from comparing features of the computer systems to a more general comparison. The later ones, however, mainly concerned Windows Vista and, at the end, Windows 7.

The original American advertisements star actor Justin Long, as the Mac, and author and humorist John Hodgman, as the non-Mac PC, and are directed by Phil Morrison. The American ads also air on Canadian, Australian, and New Zealand television,[citation needed] and at least 24 of them were dubbed into Spanish, French, German, and Italian. The British campaign stars comedic duo Robert Webb as Mac and David Mitchell as PC while the Japanese campaign features the comedic duo Rahmens. Although several of the British and Japanese ads originated in the American campaign, they are generally slightly altered to suit local sensibilities.[clarification needed] Both the British and Japanese campaigns also feature several original ads not seen in the American campaign.[citation needed]

The Get a Mac campaign is the successor to the Switch ads that were first broadcast in 2002. Both campaigns were filmed against a plain white background. Apple's former CEO, Steve Jobs, introduced the campaign during a shareholders meeting the week before the campaign started. The campaign also coincided with a change of signage and employee apparel at Apple retail stores detailing reasons to switch to Macs.

The Get a Mac campaign received the Grand Effie Award in 2007.[2] The song in the commercial is called "Having Trouble Sneezing" composed by Mark Mothersbaugh but is better known as "Get a MAC Melody".

The following is a brief summary of the different ads that appear in the various campaigns. All of the ads play on perceived weaknesses of standard non-Mac personal computers, especially those running Microsoft Windows, of which PC is clearly intended to be a parody, and corresponding strengths possessed by the Mac OS (such as immunity to circulating viruses and spyware targeted at Windows). Each of the ads is about 30 seconds in length and is accompanied by a song called "Having Trouble Sneezing," which was composed by Mark Mothersbaugh. The advertisements are presented below in alphabetical order, not chronological order.

The following is an alphabetical list of the ads that appeared in the campaign shown in the United States and Canada.

Several advertisements have been shown exclusively in Flash ad campaigns running on numerous websites.[3] Unlike the ads shown on television, these advertisements have not been posted as high-quality QuickTime videos on Apple's website. These ads run for approximately 20 seconds each and reference specific online advertising features (such as banner ads), making it unlikely they will ever appear on television.

The titles are taken from the Flash-video file names. 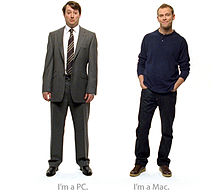 Mitchell and Webb as PC and Mac

For the British market, the ads were recast with the popular British comedy double act Mitchell and Webb in the lead roles; David Mitchell as PC and Robert Webb as Mac. As well as original ads, several ads from the American campaign were reshot with new dialogue and slightly altered scenes. These ads are about 40 seconds long, which is slightly longer than the US advertisements. All of the ads used to be viewable at Apple's UK website.

The following ads are exclusive to the UK:

Several American ads were modified for the UK market. In some of these ads, the events that occur in the narrative differ significantly from the original American campaign. Others follow the original ads more closely, with only minor differences (many based on the differences in characterization from the actors involved or language differences between American English and British English). These ads are also performed by Mitchell and Webb.

The adapted ads are

On December 12, 2006, Apple began to release ads in Japan that were similar in style to the US Get a Mac ads. The Mac and PC are played by the Rahmens, a Japanese comedy duo. The ads used to be viewable at Apple's Japan website.

The following ads are exclusive to Japan:

Several American ads were modified for the Japanese market. In some of these ads, the events that occur in the narrative differ significantly from the original American campaign. Others follow the original ads more closely, with only minor differences (many based on the differences in characterization from the actors involved).

The adapted ads are

While not strictly a part of the ad campaign, Hodgman and Long appeared in videos during Steve Jobs's keynote addresses at the 2006, 2007, and 2009 Worldwide Developers Conference and the 2008 MacWorld Expo.

The different spots were released gradually:

In an article for Slate magazine, Seth Stevenson criticized the campaign as being too "mean spirited", suggesting, "isn't smug superiority (no matter how affable and casually dressed) a bit off-putting as a brand strategy?".[10]

In an article in The Guardian, Charlie Brooker points out that the use of the comedians Mitchell and Webb in the UK campaign is curious. They both star in the sitcom Peep Show in which, to quote the article's author, "Mitchell plays a repressed, neurotic underdog, and Webb plays a selfish, self-regarding poseur... So when you see the ads, you think, 'PCs are a bit rubbish yet ultimately lovable, whereas Macs are just smug, preening tossers.'"[11]

Differentiating between a Mac and a PC

Many computer experts have argued over the definition of PC, or personal computer, which can raise questions about the actual differentiation between a Mac and a PC. Editor in Chief of PC Magazine, Lance Ulanoff states in a 2008 column in PC Magazine:

Microsoft responded to the Get a Mac advertising campaign in late 2008 by releasing the I'm a PC campaign, featuring Microsoft employee Sean Siler as a John Hodgman look-alike. While Apple's ads show personifications of both Mac and PC systems, the Microsoft ads show PC users instead proudly defining themselves as PCs.

Late Show with David Letterman made parodies of the Get a Mac campaign, from Mac's wig being taken off by PC to reveal baldness, to Mac as David Hasselhoff eating a cheeseburger drunk. An amateur video series has been posted on YouTube, consisting of superhero action figures discussing their differences in "I'm a Marvel...and I'm a DC". The series talks about the movie success of both Marvel and DC.[15]

On an episode of Air Farce Live, aired around the time of the Canadian federal election, had a sketch where one of the comedians was introduced as a Liberal, and the other as a PC (Progressive Conservative). The sketch was split into separate parts during the episode.

To promote Steam on Mac, Valve made a parody with Portal and Team Fortress 2 sentry guns.[16]

City of Heroes offered a series of online video parodies with a commercial featuring dialog centered around two machinima characters. They all start the same: one proclaiming "I'm a hero" and the other proclaiming "I'm a villain." The video was made to promote their new Mac edition of the game for OS X computers, released in February 2009.

T-Mobile USA launched in 2010 an ad campaign for the T-Mobile 4G product, which features model/actress Carly Foulkes as a 4G phone going up against Apple's iPhone 4 which at the time was exclusively on competitor AT&T Mobility.[17] (Apple has since released a CDMA-compatible iPhone for Verizon Wireless.) The commercials are strikingly similar as both feature a white background and two people representing the products. Due to AT&T announcing its purchase of T-Mobile USA on March 20, 2011, the ads are expected to end.[18]