A set with a cyclic order is called a cyclically ordered set or simply a cycle.[nb] Some familiar cycles are discrete, having only a finite number of elements: there are seven days of the week, four cardinal directions, twelve notes in the chromatic scale, and three plays in rock-paper-scissors. In a finite cycle, each element has a "next element" and a "previous element". There are also continuously variable cycles with infinitely many elements, such as the oriented unit circle in the plane.

In other words, a finite cycle is the same as a cycle of a permutation.

A cyclic order on a set X with n elements is an arrangement of X as on a clock face, for an n-hour clock. That is, rather than an order relation on X, we define on X just functions 'element immediately before' and 'element immediately following' any given x, in such a way that taking predecessors, or successors, cycles once through the elements as x(1), x(2), ..., x(n). Another way to put it is to say that we make X into the standard directed cycle graph on n vertices, by some matching of elements to vertices.

It can be instinctive to use cyclic orders for symmetric functions, for example as in

where writing the final monomial as xz would distract from the pattern.

A substantial use of cyclic orders is in the determination of the conjugacy classes of free groups. Two elements g and h of the free group F on a set Y are conjugate if and only if, when they are written as products of elements y and y−1 with y in Y, and then those products are put in cyclic order, the cyclic orders are equivalent under the rewriting rules that allow one to remove or add adjacent y and y−1.

An infinite set can also be ordered cyclically. Important examples of infinite cycles include the unit circle, S1, and the rational numbers, Q. The basic idea is the same: we arrange elements of the set around a circle. However, in the infinite case we cannot use the immediate successor relation; instead we use a ternary relation denoting that elements a, b, c occur after each other (not necessarily immediately) as we go around the circle.

The general definition is as follows: a cyclic order on a set X is a relation C ⊂ X3, written [a, b, c], that satisfies the following axioms:[nb]

The axioms are named by analogy with the asymmetry, transitivity, and totality axioms for a binary relation, which together define a strict linear order. Edward Huntington (1916, 1924) considered other possible lists of axioms, including one list meant to emphasize the similarity between a cyclic order and a betweenness relation. A ternary relation that satisfies the first three axioms, but not necessarily the axiom of totality, is a partial cyclic order.

Given a linear order < on a set X, the cyclic order on X induced by < is defined as follows:[2]

Two linear orders induce the same cyclic order if they can be transformed into each other by a cyclic rearrangement, as in cutting a deck of cards.[3] One may define a cyclic order relation as a ternary relation that is induced by a strict linear order as above.[4]

Cutting a single point out of a cyclic order leaves a linear order behind. More precisely, given a cyclically ordered set (K, [ ]), each element a ∈ K defines a natural linear order <a on the remainer of the set, K ∖ a, by the following rule:[5]

Given two elements a ≠ b ∈ K, the open interval from a to b, written (a, b), is the set of all x ∈ K such that [a, x, b]. The system of open intervals completely defines the cyclic order and can be used as an alternate definition of a cyclic order relation.[7]

An interval (a, b) has a natural linear order given by <a. One can define half-closed and closed intervals [a, b), (a, b], and [a, b] by adjoining a as a least element and/or b as a greatest element.[8] As a special case, the open interval (a, a) is defined as the cut K ∖ a.

More generally, a proper subset S of K is called convex if it contains an interval between every pair of points: for a ≠ b ∈ S, either (a, b) or (b, a) must also be in S.[9] A convex set is linearly ordered by the cut <x for any x not in the set; this ordering is independent of the choice of x.

The "cyclic order = arranging in a circle" idea works because any subset of a cycle is itself a cycle. In order to use this idea to impose cyclic orders on sets that are not actually subsets of the unit circle in the plane, it is necessary to consider functions between sets.

A function is called an embedding if it is both monotone and injective.[nb] Equivalently, an embedding is a function that pushes forward the ordering on X: whenever [a, b, c], one has [f(a), f(b), f(c)]. As an important example, if X is a subset of a cyclically ordered set Y, and X is given its natural ordering, then the inclusion map i : X → Y is an embedding.

Generally, an injective function f from an unordered set X to a cycle Y induces a unique cyclic order on X that makes f an embedding.

A cyclic order on a finite set X can be determined by an injection into the unit circle, X → S1. There are many possible functions that induce the same cyclic order—in fact, infinitely many. In order to quantify this redundancy, it takes a more complex combinatorial object than a simple number. Examining the configuration space of all such maps leads to the definition of an (n − 1)-dimensional polytope known as a cyclohedron. Cyclohedra were first applied to the study of knot invariants;[10] they have more recently been applied to the experimental detection of periodically expressed genes in the study of biological clocks.[11]

The category of homomorphisms of the standard finite cycles is called the cyclic category; it may be used to consrtuct Alain Connes' cyclic homology.

One may define a degree of a function between cycles, analogous to the degree of a continuous mapping. For example, the natural map from the circle of fifths to the chromatic circle is a map of degree 7. One may also define a rotation number. 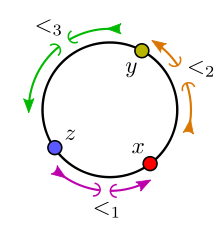 A certain subset of this cycle of cuts is the Dedekind completion of the original cycle.

Starting from a cyclically ordered set K, one may form a linear order by unrolling it along an infinite line. This captures the intuitive notion of keeping track of how many times one goes around the circle. Formally, one defines a linear order on the Cartesian product Z × K, where Z is the set of integers, by fixing an element a and requiring that for all i:[17]

This ordering of Z × K is called the universal cover of K.[nb] Its order type is independent of the choice of a, but the notation is not, since the integer coordinate "rolls over" at a. For example, although the cyclic order of pitch classes is compatible with the A-to-G alphabetical order, C is chosen to be the first note in each octave, so in note-octave notation, B3 is followed by C4.

There are also n-fold coverings for finite n; in this case, one cyclically ordered set covers another cyclically ordered set. For example, the 24-hour clock is a double cover of the 12-hour clock. In geometry, the pencil of rays emanating from a point in the oriented plane is a double cover of the pencil of unoriented lines passing through the same point.[18] These covering maps can be characterized by lifting them to the universal cover.[7] 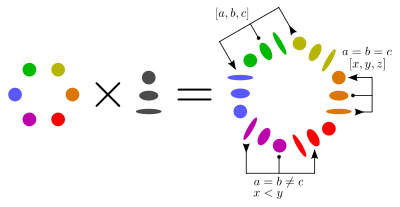 The lexicographic product K × L globally looks like K and locally looks like L; it can be thought of as K copies of L. This construction is sometimes used to characterize cyclically ordered groups.[20]

One can also glue together different linearly ordered sets to form a circularly ordered set. For example, given two linearly ordered sets L1 and L2, one may form a circle by joining them together at positive and negative infinity. A circular order on the disjoint union L1 ∪ L2 ∪ {–∞, ∞} is defined by ∞ < L1 < –∞ < L2 < ∞, where the induced ordering on L1 is the opposite of its original ordering. For example, the set of all longitudes is circularly ordered by joining together all points west and all points east, along with the prime meridian and the 180th meridian. Kuhlmann, Marshall & Osiak (2011) use this construction while characterizing the spaces of orderings and real places of double formal Laurent series over a real closed field.[21]

The open intervals form a base for a natural topology, the cyclic order topology. The open sets in this topology are exactly those sets which are open in every compatible linear order.[22] To illustrate the difference, in the set [0, 1), the subset [0, 1/2) is a neighborhood of 0 in the linear order but not in the cyclic order.

The interval topology forgets the original orientation of the cyclic order. This orientation can be restored by enriching the intervals with their induced linear orders; then one has a set covered with an atlas of linear orders that are compatible where they overlap. In other words, a cyclically ordered set can be thought of as a locally linearly ordered space: an object like a manifold, but with order relations instead of coordinate charts. This viewpoint makes it easier to be precise about such concepts as covering maps. The generalization to a locally partially ordered space is studied in Roll (1993); see also Directed topology.

A cyclically ordered group is a set with both a group structure and a cyclic order, such that left and right multiplication both preserve the cyclic order.

A cyclic order is required to be symmetric under cyclic permutation, [a, b, c] ⇒ [b, c, a], and asymmetric under reversal: [a, b, c] ⇒ ¬[c, b, a]. A ternary relation that is asymmetric under cyclic permutation and symmetric under reversal, together with appropriate versions of the transitivity and totality axioms, is called a betweenness relation. A separation relation is a quaternary relation that can be thought of as a cyclic order without an orientation. The relationship between a circular order and a separation relation is analogous to the relationship between a linear order and a betweenness relation.[27]

Evans, Macpherson & Ivanov (1997) provide a model-theoretic description of the covering maps of cycles.

Hans Freudenthal has emphasized the role of cyclic orders in cognitive development, as a contrast to Jean Piaget who addresses only linear orders. Some experiments have been performed to investigate the mental representations of cyclically ordered sets, such as the months of the year.