On 18 February 1882, fifteen months after the founding of the Irish FA, Ireland made their international debut against England, losing 13–0 in a friendly played at Bloomfield in Belfast. This remains the record defeat for the team, and also England's largest winning margin. On 25 February 1882, Ireland played their second international, against Wales at the Racecourse Ground, Wrexham, and an equaliser from Johnston became Ireland’s first ever goal.

In 1899 the Irish FA also changed its rules governing the selection of non-resident players. Before then the Ireland team selected its players exclusively from the Irish League, in particular the three Belfast-based clubs Linfield, Cliftonville and Distillery. On 4 March 1899 for the game against Wales, McAteer included four Irish players based in England. The change in policy produced dividends as Ireland won 1–0. Three weeks later, on 25 March one of these four players, Archie Goodall, aged 34 years and 279 days, became the oldest player to score in international football during the 19th century when he scored Ireland’s goal in a 9–1 defeat to Scotland.

In 1920 Ireland was partitioned into Northern Ireland and Southern Ireland. In 1922, Southern Ireland gained independence as the Irish Free State, later to become a republic under the name of Ireland. Amid these political upheavals, a rival football association, the Football Association of Ireland, emerged in Dublin in 1921 and organised a separate league and international team. In 1923, at a time when the home nations had withdrawn from FIFA, the FAI was recognised by FIFA as the governing body of the Irish Free State on the condition that it changed its name to the Football Association of the Irish Free State. The Irish FA continued to organise its national team on an all-Ireland basis.

Between 1928 and 1946 the IFA were not affiliated to FIFA and the two Ireland teams co-existed, never competing in the same competition. However, on 8 March 1950, in 0–0 draw with Wales at the Racecourse Ground, Wrexham in a World Cup qualifier, the IFA fielded a team that included four players who were born in the Irish Free State. All four players had previously played for the FAI in their qualifiers and as a result had played for two different associations in the same FIFA World Cup tournament.

After complaints from the FAI, FIFA intervened and restricted players' eligibility based on the political border. In 1953 FIFA ruled neither team could be referred to as Ireland, decreeing that the FAI team be officially designated as the Republic of Ireland, while the IFA team was to become Northern Ireland.

Until the 1950s, the major competition for Northern Ireland/Ireland was the British Home Championship. The team had won the competition eight times, taking the title outright on three occasions. They were the last winners of the now defunct competition held in 1984, and hence still are the British champions, and the trophy remains the property of the Irish FA.

Northern Ireland also qualified for the 1982 World Cup. Gerry Armstrong was a Northern Irish football player, who played during the 1970s and 1980s. He is best remembered for scoring the goal in the 1982 World Cup that enabled Northern Ireland to beat the tournament's hosts, Spain, in a shock 1–0 win again reaching the quarter-finals after topping the first stage group, Norman Whiteside became the youngest player ever in the World Cup finals, a record that still stands. In the 1986 World Cup, they reached the first round. Billy Bingham, a member of the 1958 squad, was manager for both of these tournaments. They have not qualified for any other World Cups.

The side have yet to participate in their first European Championship finals. This is despite of the fact that Northern Ireland beat West Germany 1–0 both home and away in qualifiers for Euro 84; the latter was West Germany's first ever home defeat in either European Championship or World Cup qualifers. More recently, David Healy broke the record for goals scored in one Euro campaign, previously held by Davor Suker of Croatia, by scoring 13 times in Northern Ireland's attempt to qualify for Euro 2008.

The Our Wee Country mural in east Belfast commemorating Northern Ireland beating England at home in 2005.

Lawrie Sanchez was appointed in January 2004 after a run of ten games without a goal under the previous manager Sammy McIlroy, which was a world record for any international team. That run ended after his first game in charge, a 1–4 defeat to Norway in a friendly in February 2004. The run of sixteen games without a win ended after his second game, a 1–0 victory in a friendly over Estonia, with a largely experimental side, in March 2004.

On 7 September 2005, Northern Ireland beat England 1–0 in a 2006 World Cup qualifier at Windsor Park. David Healy scored the winner in the 73rd minute. Almost a year later, on 6 September 2006, Northern Ireland defeated Spain 3–2 in a qualifier for Euro 2008, with Healy scoring a hat-trick. In June 2007 Nigel Worthington was named manager in the place of Lawrie Sanchez, who took over at Fulham. Initially Worthington took over until the end of the Euro 2008 qualifiers, but was later given a contract until the end of the Euro 2012 qualifiers.

The team have also won the Home Championship 8 times, including 5 shared. 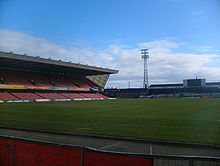 Windsor Park – a view from the Kop Stand, showing the two-tiered North Stand and the low Railway stand behind the opposite goal

Northern Ireland play their home matches at Windsor Park, Belfast, home of Linfield F.C., which they have use of on a 108 year lease, giving the owners 15% of revenue, including gate receipts and TV rights.[5]

There was a proposal to build a multisports stadium for Northern Ireland at the disused Maze prison outside Lisburn for the use of Rugby, Gaelic games and football.[6] This plan was given an "in principle" go-ahead by the Irish Football Association. However, it was opposed by fans, over 85% of whom in a match day poll conducted by the Amalgamation of Northern Ireland Supporters' Clubs ("AONISC") preferred to stay at a smaller new or redeveloped ground in the city of Belfast.[7] The AONISC organised a protest against the move to the Maze at the game against Estonia in March 2006.

The issue assumed ever greater urgency by 2007, following a series of inspections which questioned the suitability of Windsor Park to host international football.[8] Following a reduction of capacity due to the closure of the Railway Stand, the IFA made it known that they wished to terminate their contract for the use of the stadium.[9] A report on health and safety in October 2007 indicated that the South Stand might have to be closed for internationals, which would further reduce the stadium's capacity to 9,000.[10] In April 2008, Belfast City Council announced that they had commissioned Drivers Jonas to conduct a feasibility study into the building of a Sports Stadium in Belfast which could accommodate international football, which was followed at the beginning of May 2008 by speculation that the Maze Stadium project was going to be radically revised by Peter Robinson, the Finance and Personnel Minister in the Northern Ireland Assembly, so that any construction might be used for purposes other than football, rugby union and Gaelic games. Given the time that is needed to build a new stadium, in the absence of significant work improving Windsor Park, Northern Ireland may be forced to play their home games at a venue outside Northern Ireland for a period.

In March 2009, proposals were announced for the construction of a new 25,000 seat stadium in the Sydenham area of East Belfast as an alternative to the Maze proposal. This would form part of a major development, with links to both George Best Belfast City Airport and the Bangor railway line. The development would also include a hotel, and retail/leisure areas. The stadium itself would be used for both football and rugby union, with Glentoran and Ulster Rugby intended as tenants. However, Ulster GAA, who were a partner in the Maze proposal, stated that in the event of a new stadium being built in East Belfast, which is a major unionist area, their preference would then be to remain at Casement Park in nationalist West Belfast.[11]

The IFA were initially non-committal about any of the proposals for improving their facilities, be it rebuilding Windsor Park, or supporting either the Maze or Sydenham proposals. However, in September 2009, they issued an announcement in favour of the redevelopment of Windsor Park.[12] Although there were no specifics to this, Linfield had previously released a study with two proposals, of which the major one would be a £20m rebuilding of the stadium, raising capacity to 20,000.[13] In 2011, the Northern Ireland Executive allocated £138m for a major programme of stadium redevelopment throughout Northern Ireland, with £28m allocated to the redevelopment of Windsor Park into a brand new, 20,000 all-seater stadium.[14]

Steps have been taken to eradicate the sectarian element within the support.[17] Lennon has been quick to praise these initiatives, although added that because of Windsor Park's location it still "can be an intimidating place for Catholics to go. But the IFA have made huge strides."[18] He also praised the "Football For All" Outstanding Achievement Award Winner Stewart MacAfee,[19] for the work they have carried out to create a more inclusive atmosphere at international games.

Steps by the IFA to promote Football For All continue. At a friendly match in Dublin in 2011 against Scotland, the IFA carried out an inquiry following an incident in which a minority number of drunken fans sang sectarian songs.[21][22] One fan who was identified in the inquiry was said to be in line for a lifetime ban from receiving tickets to any future Northern Ireland home or away games.[23]

Northern Ireland Minister of Culture, Arts and Leisure, Carál Ní Chuilín, the first senior Sinn Féin representative to attend an international at Windsor Park, commended "the very real efforts that have been made by the IFA to tackle sectarianism at their matches" after a match in August 2011.[24]

Since the defeat of England in 2005 there has been an increased demand for tickets outstripping supply.[25] Tongue-in-cheek songs such as "We're not Brazil, we're Northern Ireland" (sung to the tune of Battle Hymn of the Republic, an American Civil War song), 'It's Just Like Watching Brazil' and 'Stand up for the Ulstermen' are popular at home matches.

One of the first footballing celebrities, and popular culture icons was former Manchester United and Northern Ireland footballer George Best. The 1968 European Footballer of the Year, Best won 37 caps and scored 9 goals for his country.[26]

The following players have been called up to the Northern Ireland squad during the last 12 months, but have not been selected in the squad to play against Italy in October 2011, or withdrew from that squad due to injury or suspension.

As of 6 September 2011, the players with the most caps for Northern Ireland are: 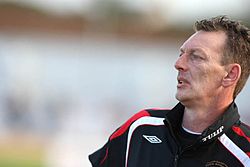 Alan McDonald, who played in the 1986 FIFA World Cup 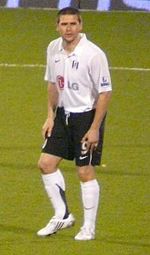