The Port Authority Police Department was created in June 1928 when 40 men were selected to police the Goethals Bridge and Outerbridge Crossing (then known as the Arthur Kill Bridge). These original officers were known as Bridgemen, nine of whom were later promoted to the rank of Bridgemaster, or Sergeant.

As the Port Authority facilities increased in number, so did its police force. With the opening of the Holland Tunnel in 1927, three Metropolitan Airports and a Marine Terminal in the 1940s, the force grew. In the 1950s the Port Authority Bus Terminal opened. The Port Authority also assumed control of the PATH system, formerly known as The Hudson and Manhattan Tubes.

The PAPD protects three major airports; Newark Liberty International Airport, John F. Kennedy International, and LaGuardia Airport, which handle over 80 million air passengers, over 1.1 million aircraft movements, and over 2.5 million tons of air cargo annually. Policing these aviation facilities involves a wide variety of duties. Police personnel cover screening points, respond to all aircraft incidents, and aid travelers from all parts of the world. Escorting and protecting visiting dignitaries is provided for on a daily basis. The PAPD also patrols the Port Authority-owned Teterboro Airport in New Jersey, which is much smaller than the other three airports and operates only general aviation aircraft.

The PAPD is also responsible for fire fighting and crash emergency rescue at the three airports and for all other aircraft emergency incidents. Police personnel assigned to fire and rescue duty are highly trained in all phases of these functions including the operation of sophisticated and complex equipment.

Police operations at Port Newark-Elizabeth Marine Terminal, Howland Hook, Port Jersey, and the Red Hook, Brooklyn piers include traffic control and the prevention and investigation of cargo thefts. PAPD officers are stationed at all ports. 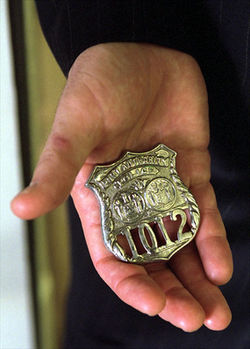 The department's headquarters is located at the Port Authority Technical Center in Jersey City, New Jersey. The nerve center of the force is the Central Police Desk, which is located at Journal Square. It is staffed around-the-clock and is the hub of the communications network. There, personnel are assigned to needed areas, all radio transmissions are monitored, and computer terminals are integrated into the NY & NJ Intelligence and Crime Information Systems as well as the National Crime Information Center (NCIC) in Washington, D.C. Information received from these sources is supplied to officers in the field when needed. Approximately 200,000 passengers use the PATH system daily. The system's stations are monitored by closed circuit T.V. to aid police personnel in their patrol.

At the Holland and Lincoln Tunnels, the Bayonne, Goethals, and George Washington Bridges, and the Outerbridge Crossing, the duties of PAPD officers are patrol, traffic control, hazardous cargo inspections, truck weigh and emergency services, as well as enforcement for violations of motor vehicle laws. Police at these crossings have also instituted programs that maintain a constant campaign against drunk driving. The Port Authority operates the largest and busiest bus terminal in the nation, accommodating 57 million bus passengers and over 2.2 million bus movements in 2001. Police assignments demand a broad range of functions, everything from locating lost children to aiding everyday commuters. They are responsible for the general security of the facility utilizing a variety of patrol tactics. Police Officer/Social Worker teams patrol the bus terminal and identify youngsters that may be runaways, throwaways, or missing persons. They provide crisis intervention counseling, placement with social service agencies, and reunions with families when appropriate. 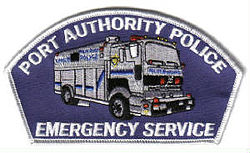 The Port Authority Police Emergency Services Unit was founded in 1983, over the objections of the Port Authority Police management at that time. Working with the non-police PATH railroad personnel and railroad management, who clearly recognized the need for a rapid response to PATH railroad emergencies and fires, a small group of Port Authority Police officers assigned to the PATH command asked for, and got, a stock Port Authority utility truck which was converted for police emergency use. Despite the continued objections of P.A. Police management, the PATH railroad management's goal of having an "Emergency Response Vehicle" operated by the police bore fruit. The initial team members were trained in underground rescue, extrication of passengers from PATH train cars and first aid, with emphasis on the procedure of lifting railroad cars from trapped persons by use of Vetter air bags. Prior to the PATH Emergency Unit, emergencies which occurred on the PATH train were handled by the local police within the jurisdictions around the PATH train (Jersey City, New York, Newark, etc.).[1]

The Port Authority Police Department formed its first K-9 unit with three patrol dogs; Prince, Bear, and Rex, and three police officer handlers in September 1985. There were two assigned to PATH and one assigned to the Port Authority Bus Terminal. They were trained by the NYC Transit Police K-9 unit located in Brooklyn N.Y. They began patrol in December 1985. The Port Authority Police Department formed its K-9 (police dog) Explosive Detection Unit in the fall of 1996 in response to the crash of TWA Flight 800 off the coast of Long Island that summer. The department subsequently expanded the unit to include a K-9 Narcotics Detection Unit. The K-9 unit, which consists of 45 police officers, three sergeants, one inspector, and 48 dogs, patrols all Port Authority facilities on a 24-hour basis. Port Authority Police officers who are members of the K-9 unit must pass a challenging and demanding physical, a physical agility course, participate in a group interview and complete a minimum of 400 hours of K-9 training. The most popular dog in the unit is the German Shepherd. The unit also has Labradors, a Belgium Shepherd and a Golden Retriever. The dogs are trained to detect either explosives or narcotics, but not both.[2] The unit currently has 40 dogs trained to detect explosives, including 22 certified by the federal Transportation Security Administration. There are eight dogs trained in narcotics detection. The K-9 explosive detection teams patrol and search aircraft, airline and cargo buildings, bus terminals, subway stations, vehicles, and unattended luggage and packages. The K-9 narcotic detection teams patrol and perform a variety of searches at Port Authority facilities and are also used by many other government agencies. This unit experienced what might be the first loss ever of an American police dog due to international terrorism when Sirius [1], PAPD Badge #17, died in the collapse of the World Trade Center on September 11, 2001.

A PAPD Motorcycle Unit RMP parked at the Outerbridge Crossing.

The Port Authority Police Department operates a motorcycle unit that consists of a sergeant and 13 police officers. The unit is responsible for patrolling Port Authority tunnels and bridges, with the primary duties of traffic enforcement, truck checks, VIP movements and funeral details. Each member of the unit is assigned his own motorcycle. Before joining the unit, each member must complete the Northwestern University/Harley Davidson Police Officer Training Program.[3]

The original motorcycle unit was disbanded back in 1956 after Police Officer James Calandra was struck and killed while on motorcycle patrol.

In June 1998, the Port Authority Police Department opened a state-of-the-art Aircraft Rescue and Firefighting Fuel Spill Trainer Facility at John F. Kennedy International Airport. The facility, one of the largest of its kind in the nation, is used to train Port Authority Police officers in aircraft rescue and firefighting techniques. It allows officers to train for emergency situations in a controlled environment. The centerpiece of the training center is a 125-foot-diameter (38 m) pit that uses clean-burning propane to simulate a fire. It also features a 75-foot (23 m)-long aircraft mockup with a broken wing section. Computer controls allow for the creation of firefighting scenarios that vary in size, difficulty and intensity.[4] Each year, more than 600 Port Authority officers are cross-trained as aircraft rescue firefighters for the region's three major airports - John F. Kennedy International, Newark Liberty International, and LaGuardia airports.[4]

After undertaking a study, the PAPD in July 2010 decided to disband its aviation unit, elimination of which will save an estimated $4 million annually in labor, fuel and maintenance costs. In addition, selling the fleet’s two Sikorsky S-76 helicopters is expected to net over $8 million.

During an eight-month review period from August 2008 through April 2009, the choppers made 258 flights, 228 of which were security patrols of Port Authority-operated airports, bridges, tunnels, and other properties. Not a single unusual incident was spotted during these patrols, according to a Wall Street Journal report. One flight was made in response to the US Airways 1549 “Miracle on the Hudson” incident, but the New York City Police Department waved off the PAPD’s assistance. Other flights were made to take aerial photos of facilities. The review also discovered that the Port Authority was the only airport operator in the U.S. to use patrol helicopters.[5]

Recruits typically receive 25 weeks of intensive training at the Port Authority Police Academy, which is located in Jersey City, NJ, with a Regional Training Center located at Kennedy Airport. Training given to recruits includes New York and New Jersey law, behavioral sciences, public relations, police practices and procedures, laws of arrest, court procedures and testimony. They are also trained in rules of evidence, defensive tactics, first aid, fire fighting, police patrol and traffic duty, firearms training, defensive and pursuit driving, water safety and rescue. Throughout their careers, Port Authority Police officers return to the Academy both for refresher courses and for training in new techniques added to the curriculum.

The Koebel Memorial Police Firearms Training Center is dedicated to the memory of Police Officer Henry J. Koebel, who was killed in the line of duty in May 1978. The Police Academy utilizes state-of-the-art equipment where the staff operates eighteen shooting ports within this computerized firearms training facility. Features include moveable target lights and noise controls, shoot/don't shoot situations, as well as standard marksmanship instruction.

There are ten sworn titles (referred to as ranks) in the Port Authority Police Department:

Promotion to the ranks of sergeant, lieutenant and captain are made via competitive civil service examinations. Promotion to detective and the higher ranks is at the discretion of the police commissioner. 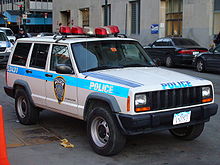 All Port Authority Police officers are equipped with a firearm, expandable baton, can of pepper spray, handcuffs, whistle, flashlight, bullet resistant vest, and a radio that is directly linked to the Central Dispatcher and other Port Authority officers. 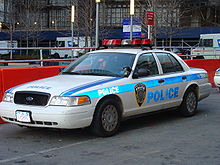 A PAPD Police Interceptor parked near the entrance to the World Trade Center construction site.

The PAPD is one of the highest paid police forces in the northeastern United States, thus making it one of the most coveted law enforcement jobs in the region.[citation needed] Under the current contract, the starting salary of police officer is $32,361, and after five years of service, the salary is $90,000,[6] not including promotions or overtime.

With such a high salary, the PAPD has attracted many officers from neighboring departments, most specifically officers from the New York City Police Department.[7]

Since the establishment of the Port Authority Police Department, 45 officers plus one police K-9 have died in the line-of-duty since 1951. 37 officers died September 11, 2001, including a K-9. 82% of the line-of-duty deaths for the entire history of the department occurred on one terrible day.[8]