Clement Clarke Moore (July 15, 1779 – July 10, 1863) was an American professor of Oriental and Greek literature at Columbia College, now Columbia University. He donated land from his family estate for the foundation of the General Theological Seminary, where he was a professor of Biblical learning and compiled a two-volume Hebrew dictionary. He is generally considered to be the author of the yuletide poem "A Visit from St. Nicholas", which later became famous as "T'was the Night Before Christmas".

He was born on July 15, 1779, to Benjamin Moore and Charity Clarke and grew up in the family residence in Elmhurst, Queens.[1] Clement Clarke Moore was a graduate of Columbia College (1798), where he earned both his B.A. and his M.A..

In 1820, Moore helped Trinity Church organize a new parish church, St. Lukes in the Fields, on Hudson Street,[2] and the following year he was made professor of Biblical learning at the General Theological Seminary in New York, a post that he held until 1850. The ground on which the seminary now stands was his gift.[3]

From 1840 to 1850, he was a board member of the New York Institution for the Blind at 34th Street and Ninth Avenue, which is now the New York Institute for Special Education. He compiled a Hebrew and English Lexicon (1809), and published a collection of poems (1844). Upon his death in 1863 at his summer residence in Newport, Rhode Island, his funeral was held in Trinity Church, Newport, where he had owned a pew. Then his body was interred in the cemetery at St. Luke in the Fields. On November 29, 1899, his body was reinterred in Trinity Churchyard Cemetery in New York.

Moore opposed the abolition of slavery, and owned several slaves during his lifetime.[4] 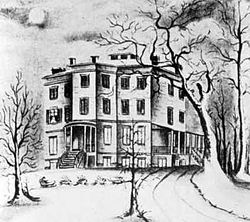 A rendering of the Mansion House of the Chelsea estate by Moore's daughter, Mary C. Ogden. made for the first color edition of A Visit from St. Nicholas (1855)

Moore's estate, Chelsea, was on the west side of Manhattan island above Houston Street, where the developed city ended at the time, and was mostly open countryside.[2] It was once the property of Maj. Thomas Clarke, Clement's maternal grandfather and a retired British veteran of the French and Indian War. Clarke named his house for a hospital in London that served war veterans. The estate was later inherited by Thomas Clarke's daughter, Charity Clarke Moore, and ultimately by grandson Clement and his family.

When New York City laid down the street grid called for in the Commissioner's Plan of 1811, the new Ninth Avenue went through the middle of the estate, causing Moore to write and publish a pamphlet which called on other "Proprietors of Real Estate" to fight the continued development of the city, which he saw as a conspiracy designed to increase political patronage and appease the city's working class. He also decried having to pay taxes for public works such as creating new streets, which he called "a tyranny no monarch in Europe would dare to exercise."[2]

Despite his protests against urban development, eventually Moore began to develop Chelsea, dividing it up into lots along Ninth Avenue and selling them to well-heeled New Yorkers. He also donated to the Episcopal diocese an apple orchard consisting of 66 tracts for use as a seminary, construction on which began in 1827. This became the General Theological Seminary, where Moore served as the first professor of Oriental Languages, and which still survives on the same site, taking up most of the block between 20th and 21st Streets and Ninth and Tenth Avenues. Ten years later, Moore also gave land on Ninth and 20th Street, east of the avenue, for St. Peter's Episcopal Church.[2] 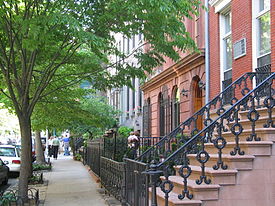 Townhouses in Chelsea; much of this Manhattan neighborhood was originally part of Moore's country estate

As a girl, Moore's mother, Charity Clarke, wrote letters to her English cousins that are preserved at Columbia University and show her disdain for the policies of the English Monarchy and her growing sense of patriotism in pre-revolutionary days.

Clement Clarke Moore's wife, Catharine Elizabeth Taylor, was of English and Dutch descent being a direct descendant of the Van Cortlandt family, once the major landholders in the lower Hudson Valley of New York.

The Moore children have several living descendants including members of the Ogden family. In 1855, one of Clement's daughters, Mary C. Moore Ogden, painted "illuminations" to go with her father's celebrated verse.

A Visit from St. Nicholas

The poem, "arguably the best-known verses ever written by an American",[5] was first published anonymously in the Troy, New York, Sentinel on December 23, 1823, and was reprinted frequently thereafter with no name attached. Moore later acknowledged authorship and the poem was included in an 1844 anthology of his works[6] at the insistence of his children, for whom he wrote it.

A Visit from St. Nicholas is largely responsible for the conception of Santa Claus from the mid-nineteenth century to today, including his physical appearance, the night of his visit, his mode of transportation, the number and names of his reindeer, and the tradition that he brings toys to children. Prior to the poem, American ideas about St. Nicholas and other Christmastide visitors varied considerably. The poem has influenced ideas about St. Nicholas and Santa Claus beyond the United States to the rest of the English-speaking world and beyond.

Moore's connection with the poem has been questioned by Professor Donald Foster, an expert on textual content analysis, who used external and internal evidence to argue that Moore could not have been the author.[7] Major Henry Livingston, Jr., a New Yorker with Dutch and Scottish roots, is considered the chief candidate for authorship, if Moore did not write it. Livingston was distantly related to Moore's wife.[7] 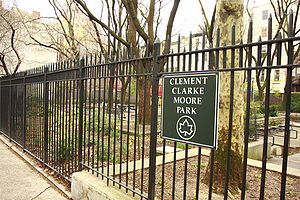 Clement Clarke Moore Park, located at 10th Avenue and 22nd Street, is named after Moore. The playground there opened November 22, 1968, and it was named in memory of Clement Clarke Moore by local law the following year. The 1995 renovations to Clement Clarke Moore Park included a new perimeter fence, modular play equipment, safety surfacing, pavements and transplanted trees. This park is a well-liked and in-demand playground area used daily by local residents, who also gather there on the last Sunday of Advent for a reading of Twas the Night Before Christmas.[8]

"A Visit from St. Nicholas"