Chen Jingrun
This is a Chinese name; the family name is Chen.

Chen was the third son in a large family from Fuzhou, Fujian, China. His father was a postal worker. Chen Jingrun graduated from the Mathematics Department of Xiamen University in 1953. His advisor at Chinese Academy of Sciences was Hua Luogeng.

His work on the twin prime conjecture, Waring's problem, Goldbach's conjecture and Legendre's conjecture led to progress in analytic number theory. In a 1966 paper he proved what is now called Chen's theorem: every sufficiently large even number can be written as the sum of a prime and a semiprime (the product of two primes) — e.g., 100 = 23 + 7·11. 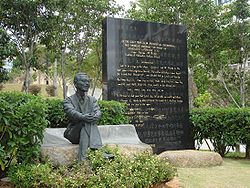 The Asteroid 7681 Chenjingrun was named after him.

In 1999, China issued an 80-cent postage stamp, titled The Best Result of Goldbach Conjecture, with a silhouette of Chen and the inequality:

Several statues in China have been built in memory of Chen. At Xiamen University, the names of Chen and four other mathematicians—Dirichlet, Jutila, Linnik, and Pan—are inscribed in the marble slab behind Chen's statue (see image).