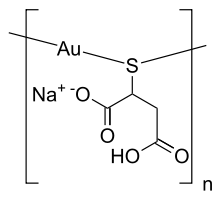 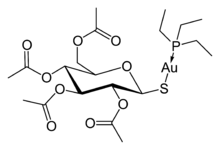 Gold salts describe ionic chemical compounds of gold. The term, which is a misnomer, has evolved into a synonym for the gold compounds used in medicine. The application of gold compounds to medicine is called "chrysotherapy" and "aurotherapy."[1] The first reports of research in this area appeared in 1935,[2] primarily to reduce inflammation and to slow disease progression in patients with rheumatoid arthritis. Most chemical compounds of gold, including some of the drugs discussed below, are not in fact salts. Gold compounds find wide use in electroplating,[3] and as reagents in organic chemistry.

Investigation of medical applications of gold salts began at the end of the 19th century, when gold cyanide demonstrated effectiveness against Mycobacterium tuberculosis.[4]

At present, gold salts are infrequently used to treat children with juvenile idiopathic arthritis (previously termed Juvenile Rheumatoid Arthritis), as methotrexate is the convention. Gold salts are sometimes used for children with progressive polyarthritis who are unresponsive to non-steroidal anti-inflammatory drugs, methotrexate, and other medications. This treatment is expensive requiring frequent visits to the doctor and numerous lab tests.

The mechanism by which gold drugs operate to treat arthritis is a matter of scientific debate. Of the various mechanisms that have been suggested for the transportation of the drugs to their sites of action in the synovium, it is thought that in the blood stream the gold attaches to albumin. The thiol groups on the gold drug being exchanged for the cysteine cysteine-34 of this protein. After arrival at the synovium, the Au(I) again undergoes a second thiol exchange reaction at cell membrane transport proteins and enters the cell via the shuttle thiol mechanism. Once absorbed into the cell, gold is proposed to be linked to anti-mitochrondrial activity and induced cell apoptosis. The myriad of side effects associated with this class of prodrugs is ascribed to the nonspecific absorption and pharmacological action, thus many cells not linked with the rheumatoid arthritis immune response are affected. Some assert that gold drugs merely inhibit the function of the various components of the immune response associated with rheumatoid arthritis, rather than acting in a disease curing fashion. It is thought that gold affects the entire immune response (phagocytes, leukocytes, T-Cells...) and reduce its potency and limit its oxidizing nature, ending the cycle of joint inflammation and erosion.

Gold drugs can be administered orally or by intramuscular injection, in which case it is administered weekly for approximately three to five months before less-frequent doses begin. Auranofin, in capsule form for oral administration, is marketed under the brand name Ridaura. Sodium aurothiomalate (Gold sodium thiomalate as brands Myocrisin UK, Aurolateor or Myochrysine U.S.) and aurothioglucose (Solganal in U.S.) are administered by injection. Regular urine tests to check for protein (indicating kidney damage) and blood tests are needed.

A 2002 paper (Richards et al.)[6] chronicles the neurological side effects of gold salts reported in the medical literature. "[T]here are reports pointing to a possible involvement of naturally-occurring gold in the nervous and glandular systems, and evidence from historical sources of a possible efficacy of gold in therapy for neurological disorders," according to the study authors. "This research has the potential for re-establishing gold as a significant therapeutic agent in a much wider range of disorders than those for which it is currently used. And it could help in sorting out valid from invalid claims of benefits from supplementation."

Side effects may develop after a significant accumulation of gold in the body. Gold compounds require up to two months to reach a steady state, and have a fairly long half life. In 10 days, only 70% is excreted, exacerbating toxicity problems.[7] The potential benefits for patients with inflammatory bowel disease, skin rash or a history of bone marrow depression should be weighed against the potential risks of gold toxicity on previously compromised organ systems or with decreased reserve. Potential problems with detection and correct attribution of toxic effects must also be considered.

Research continued to examine the potential of gold salts as anti-cancer agents. This research stemmed from the discovery that auranofin was toxic towards leukemia cells. It is also noted that a wide variety of the salts currently being researched are effective against cisplatin resistant cancer cells, highlighting their different but at present unknown modes of operation.[citation needed]