Thomas Nast (September 27, 1840 – December 7, 1902) was a German-born American caricaturist and editorial cartoonist who is considered to be the "Father of the American Cartoon".[1] He was the scourge of Boss Tweed and the Tammany Hall machine. Among his notable works were the creation of the modern version of Santa Claus, and Uncle Sam (the male personification of the American people), as well as the political symbols of both major United States political parties: the Republican elephant and the Democratic donkey.

He was born in the barracks of Landau, Germany (now in Rhine Palatinate), the son of a trombonist in the 9th regiment Bavarian band and had a half sister named Andie. The elder Nast's socialist political convictions put him at odds with the Bavarian government, and in 1846 he left Landau, enlisting first on a French man-of-war and subsequently on an American ship.[2] He sent his wife and children to New York City, and at the end of his enlistment in 1849 he joined them there. Thomas Nast's passion for drawing was apparent from an early age, and he was enrolled for about a year of study with Alfred Fredericks and Theodore Kaufmann and at the school of the National Academy of Design. Nast attended school in New York City from the age of six to fifteen, when he was forced to drop out due to financial problems. Thomas had problems adjusting to life in America and never took well to school. He spent his entire school career on the verge of flunking out and consequently was not an especially good speller. After school he started working in 1855 as a draftsman for Frank Leslie's Illustrated Newspaper; three years afterward, for Harper's Weekly. 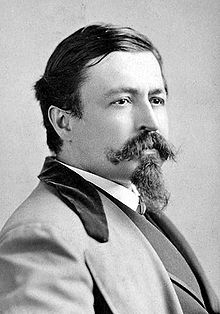 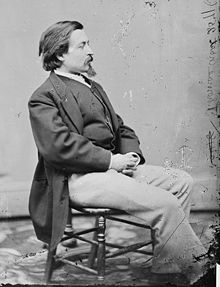 Nast drew for Harper's Weekly from 1859 to 1860 and from 1862 until 1886. In February 1860, he went to England for the New York Illustrated News to depict one of the major sporting events of the era, the prize fight between the American John C. Heenan and the English Thomas Sayers[3] sponsored by George Wilkes, publisher of Wilkes' Spirit of the Times. A few months later, as artist for The Illustrated London News, he joined Garibaldi in Italy. Nast's cartoons and articles about the Garibaldi military campaign to unify Italy captured the popular imagination in the U.S. In 1861, he married Sarah Edwards, whom he had met two years earlier.

One of his first serious works in caricature was the cartoon "Peace" (1862), directed against those in the North who opposed the prosecution of the American Civil War. This and his other cartoons during the Civil War and Reconstruction days were published in Harper's Weekly. He was known for drawing battlefields in border and southern states. These attracted great attention, and Nast was called by President Abraham Lincoln "our best recruiting sergeant".[4] Later, Nast strongly opposed President Andrew Johnson and his Reconstruction policy.

Campaign against the Tweed Ring 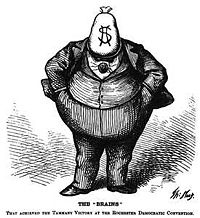 A Group of Vultures Waiting for the Storm to "Blow Over" – "Let Us Prey."
The Tweed Ring depicted by Nast in a wood engraving published in Harper's Weekly, September 23, 1871

Nast's drawings were instrumental in the downfall of Boss Tweed, the powerful Tammany Hall leader. As commissioner of public works for New York City, Tweed led a ring that by 1870 had gained total control of the city's government, and controlled "a working majority in the State Legislature".[5] Tweed and his associates—Peter Barr Sweeny (park commissioner), Richard B. Connolly (controller of public expenditures), and Mayor A. Oakey Hall—defrauded the city of many millions of dollars by grossly inflating expenses paid to contractors connected to the Ring. Nast, whose cartoons attacking Tammany corruption had appeared occasionally since 1867, intensified his focus on the four principal players in 1870 and especially in 1871.

Tweed so feared Nast's campaign that an emissary was sent to offer Thomas Nast a large bribe, which was represented as a gift from a group of wealthy benefactors to enable Nast to study art in Europe.[6] Feigning interest, Nast bid the initial offer of $100,000 up to $500,000 before declaring, "I don't think I'll do it."[7] Nast pressed his attack, and an indignant public rose against the Ring, which was removed from power in the election of November 7, 1871. Tweed was arrested in 1873 and convicted of fraud. When Tweed attempted to escape justice in December 1875 by fleeing to Cuba and from there to Spain, officials in Vigo, Spain, were able to identify the fugitive by using one of Nast's cartoons.[8]

Nast, a German Protestant, considered the Roman Catholic Church a threat to American values, and often portrayed the Irish Catholics and Catholic Church leaders in hostile terms. In 1871, one of his works, titled "The American River Ganges," portrayed Catholic bishops as crocodiles waiting to attack American school children; they wanted to have Catholic schools for Catholic children. Nast expressed his feelings about ethnic Irish in his depictions of the Irish as violent drunks. 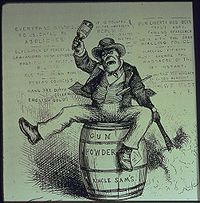 In general, his political cartoons supported American Indians and Chinese Americans. He advocated abolition of slavery, opposed segregation, and deplored the violence of the Ku Klux Klan. One of his more famous cartoons, entitled "Worse than Slavery", showed a despondent black family having their house destroyed by arson, as two members of the Ku Klux Klan and White League, paramilitary insurgent groups in the Reconstruction-era South, shake hands in their mutually destructive work against black Americans.

His cartoons frequently had numerous sidebars and panels with intricate subplots to the main cartoon. A Sunday feature could provide hours of entertainment and highlight social causes. His signature "Tammany Tiger" has been emulated by many cartoonists over the years. He introduced into American cartoons the practice of modernizing scenes from Shakespeare for a political purpose.

The Tammany Tiger Loose—"What are you going to do about it?", published in Harper's Weekly in November 1871, just before election day

Harper's Weekly, and Nast, played an important role in the election of Ulysses Grant in 1868 and 1872; in the latter campaign, Nast's ridicule of Horace Greeley's candidacy was especially merciless. Nast became a close friend of President Grant and the two families shared regular dinners until Grant's death. Nast encouraged the former president's efforts in writing his autobiography while battling cancer.

He shared political views with his friend Mark Twain and was for many years a staunch Republican. Nast opposed inflation of the currency, notably with his famous rag-baby cartoons, and he played an important part in securing Rutherford B. Hayes’ presidential election in 1876. Hayes later remarked that Nast was "the most powerful, single-handed aid [he] had",[9] but Nast quickly became disillusioned with President Hayes, whose policy of Southern pacification he opposed. He was not given free rein to attack Hayes in Harper's, however; with the death of Fletcher Harper in 1877, Nast lost an important champion at the journal, and his contributions became less frequent. He focused on oil paintings and book illustrations, but these are comparatively unimportant.[citation needed] 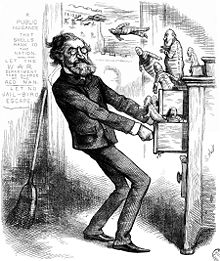 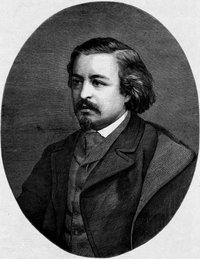 In 1884, his advocacy of civil service reform and his distrust of James G. Blaine, the Republican presidential candidate, forced him to become a Mugwump, whose support of Grover Cleveland helped him to win election as the first Democratic president since 1856. In the words of the artist's grandson, Thomas Nast St Hill, "it was generally conceded that Nast's support won Cleveland the small margin by which he was elected. In this his last national political campaign, Nast had, in fact, 'made a president.'"[10]

Nevertheless, Nast's tenure at Harper's Weekly ended with his Christmas illustration of December 1886. In the words of journalist Henry Watterson, "in quitting Harper's Weekly, Nast lost his forum: in losing him, Harper's Weekly lost its political importance."[11]

In 1890, Nast published Thomas Nast's Christmas Drawings for the Human Race. He contributed cartoons in various publications, notably the Illustrated American, but was unable to regain his earlier popularity.

In 1892, he took control of a failing magazine, the New York Gazette, and renamed it Nast's Weekly. Now returned to the Republican fold, Nast used the Weekly as a vehicle for his cartoons supporting Benjamin Harrison for president, but the magazine had little impact and ceased publication shortly after Harrison's defeat.[12]

In 1902 Theodore Roosevelt appointed him as the United States' Consul General to Guayaquil, Ecuador in South America. During a deadly yellow fever outbreak, Nast stayed to the end helping numerous diplomatic missions and businesses escape the contagion. He contracted the disease and died on December 7 of that year. His body was returned to the United States, where he was interred in the Woodlawn Cemetery in The Bronx, New York. 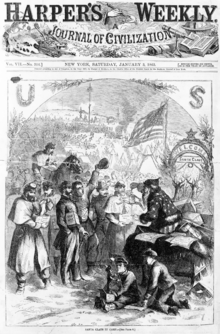 Nast's Santa Claus on the cover of the January 3, 1863, issue of Harper's Weekly.

Nast's depiction of iconic characters, such as Santa Claus and Uncle Sam, are widely credited with giving us the recognized versions we see today.

Myth of the word "nasty"

A popular myth says that the word "nasty" was based on Thomas Nast's name, due to the tone of his cartoons.[14] But, the word "nasty" has origins in Old French and Dutch hundreds of years before Nast was born.[15]