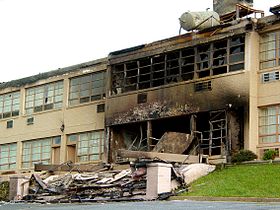 The Skyline Parkway Motel at Rockfish Gap after arson on July 9, 2004.

Arson[1] (or 'fire-raising', as it is known in Scotland) is the crime of intentionally or maliciously setting fire to structures or wildland areas.[2] It may be distinguished from other causes such as spontaneous combustion and natural wildfires. Arson often involves fires deliberately set to the property of another or to one's own property as to collect insurance compensation.[3]

Arson (or fire-raising, as it is known in Scotland)[4] is defined as "the malicious burning of the dwelling of another"[5] in common law.

malicious - for purposes of common law arson "malicious' means action creating a great risk of a burning. It is not required that the defendant acted intentionally or willfully for the purpose of burning a dwelling.
burning - at common law charring to any part of dwelling was sufficient to satisfy this element. No significant amount of damage to the dwelling was required. On the other hand mere discoloration from smoke was insufficient. Actual damage the material from which the structure was built is required.[6] Damage to surface coverings such as carpets and wallpaper is insufficient.[6] Arson was not limited to the burning of wooden structures. Any injury or damage to the structure caused by exposure to heat or flame is sufficient.
dwelling - dwelling means a place of residence.The destruction of an unoccupied building was not considered as arson, "[s]ince arson protected habitation, the burning of an unoccupied house did not constitute arson." At common law a structure did not become a residence until the first occupants had moved in and ceased to be a dwelling if the occupants abandoned the premises with no intention of resuming their residency.[7] Dwelling includes structures and outbuildings within the curtilage.[8] Dwellings were not limited to houses. A barn could be the subject of arson if it was occupied as a dwelling.
of another - burning one's own dwelling does not constitute common law arson. However, for purposes of common law arson possession or occupancy rather than title determines whose dwelling the structure is.[8] Thus a tenant who sets fire to his rented house would not be guilty of common law arson,[8] while the landlord who set fire to a rented dwelling house would be guilty.

Furthermore, "[t]he burning of one's own dwelling to collect insurance did not constitute common law arson. It was generally assumed in early England that one had the legal right to destroy his own property in any manner he chose."[9]

In the U.S., the common law elements of arson are often varied in different jurisdictions. For example, the element of "dwelling" is no longer required in most states, and arson occurs by the burning of any real property without consent or with unlawful intent.[10] Arson is prosecuted with attention to degree of severity[11] in the alleged offense. First degree arson[12] generally occurs when persons are harmed or killed in the course of the fire, while second degree arson occurs when significant destruction of property occurs.[13] While usually a felony, arson may also be prosecuted as a misdemeanor,[14] "criminal mischief", or "destruction of property."[15] Burglary also occurs, if the arson involved a "breaking and entering".[16] A person may be sentenced to death if arson occurred as a method of homicide, as was the recent case in California of Raymond Lee Oyler and in Texas of Cameron Willingham.

Some states, such as California, prosecute the lesser offense of "reckless burning" when the fire is set recklessly as opposed to willfully and maliciously.[17] The study of the causes is the subject of fire investigation.

In English law, arson was a common law offence[18] which was recently defined again and codified by the Criminal Damage Act 1971.[19]

In Scots Law, the term "willful fire raising" is the equivalent term used instead of arson, but both mean the same.