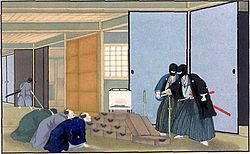 Ronin robbing a merchant's house in Japan around 1860 (1)

Robbery is the crime of taking or attempting to take something of value by force or threat of force and/or by putting the victim in fear. At common law, robbery is defined as taking the property of another, with the intent to permanently deprive the person of that property, by means of force or fear.[1] Precise definitions of the offence may vary between jurisdictions. Robbery differs from simple theft in its use of violence and intimidation.

Among the types of robbery are armed robbery involving use of a weapon and aggravated robbery involving use of a deadly weapon or something that appears to be a deadly weapon. Highway robbery or "mugging" takes place outside and in a public place such as a sidewalk, street, or parking lot. Carjacking is the act of stealing a car from a victim by force. Extortion is the threat to do something illegal, or the offer to not do something illegal, in the event that goods are not given, primarily using words instead of actions.

Criminal slang for robbery includes "blagging" (armed robbery, usually of a bank) or "stick-up" (derived from the verbal command to robbery targets to raise their hands in the air), and "steaming" (organized robbery on underground train systems).

Robbery is a statutory offence in the Republic of Ireland. It is created by section 14(1) of the Criminal Justice (Theft and Fraud Offences) Act, 2001.

Robbery is a statutory offence in England and Wales.[2] It is created by section 8(1) of the Theft Act 1968 which reads:

A person is guilty of robbery if he steals, and immediately before or at the time of doing so, and in order to do so, he uses force on any person or puts or seeks to put any person in fear of being then and there subjected to force.

Robbery is the only offence of aggravated theft.[3]

There are no offences of aggravated robbery.[4]

In R v Hale (1978)[6] the application of force and the stealing took place in different locations, and it was not possible to establish the timing; it was held that the appropriation necessary to prove theft was a continuing act, and the jury could correctly convict of robbery; this approach was followed in R v Lockley (1995)[7] when the force was applied to a shopkeeper after property had been taken. It was argued that the theft should be regarded as complete by this time, and R v Gomez (1993),[8] should apply; the court disagreed, preferring to follow R v Hale.

Actual or threatened force against a person

The threat or use of force must take place immediately before or at the time of the theft. Force used after the theft is complete will not turn the theft into a robbery.

The words "or immediately after" that appeared in section 23(1)(b) of the Larceny Act 1916 were deliberately omitted from section 8(1).[9]

It was held in R v Dawson and James (1978)[12] that "force" is an ordinary English word and its meaning should be left to the jury. This approach was confirmed in R v Clouden (1985)[13] and Corcoran v Anderton (1980),[14] both handbag-snatching cases. Stealing may involve a young child who is not aware that taking other persons' property is not in order.

The victim must be placed in apprehension or fear that force would be used immediately before or at the time of the taking of the property. A threat is not immediate if the wrongdoer threatens to use force of violence some future time.

Robbery occurs if an aggressor forcibly snatched a mobile phone or if he used a knife to make an implied threat of violence to the holder and then took the phone. The person being threatened does not need to be the owner of the property. It is not necessary that the victim was actually frightened, but the defendant must have put or sought to put the victim or some other person in fear of immediate force.[15]

The force or threat may be directed against a third party, for example a customer in a jeweller's shop.[16] Theft accompanied by a threat to damage property will not constitute robbery, but it may disclose an offence of blackmail.

Dishonestly dealing with property stolen during a robbery will constitute an offence of handling.

Robbery is an indictable-only offence.[17]

Marauders attacking a group of travellers, by Jacques Courtois

Robbery is punishable with imprisonment for life or for any shorter term.[18] It is also subject to the mandatory sentencing regime under the Criminal Justice Act 2003. On the 25 July 2006 the Sentencing Guidelines Council published Definitive Guideline on Robbery.[19]

Robbery was an offence under the common law of England. Matthew Hale provided the following definition:

Robbery is the felonious and violent taking of any money or goods from the person of another, putting him in fear, be the value thereof above or under one shilling.[21]

The common law offence of robbery was abolished for all purposes not relating to offences committed before 1 January 1969[22] by section 32(1)(a) of the Theft Act 1968.

(a) being armed with any offensive weapon or instrument, or being together with one other person or more, robs, or assaults with intent to rob, any person;
(b) robs any person and, at the time of or immediately before or immediately after such robbery, uses any personal violence to any person;

shall be guilty of felony and on conviction thereof liable to penal servitude for life, and, in addition, if a male, to be once privately whipped.

(2) Every person who robs any person shall be guilty of felony and on conviction thereof liable to penal servitude for any term not exceeding fourteen years.

(3) Every person who assaults any person with intent to rob shall be guilty of felony and on conviction thereof liable to penal servitude for any term not exceeding five years.

This section provided maximum penalties for a number of offences of robbery and aggravated robbery.[23]

The following cases relate to the use of force:

Assault with intent to rob

If a robbery is foiled before it can be completed, an alternative offence under section 8(2) of the 1968 Act is assault; any act which intentionally or recklessly causes another to fear the immediate and unlawful use of force, with an intent to rob, will suffice.

The following cases are relevant:

Mode of trial and sentence

Assault with intent to rob is an indictable-only offence.[24] It is punishable with imprisonment for life or for any shorter term.[25]

Assault with intent to rob is also subject to the mandatory sentencing regime under the Criminal Justice Act 2003.

In the United States robbery is generally treated as an aggravated form of common law larceny. The elements of robbery are:

1. a trespassory
2. taking and
3. carrying away
4. of the personal property
5. of another
6. with the intent to steal
7. from the person or presence of the victim
8. by force or threat of force.[26]

The first six elements are the same as common law larceny. It is the last two elements that aggravate the crime to common law robbery.

from the person or presence of the victim - robbery requires that the property be taken directly from the person of the victim or from his presence. Note that this is different from larceny which simply requires that property be taken from the victim’s possession, actual or constructive. Property is “on the victim's person” if the victim is actually holding the property, or the property is contained within clothing the vicitim is wearing or is attached to victim's body such as a watch or earrings.[27] Property is in a person’s presence when it is within the area of his immediate control. The property has to be close enough to the victim's person that the victim could have prevented its taking if she had not been placed in fear or intimidation.[27]

by force or threat of force - the use of force or threat of force is the defining element of robbery. For there to be robbery there must be “force or fear” in perpetrating the theft.[28] Questions concerning the degree of force necessary for robbery have been the subject of much litigation. Merely snatching the property from the victim's person is not sufficient force unless the victim resists or one of the items is attached or carried in such a way that a significant amount of force must be used to free the item from the victim's person.

For robbery the victim must be placed in “fear” of immediate harm by threat or intimidation. The threat need not be directed at the victim personally. Threats to third parties are sufficient. The threat must be one of present rather than future personal harm. Fear does not mean “fright”.[27] It means apprehension - an awareness of the danger of immediate bodily harm.

The maximum sentence for robbery in California is 25 years to life. This even applies to first time offenders with out injury or weapons involved during the robbery.[citation needed]

Robberies have been depicted, sometimes graphically, in several films. One of them is The Killing, by Stanley Kubrick. A rather unconventional view of a robbery is in Take the Money and Run, by Woody Allen. The aftermath of a robbery is shown, with abundance of lurid details, in Reservoir Dogs by Quentin Tarantino. Several robbers have become pop icons; for instance, John Dillinger or Bonnie and Clyde. Among those who have written their memoirs, the Italian Luciano Lutring; he called his book of recollections: Il solista del mitra, or The machine-gun soloist. Indeed, he worked alone (which is rather rare for a robber) and carried his machine gun in a violin case.