Looting (Hindi lūṭ, akin to Sanskrit luṭhati, [he] steals; also Latin latro, latronis "thief")—also referred to as sacking, plundering, despoiling, despoliation, and pillaging—is the indiscriminate taking of goods by force as part of a military or political victory, or during a catastrophe, such as during war,[1] natural disaster,[2] or rioting.[3] The term is also used in a broader sense, to describe egregious instances of theft and embezzlement, such as the "plundering" of private or public assets by corrupt or greedy authorities.[4] Looting is loosely distinguished from scavenging by the objects taken; scavenging implies taking of essential items such as food, water, shelter, or other material needed for survival while looting implies items of luxury or not necessary for survival such as art work, precious metals or other valuables. The proceeds of all these activities can be described as loot, plunder, or pillage. 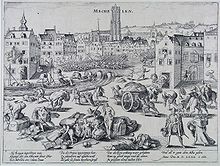 The sacking and looting of Mechelen by the Spanish troops led by the Duke of Alba, 2 October 1572.
Main article: War loot

Looting originally referred primarily to the plundering of villages and cities not only by victorious troops during warfare, but also by civilian members of the community (for example, see War and Peace,[5] which describes widespread looting by Moscow's citizens before Napoleon's troops enter the town, and looting by French troops elsewhere; also note the looting of art treasures by the Nazis during WWII[6]). Piracy is a form of looting organized by ships on the high seas outside the control of a sovereign government. The Hague Convention of 1907 and the Fourth Geneva Convention of 1949, both explicitly ban "pillage" by hostile armies. A common way to avoid this is to establish Custodian of Enemy Property, which handle the property until it can be returned.

Looting can also refer to antiquities formerly removed from countries by outsiders, such as some of the contents of Egyptian tombs which were transported to museums in Europe.[7] Other examples include the obelisks of Pharaoh Amenhotep II, in the (Oriental Museum, University of Durham, United Kingdom), Pharaoh Ptolemy IX, (Philae Obelisk, in Wimborne, Dorset, United Kingdom). Recent controversies include the major part of the architectural sculptures adorning the Parthenon, often called the "Elgin Marbles", removed by Lord Elgin, later sold to the British Museum, and claimed by Greece that they should be returned.[8]

In the aftermath of the Second World War Soviet forces had engaged in systematic plunder of Germany, including the Recovered Territories which were to be transferred to Poland, stripping it of valuable industrial equipment, infrastructure and factories and sending them to the Soviet Union.[9][10]

An FAFN soldier has been caught by French Foreign Legion troops.

During a disaster, police and military authorities are sometimes unable to prevent looting when they are overwhelmed by humanitarian or combat concerns, or cannot be summoned due to damaged communications infrastructure. Especially during natural disasters, some people find themselves forced to take what is not theirs in order to survive. How to respond to this is often a dilemma for the authorities.[11] In other cases, looting may be tolerated or even encouraged by authorities for political or other reasons. 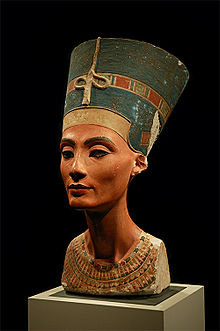 The iconic bust of Nefertiti, was illegally obtained by the Germans during the customary excavations at Tell el-Amarna in 1912.[12][13]