Date Masamune
In this Japanese name, the family name is "Date".

Date Masamune (伊達 政宗?, September 5, 1567 – June 27, 1636) was a regional strongman of Japan's Azuchi-Momoyama period through early Edo period. Heir to a long line of powerful daimyo in the Tōhoku region, he went on to found the modern-day city of Sendai. An outstanding tactician, he was made all the more iconic for his missing eye, and Date was often called dokuganryū (独眼竜), or the "one-eyed dragon".[1]

As a legendary warrior and leader, Masamune is a character in a number of Japanese period dramas. He was played by Ken Watanabe in the popular 1987 NHK series Dokuganryu Masamune. 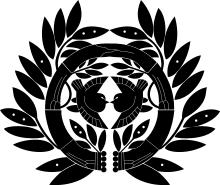 Date Masamune was the eldest son of Date Terumune, born in Yonezawa Castle (in modern Yamagata Prefecture). At the age of 14 in 1581 Masamune led his first campaign, helping his father fight the Sōma family. In 1584, at the age of 17, Masamune succeeded his father, Terumune, who chose to retire from his position as daimyo.[2] The Date family was founded in the early Kamakura period by Isa Tomomune, who originally came from the Isa district of Hitachi Province (now Ibaraki Prefecture). The family took its name from the Date district (now Fukushima Prefecture) of Mutsu Province, which had been awarded to Isa Tomomune by Minamoto no Yoritomo, the first Kamakura shogun, for his assistance in the Genpei War (1180–85) and in Minamoto no Yoritomo’s struggle for power with his brother, Minamoto no Yoshitsune. Date Masamune's army is recognized by its black armor and golden headgear.

A letter written by Masamune to Pope Paul V.

Masamune is known for a few things that made him stand out from other daimyo of the time. In particular, his famous crescent-moon-bearing helmet won him a fearsome reputation. As a child, smallpox robbed him of sight in his right eye, though it is unclear exactly how he lost the organ entirely.[3] Some sources say he plucked out the eye himself when a senior member of the clan pointed out that an enemy could grab it in a fight. Others say that he had his trusted retainer Katakura Kojūrō gouge out the eye for him.[4] Because of his missing eye, his own mother condemned him as unfit to take over as clan leader and began favoring his younger brother as heir.[5]

The Date clan had built alliances with neighboring clans through marriages over previous generations. However, there were many disputes over the lands during the 15th and 16th centuries. Shortly after Masamune's succession, a Date retainer named Ōuchi Sadatsuna defected to the Ashina clan of the Aizu region. Masamune declared war on the Ashina for this betrayal, but his army was halted by the Ashina general Iwashiro Morikuni, who forced Masamune to retire from the campaign. Masamune took control of Obama Castle after this.

With the rise of Masamune, formerly amicable relationships were cast aside as he began to attack and conquer all of the surrounding lands, even those of his kin in Mutsu and Dewa Provinces. Shocked by his ruthlessness, a neighboring family, the Hatakeyama, desperately appealed to Date Terumune to rein in his son's military campaigns. Invited to dinner by the Hatakeyama, Terumune said that he was unable to control his son. In an unheard-of act of desperation, the family kidnapped Terumune and attempted to take him back with them. Masamune, who was out hunting, received word of the kidnapping. When he and his men closed in on the kidnappers as they were about to cross a river, Terumune ordered his son's men to kill all the enemy, even at the cost of his own life. Masamune's men did as they were told and killed everyone, including Terumune.[2] Masamune continued the war and tortured and killed the families of his father's kidnappers.

After defeating the Ashina in 1589, he made the Aizu domain his base of operations.

Meanwhile, his relationship with his mother, Yoshihime, continued to deteriorate. Yoshihime insisted Masamune resign the succession to her second son, Kojiro. According to some historians, she tried to poison him one night while serving him dinner. Masamune consequently killed his own brother in order to come to power.[6] After this tragedy, his mother fled to her brother's home, the Mogami clan.[7]

In 1590, Toyotomi Hideyoshi seized Odawara Castle and compelled the Tōhoku region daimyos to participate in the campaign. Although Masamune refused Hideyoshi's demands at first, he had no real choice in the matter since Hideyoshi was the virtual ruler of Japan. Masamune still delayed, infuriating Hideyoshi. Expecting to be executed, Masamune, wearing his finest clothes and showing no fear, faced his angry overlord. Not wanting further trouble, Hideyoshi spared his life, saying that "He could be of some use".

After serving Hideyoshi for a time, he was given Iwatesawa castle and the surrounding lands as his home domain. Masamune moved there in 1591, rebuilt the castle, renamed it Iwadeyama, and encouraged the growth of a town at its base. Masamune stayed at Iwadeyama for 13 years and turned the region into a major political and economic center. He and his men served with distinction in the Korean invasions under Hideyoshi and, after Hideyoshi's death, he began to support Tokugawa Ieyasu — apparently at the advice of Katakura Kojūrō.

Tokugawa Ieyasu awarded Masamune the lordship of the huge and profitable Sendai Domain, which made Masamune one of Japan’s most powerful daimyo. Tokugawa had promised Masamune a one million koku domain, but, even after substantial improvements were made, the land only produced 640,000 koku, most of which was used to feed the Edo region. In 1604, Masamune, accompanied by 52,000 vassals and their families, moved to what was then the small fishing village of Sendai. He left his fourth son, Date Muneyasu, to rule Iwadeyama. Masamune would turn Sendai into a large and prosperous city.

Although Masamune was a patron of the arts and sympathized with foreign causes, he was also an aggressive and ambitious daimyo. When he first took over the Date clan, he suffered a few major defeats from powerful and influential clans such as the Ashina. These defeats were arguably caused by recklessness on Masamune's part.

Being a major power in northern Japan, Masamune was naturally viewed with suspicion, as any potential rival would be viewed. Toyotomi Hideyoshi reduced the size of his land holdings after his tardiness in coming to the Siege of Odawara against Hōjō Ujimasa. Later in his life, Tokugawa Ieyasu increased the size of his lands again, but was constantly suspicious of Masamune and his policies. He was particularly suspicious of foreign missionaries, whom he perceived as a threat to his power.

Although Tokugawa Ieyasu and other Date allies were always suspicious of him, Date Masamune for the most part served the Tokugawa and Toyotomi loyally. He took part in Hideyoshi's campaigns in Korea, and in the Osaka campaigns. When Tokugawa Ieyasu was on his deathbed, Masamune visited him and read him a piece of Zen poetry. Masamune was highly respected for his ethics; a still-quoted aphorism is, "Rectitude carried to excess hardens into stiffness; benevolence indulged beyond measure sinks into weakness."

Patron of culture and Christianity

Masamune expanded trade in the otherwise remote, backwater Tōhoku region. Although initially faced with attacks by hostile clans, he managed to overcome them after a few defeats and eventually ruled one of the largest fiefdoms of the later Tokugawa shogunate. He built many palaces and worked on many projects to beautify the region. He is also known to have encouraged foreigners to come to his land. It is unlikely that Masamune himself was secretly a Christian convert. Even though he funded and promoted an envoy to establish relations with the Pope in Rome, he was likely motivated at least in part by a desire for foreign technology, similar to that of other lords, such as Oda Nobunaga. Further, once Tokugawa Ieyasu outlawed Christianity, Masamune reversed his position, and though disliking it, let Ieyasu persecute Christians in his domain. For 270 years, Tōhoku remained a place of tourism, trade and prosperity. Matsushima, for instance, a series of tiny islands, was praised for its beauty and serenity by the wandering haiku poet Matsuo Bashō.

He showed sympathy for Christian missionaries and traders in Japan. In addition to allowing them to come and preach in his province, he also released the prisoner and missionary Padre Sotelo from the hands of Tokugawa Ieyasu. Date Masamune allowed Sotelo as well as other missionaries to practice their religion and win converts in Tōhoku. 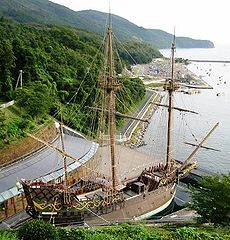 Replica of the galleon Date Maru, or San Juan Bautista, in Ishinomaki, Japan.

Masamune's greatest achievement was funding and backing one of Japan's few journeys of far-flung diplomacy and exploration in this period. He ordered the building of the exploration ship Date Maru or San Juan Bautista, using foreign (European) ship-building techniques. He sent one of his retainers, Hasekura Tsunenaga, Sotelo, and an embassy numbering 180 on a successful voyage to establish relations with the Pope in Rome. This expedition visited such places as the Philippines, Mexico, Spain and Rome, making it the first Japanese voyage to sail around the world. Previously, Japanese lords had never funded this sort of venture, so it was probably the first successful voyage.[8] At least five members of the expedition stayed in Coria (Seville) of Spain to avoid the persecution of Christians in Japan. 600 of their descendants, with the surname Japón (Japan), are now living in Spain.

When the Tokugawa government banned Christianity, Masamune had to obey the law. However, some sources suggest that Masamune's eldest daughter, Iroha, was a Christian.[9]

See People of the Sengoku period in popular culture.