Pronunciation (help·info)) is a generic term referring to the powerful territorial lords[1] in pre-modern Japan who ruled most of the country from their vast, hereditary land holdings. In the term, "dai" (大?) literally means "large", and "myō" stands for myōden (名田?), meaning private land.[2]

Subordinate only to the shogun, daimyo were the most powerful feudal rulers from the 10th century to the middle 19th century in Japan.

From the shugo of the Muromachi period through the Sengoku to the daimyo of the Edo period, the rank had a long and varied history.

The term "daimyo" is also sometimes used to refer to the leading figures of such clans, also called "lord". It was usually, though not exclusively, from these warlords that a shogun arose or a regent was chosen. 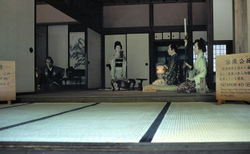 Daimyo Matsudaira Katamori visits the residence of a retainer. Mannequins in building in Aizuwakamatsu.

Major shugo daimyo came from the Shiba, Hatakeyama, and Hosokawa clans, as well as the tozama clans of Yamana, Ōuchi, and Akamatsu.The greatest ruled multiple provinces.

The Ōnin War was a major uprising in which shugo daimyo fought each other. During this and other wars of the time, kuni ikki, or provincial uprisings, took place as locally powerful warriors sought independence from the shugo daimyo. The deputies of the shugo daimyo, living in the provinces, seized the opportunity to strengthen their position. At the end of the fifteenth century, those shugo daimyo who succeeded remained in power. Those who had failed to exert control over their deputies fell from power and were replaced by a new class, the "sengoku daimyo", who arose from the ranks of the shugodai and Ji-samurai. 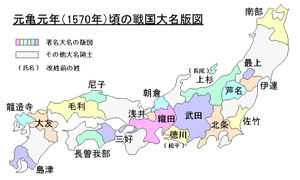 Among the sengoku daimyo (戦国大名, sengoku daimyō?) were many who had been shugo daimyo, such as the Satake, Imagawa, Takeda, Toki, Rokkaku, Ōuchi, and Shimazu. New to the ranks of daimyo were the Asakura, Amago, Nagao, Miyoshi, Chōsokabe, Jimbō, Hatano, Oda, and Matsunaga. These came from the ranks of the shugodai and their deputies. Additional sengoku daimyo such as the Mōri, Tamura, and Ryūzōji arose from the ji-samurai. The lower officials of the shogunate and ronin (Late Hōjō, Saitō), provincial officials (Kitabatake), and kuge (Tosa Ichijō) also gave rise to sengoku daimyo.[citation needed]

Daimyo in the Edo period

After the Battle of Sekigahara in the year 1600 that marked the beginning of the Edo period, shogun Tokugawa Ieyasu reorganized roughly 200 daimyo and their territories, into the han, and rated them based on their production of rice from rice paddies. Daimyo were those who headed han assessed at 10,000 koku (50,000 bushels) or more. Ieyasu also categorized the daimyo according to how close they were to the ruling Tokugawa family: the shinpan were related to the Tokugawa; the fudai had been vassals of the Tokugawa or allies in battle; and the tozama who had not allied with the Tokugawa before the battle (did not necessarily fight against the Tokugawa).

Around 1800, there were approximately 170 daimyo in Japan.[citation needed] 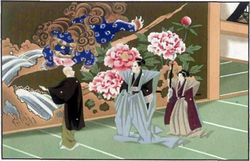 A Daimyo paying a state visit, illustration from ca. 1860

The shinpan were collaterals of Ieyasu, such as the Matsudaira, or descendants of Ieyasu other than in the main line of succession. Several shinpan, including the Tokugawa of Owari (Nagoya), Kii (Wakayama) and Mito, as well as the Matsudaira of Fukui and Aizu, held large han.

A few fudai daimyo, such as the Ii of Hikone, held large han, but many were small. The shogunate placed many fudai at strategic locations to guard the trade routes and the approaches to Edo. Also, many fudai daimyo took positions in the Edo shogunate, some rising to the position of rōjū. The fact that fudai daimyo could hold government positions while tozama, in general, could not was a main difference between the two.

Tozama daimyo held large fiefs, with the Kaga han of Ishikawa Prefecture, headed by the Maeda clan, assessed at 1,000,000 koku. Other famous tozama clans included the Mori of Chōshū, the Shimazu of Satsuma, the Date of Sendai, the Uesugi of Yonezawa, and the Hachisuka of Awa. Initially, the Tokugawa regarded them as potentially rebellious, but for most of the Edo period, marriages between the Tokugawa and the tozama, as well as control policies such as sankin kōtai, resulted in peaceful relations.

Sankin kōtai ("alternate attendance") was the system whereby the Tokugawa forced all daimyo to spend every other year at the Tokugawa court in Edo, and maintain their family members in Edo when they returned to their han. This increased political and fiscal control over the daimyo by Edo. As time went on in the Tokugawa period, many other systems of controlling the daimyo were put into place, such as mandatory contributions to public works such as road building. In addition, daimyo were forbidden to build ships and castles, and other shows of military power were often tightly controlled.

Upset by these controls, and often in bad economic situations because of things like sankin kotai, forced support of public works, and extravagant spending, several daimyo sided against the Tokugawa Shogunate during the Meiji Restoration.

After the Meiji Restoration

In 1869, the year after the Meiji Restoration, the daimyo, together with the kuge, formed a new aristocracy, the kazoku. In 1871, the han were abolished and prefectures were established, thus effectively ending the daimyo era in Japan. In the wake of this change, many daimyo remained in control of their lands, being appointed as prefectural governors; however, they were soon relieved of this duty and called en masse to Tokyo, thereby cutting off any independent base of power from which to potentially rebel. Despite this, members of former daimyo families remained prominent in government and society, and in some cases continue to remain prominent to the present day. (For example, Morihiro Hosokawa, the former prime minister is a descendant of the daimyo of Kumamoto, but these cases are very few now.)