University of Ontario Institute of Technology

University of Ontario Institute of Technology

The University of Ontario Institute of Technology (UOIT) is located in Oshawa, Ontario, Canada. The university shares its campus with Durham College. The university was founded in 2002 and accepted its first students in 2003, making it one of Canada's newest universities. The enabling legislation is the University of Ontario Institute of Technology Act, 2002. [3] All undergraduate programs require students to lease a Lenovo Thinkpad laptop PC from the university as a condition of enrollment, making it Ontario's only laptop-based university. Faculty members also encourage students to use their laptops to complete assignments, perform laboratory research and interact with faculty during lectures. UOIT offers a range of undergraduate programs, and graduate programs in Science, Engineering, Health and Information Technology. The UOIT campus is approximately 400 acres (160 ha) in the northern part of Oshawa.

UOIT was founded in 2002 by the University of Ontario Institute of Technology Act, 2002 passage by the Legislative Assembly of Ontario of Bill 109 on June 27, 2002. It is a public, career-focused university emphasizing science and technology, and a part of the Ontario government’s initiative to create more spaces in postsecondary institutions for the double cohort. UOIT's new slogan, "Challenge, Innovate, Connect" was unveiled in June 2006. 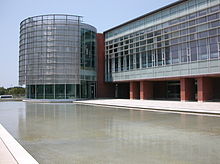 Construction on the university's first buildings began in 2002. The facilities currently include a library shared with Durham College, the Science Building, and the Business and IT Building as well as a state of the art virtual hospital for nursing students. The Ontario Power Generation Engineering Building opened in September 2006. The residences for UOIT are Simcoe Village and South Village. The Automotive Centre of Excellence (ACE) is connected to the Ontario Power Generation Engineering Building (opened in 2011). ACE is a multi-level testing and research centre that will allow for full climatic, durability and lifecycle testing. It has a full range of testing facilities including a five story high climatic wind tunnel.

Plans have been announced for the Centre for Cybercrime Research which will be a separate, permanent location on campus and will be dedicated to leading-edge research and the training of graduate and undergraduate students in various aspects of cybercrime.[7] In addition, an expansion to the athletic facilities, funded largely by students, was completed in September 2007.[8][9]

The University has established a downtown campus. It purchased and renovated the Regent Theater to be used as a lecture theatre during the week and as a community stage on the weekends. The university also renovated the former Alger Press building which opened in January 2011. UOIT has also initiated plans to renovate Victoria St. (Between King St. and Bond St.) into a pedestrian, social and lounge area. Currently the Faculty of Social Sciences and Humanities and the Faculty of Education are located downtown. The university just completed a comprehensive master plan for the downtown campus location entitled "Into the Future: A Framework & Action Plan for Growing UOIT & Downtown Oshawa. It will guide university growth over the next years and decades. The study anticipates the relocation of the Faculty of Business and Information Technology from the north campus location to the downtown campus location by 2015.

Faculty members are involved in research in a variety of areas. These include:

In the last week of September 2007, the Durham Regional Police Service entered the homes of university and college students living off campus in search of leasing agreements. The city of Oshawa obtained 17 warrants to search these homes, police and bylaw officers picking the locks and arriving unannounced. This all took place under the suspicion that the residences were illegal boarding houses.[11][12]

As well the City of Oshawa introduced a new bylaw on February 18, 2008 limiting the number of bedrooms in a rental home to four and forcing landlords to pay a $1,000 fee, driving up the cost of affordable housing for students. The bylaw did not take into account landlords who live on the property, and only pertained to the areas directly surrounding the school. As well families renting to students were exempt from the bylaw.[13]

These actions have been seen by the student community as outright discrimination. In an open letter to the Toronto Star, Barbara Hall, chief of the Ontario Human Rights Commission, stated "I urge Oshawa City Council members to look closely at what has been proposed, to apply a sound city-wide planning rationale, and to consider the human rights impact of its decision." Many students have seen this as encouragement to file human rights complaints against the city for age discrimination.[14]

Some local residents however, are still unhappy with the growing student population and have also begun protesting of a planned student housing apartment. Accusing the new construction of cramming too many students in too small an area.[15][16]

The University of Ontario Institute of Technology has built a new on-campus residence that houses an additional 350 students.[17]

Much debate has been made over the name choice of the school as renaming the university has been in review for more than a year. "It's quite confusing to the public because it contains the words 'university' and 'institute' and the public doesn't really understand why it's necessary to have both these words and what the differences are between those two words," says Ron Bordessa, president of the University of Ontario Institute of Technology.[18] The name also has been part of a legal dispute. Oshawa city counselor Robert Lutczyk "registered a copyright" for the "University of Ontario Institute of Technology" in 2005, and recently tried to forbid several publications from printing the name under threat of legal action.[19] A key election platform of Councillor Lutczyk's bid for mayor in 1991 was the establishment of a university in Oshawa which, at the time, was the largest city in Ontario without its own university.