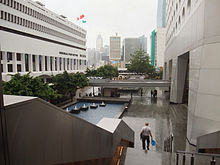 Connaught Place between the General Post Office (left) and the Jardine House on the right.

The square is home to a statue by Henry Moore entitled "Double Ova", which was unveiled in December 1977. The statue is donated by Hongkong Land and is dedicated to Vernon Roberts, former General Manager of the company.