The Coast Ranges of California constitute one of the eleven traditional geomorphic provinces of California. They include several but not all mountain ranges along the California coast (the Transverse Ranges, Peninsular Ranges and the Klamath Mountains are not included[citation needed]). Physiographically, they are a section of the larger Pacific Border province, which in turn are part of the larger Pacific Mountain System physiographic division. UNESCO has included the "California Coast Ranges Biosphere Reserve" in its Man and the Biosphere Programme of World Network of Biosphere Reserves since 1983.

The northern end of the California Coast Ranges overlap the southern end of the Klamath Mountains for approximately 80 miles on the west. They extend southward for more than 600 miles to where the coastline turns eastward along the Santa Barbara Channel, around the area of Point Conception. Here the southern end meets the Los Angeles (Transverse) Ranges, or (Sierras de los Angeles).[1] The rocks themselves that comprise the mountains are of a great variety and widely varying geologic ages. Most of the rocks were formed during the Tertiary, Cretaceous and Jurassic periods. Most were deposited on the sea bottom as sediments, but in many places also had the cracks, crevices and other gaps infused with molten lava or other masses of igneous rock, which were forced in molten condition into the sedimentary rocks. All of the range has been folded and faulted during several periods, with erosion of the softer rock giving much of the current appearance.

The California Ranges had a high production of mercury following the discovery of gold in the Sierra Nevada. In the Cache Creek Basin, cenozoic cinnabar deposits near Clear Lake are the northernmost of a group of similar deposits associated with volcanism and migration of a transform fault system. During 1877, these deposits hit their peak production of mercury, producing approximately 2,776 metric tons. These abandoned mines are still a source of mine waste runoff in Cache Creek and other downstream bodies of water.[2] 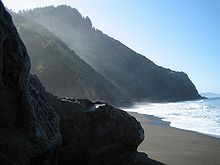 The North Coast Ranges meet the sea at the Lost Coast.

The North Coast Ranges run north-south parallel to the coast, and include the King Range of Humboldt County, where the coastal mountains meet the sea dramatically on what is called California's Lost Coast. Component ranges within the North Coast Ranges include the Mendocino Range of western Mendocino County and the Mayacamas, Sonoma, and Vaca Mountains and the Marin Hills of the North Bay. The North Coast Ranges consist of two main parallel belts of mountains, one lying along the coast, the other running further inland. They are separated by a long valley, the northern portion of which is drained by the Eel River and its tributaries, and the southern by the Russian River. A series of short rivers, including the Mattole, Gualala, and Navarro rivers, drain the western slopes of the range. The eastern slope of the North Coast Ranges drains into the California Central Valley. Clear Lake lies in the southeast portion of the range, and drains eastward via Cache Creek. The rivers of the north coast ranges are home to several species of salmon.

The drier inland portion is part of the California chaparral and woodlands ecoregion, and is home to a number of plant communities, including mixed evergreen forest, oak woodland, and chaparral. A major specific plant community of the inner ranges is Mediterranean California Lower Montane Black Oak-Conifer Forest, which supports particularly high biodiversity within the Coast Ranges.[3] California Mule Deer are the most widespread large mammal, after humans, of the Coast Ranges.

The South Coast Ranges have a Mediterranean climate, and are mostly within the California chaparral and woodlands ecoregion, although the western slope of the Santa Cruz Mountains lies within the Northern California coastal forests ecoregion. The Northern California coastal forests are characterized by forests of Coast Redwood (Sequoia sempervirens). Enclaves of redwood forest also occur in the Santa Lucia Range. The California chaparral and woodlands ecoregion has a great range of plant communities, including mixed evergreen forests, oak woodlands and savannas, grasslands, northern coastal scrublands, and the Monterey Pine (Pinus radiata) woodlands of the Monterey Peninsula and two other coastal enclaves. The highest point of the South Coast Ranges is Junipero Serra Peak, at 5,857 feet (1,785 meters), however there are many peaks in the North Coast Ranges that are significantly higher.

Some of the rarest forests that occurs in this coastal region are the Maritime Coast Range Ponderosa Pine forests, an example of which occurs in the Carbonera Creek watershed of Santa Cruz County, California.[4]