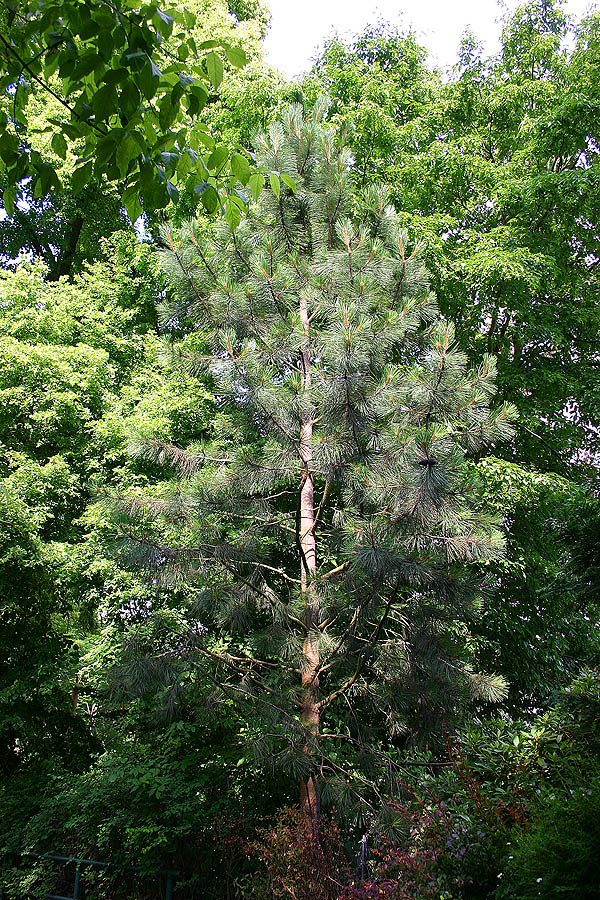 "Pinus radiata" (family Pinaceae) is known in English as Monterey Pine in some parts of the world (mainly in the , and the ), and Radiata Pine in others (primarily , ).

It is a of native to coastal in three very limited areas in Santa Cruz, Monterey and San Luis Obispo Counties, and (as the variety "Pinus radiata" var. "binata", Guadalupe Pine) on and (possibly separable as var./ssp. "cedrosensis") off the west coast of , . It is also extensively cultivated in many other warm temperate parts of the world.

"P. radiata" grows to between 15-30 m in height in the wild, but up to 60 m in cultivation in optimum conditions, with upward pointing branches and a rounded top. The leaves ('needles') are bright green, in clusters of three (two in var. "binata"), slender, 8-15 cm long and with a blunt tip. The cones are 7-17 cm long, brown, ovoid (egg-shaped), and usually set asymmetrically on a branch, attached at an oblique angle. The is fissured and dark grey to brown.

It is closely related to and , hybridizing readily with both species; it is distinguished from the former by needles in threes (not pairs), and from both by the cones not having a sharp spine on the scales.

The forests associated with Monterey Pine are associated with other flora and fauna of note. In particular, the pine forest in was the discovery site for , an endangered species. "", a rare species of is endemic to the same pine forest adjacent to Pebble Beach. Nearby in a remnant pine forest of Pacific Grove, is a prime wintering habitat of the [http://www.pgmuseum.org/Monarchs.htm] .

In the wild, the Monterey Pine proper is seriously threatened in California by an introduced fungal disease, Pine Pitch Canker, caused by "".

On Guadalupe Island, var. "binata" is critically endangered. Most of the population was destroyed as when tens of thousands of s ate each and every seedling that germinated since the mid-19th century, the old plants dying off by and by. The population stood at one hundred in 2001-02. With the removal of goats essentially complete after 2005, hundreds of young Guadalupe Pines have started to grow up in habitat fenced after 2001, the first time this has happened in 150 years or so. Accidental introduction of Pitch Pine Canker to Guadalupe is considered the biggest threat to the population's survival at present. [Junak "et al." (2003), León de la Luz "et al." (2003)]

It is a fast-growing , adaptable to a broad range of soil types and climates, though does not tolerate temperatures below about -15°C. Its fast growth makes it ideal for forestry; in a good situation, "P. radiata" can reach its full height in 40 years or so. It was first introduced into New Zealand in the 1850s; today, over 90% of the country's plantation forests are of this species. This includes the on the central plateau of the North Island which is the largest planted forest in the world. Australia also has massive Radiata Pine plantations; so much so that many Australians are concerned by the resulting loss of native wildlife habitat. A few native animals, however, thrive on "P. radiata", notably the which, although deprived of much of its natural diet by massive habitat alteration, feeds on "P. radiata" seeds. "P. radiata" has also been introduced to the of southern Chile, where vast plantations have been planted for timber, again displacing the native forests.

In areas such as New Zealand this tree has become naturalized, and is considered an where it has escaped from plantations.