Life Is Peachy is the second studio album by the American nu metal band Korn, released on October 15, 1996 through Immortal/Epic Records. Following the success of their 1994 self-titled debut, Korn earned a second double platinum album in the United States, certified by the Recording Industry Association of America (RIAA).[2] The album charted number 3 on the Billboard 200[3] and peaked at number one in New Zealand.[4]

The album has fifteen tracks, including the hidden track after "Kill You". Korn released three singles from the album and each charted on the UK Singles Chart.[5] For the first time, Korn released covers of the songs "Lowrider" by War and "Wicked" by Ice Cube. The album features such themes as social encounters and revenge. The album cover was designed by Martin Riedl and its name is credited to Korn's bassist Reginald "Fieldy" Arvizu. It generally received mixed reviews from critics. Life Is Peachy has sold over 4 million copies worldwide.

Writing for the band's second album started immediately after touring their self titled debut. Guitarist James Shaffer the writing process as, "we didn't write nothin' for two years then we had creativity build up, like blue balls of creativity." Doug Small, author of The Story of Korn, said that "the band's songwriting method — a sort of collective building process wherein four instrumentalists, with the input of Jonathan [Davis], develop each other's ideas until they've created a monster — is truly a group effort." The album's lyrics — for the most part — were primarily written by lead singer Jonathan Davis. Drummer David Silveria told Modern Drummer, "somebody will start playing something and the rest of us will work around it and see where it goes."

After playing at a few gigs with Deftones in California, United States, Korn went back to the studio to start recording Life Is Peachy in April 1996. Korn asked Ross Robinson to produce, and wanted to begin recording at Indigo Ranch,[1] mostly because their first album had been recorded there and was a success.[6][7] The quick process was accompanied by drinking and partying. When Davis recorded, he preferred several other people be in the recording studio with him.

Jason Arnopp, author of Slipknot: Inside the Sickness, Behind the Masks, along with Doug Small, insisted the album was rushed when it was put together. Silveria explained, "We went in really fresh, and we wanted to get it done quickly to capture that moment. So it was probably about sixty percent knowing what I was going to play and forty percent just playng whatever came to mind at that moment, It ended up really good, and it has a kind of energy I probably wouldn't have gotten if I'd worked everything out beforehand." Korn's bassist Reginald "Fieldy" Arvizu said, "We wanted that same energy and inspiration we found up in the Malibu Hills."[6] 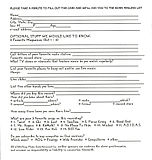 Card in Life Is Peachy

Korn's bassist Reginald "Fieldy" Arvizu came up with the title Life Is Peachy. The name came from Fieldy's Pee Chee folder. Fieldy often put "Life Is" in front of the brand name, which would humor him.[8] Fieldy said, "I used to doodle all over it [the file folder]. I drew long hair on the character and put guitars in their hands. I used to sketch stuff all the time. I eventually knew my scribbles might someday pay off. I thought that visual would make a really cool album cover."[8] Korn contacted the Pee Chee file folder company and asked for permission to use the file folder's image for an album cover, offering twenty thousand dollars ($20,000), resulting in the company turning the offer down. The name Life Is Peachy was agreed by band members to be a "great" name for the album, and kept the name but didn't add Fieldy's file folder cover.[8]

The front cover of Life Is Peachy depicts a boy looking in the mirror, seeing a much larger person behind him. The photo was taken by Martin Riedl. The design and concept were by Scott Leberacht. Other pictures in the booklet were taken by Stephen Stickler.[9] Doug Small said that it "continued the threatened child theme as depicted on Korn's artwork." The cover is mostly black and white, with a little boy, hair combed, straightening his tie in a guilt mirror; behind him looms a larger, shadowed presence." Life Is Peachy is, to date, the only album by Korn to feature their name spelled in a different font.

The booklet, along with every other album by Korn, does not feature printed lyrics to the songs. The band has explained that the reason the booklets do not feature this is because he believes fans should not rely on printed lyrics because it limits the experience in listening to the music. As Davis told MTV's Serena Altschul, "I think music is something that every individual has their own meaning to the song. They can come up with whatever the hell I'm saying and that's the beauty of it and that's what I wanna keep there."[10]

Korn began touring in the Sick of It All Tour, beginning on January 21, 1995, and ending in March 1995.[11] Following the Sick of It All Tour, Korn joined the Danzig 4 Tour, including Danzig and Marilyn Manson. The tour lasted 3 months[11] and was preceded with the group touring with Megadeth, where they played to crowds of thirty-five-hundred to five thousand.[12] They toured with Megadeth, Fear Factory, and Flotsam and Jetsam. All of this happened in the summer of 1995. Lead vocalist Jonathan Davis introduced the bagpipes while performing live (however many people there did not like this).[12] 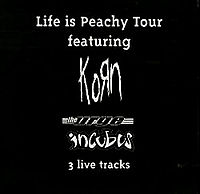 Korn began touring in Europe during September 1995. One of Korn's first concert dates was in Nottingham. After the performance, there was conflict between Korn's bassist Fieldy and someone from "tech," resulting in the airport prohibiting them from boarding the plane.[13] From 1995 to 1997, Korn toured with Ozzy Osbourne, Sugar Ray, Cradle of Thorns, Incubus, Life of Agony, Metallica, and others.[14] Korn released a promotional disc in 1997 called Life Is Peachy Tour Sampler, with Incubus and The Urge. The album featured 3 tracks, "Chi" (live) by Korn, "All Washed Up" (live) by The Urge, and "Hilikus" (live) by Incubus. The promo was released after Life Is Peachy, and lasts for twelve minutes and seventeen seconds.[15] Korn toured solo in 1997, and headlined at often sold out shows.[14] Limp Bizkit also toured with Korn to promote Life Is Peachy.[16] In 1997, Korn toured in the Lollapalooza summer tour. They toured with Tool, Snoop Dogg, Jane's Addiction, Prodigy, and others.[17]

On July 18, not even a month into the tour, the band played their final gig for Lollapalooza. Guitarist James Shaffer was diagnosed with a life-threatening illness called viral meningitis. Jonathan Davis issued a written statement about Shaffer's illness saying, "We love our fans. This is the last thing we want to do, but it's the only decision to make at this time. It just doesn't feel right without [Shaffer]."[18] The statement also acknowledged fans that "there is no suitable replacement for [Shaffer] during his recuperation."[18]

Aside from touring, Korn also released three singles following the album's release. "No Place to Hide" was the album's first single. The single features the song "Proud", a song that was previously unreleased.[19] Other versions include both original and remixed versions of songs featured on their 1994 debut album.[20] The song "A.D.I.D.A.S." was released as a single on March 4, 1997.[21] The song's music video was directed by Joseph Kahn.[8] Reginald "Fieldy" Arvizu said that "It was one of the hardest videos we ever made because we all had to lie still on cold metal slabs for hours, pretending to be dead. We wore dirty blue contacts in our eyes that made us partially blind while they were in."[8]

Life Is Peachy opens with the forty-nine second prelude "Twist". The track's vocal style is called Scat, or vocal improvisation with random vocables and nonsense syllables or without words at all. Doug Small described the singing as "spitting out the twisted rantings of a madman," and said that it was fit for the album's introduction. An a cappella version of "Twist" is included as a hidden track after "Kill You". "K@#Ø%!"'s concept was explained by bassist Reginald "Fieldy" Arvizu, "when you were a kid and you heard the f-word in a song, you'd rewind it a hundred times just to hear them say it. So we just said 'Let's put as many cuss words in one song as we could possibly do,' and I guarantee little kids that are fuckin' ten years old are freaking out about that song. They're freaking out." "A.D.I.D.A.S." is an Acronym for "All Day I Dream About Sex".

The album spans several genres, including nu metal,[22] rap metal,[23] and alternative metal.[23] Sputnikmusic said that the band takes "take the sound they established on their self titled debut and push it in a darker and, on occasion, more humorous direction." Tower Records said that the album was "full of shrilly, distorted guitar squeals, bass-heavy darkness and laryngitis-inducing growls," while considering the album to mix the genres thrash metal, hip-hop, punk rock, funk, and humor.

Q Magazine said that the album was both harsh and hard, and Stephen Thomas Erlewine of Allmusic said that the album's rhythms were "straight out of underground black metal," while also noting that it "enhanced their metallic influences." With the same band-line up as their previous album, Korn, the band created an album cosidered to be darker than their debut album. Entertainment Weekly considered the album to be of interest to "mental-health professionals." Jon Pareles stated that the album's themes characterize Korn being "Mad at Everybody, Including Themselves," and considered his feelings for Korn were mutual. iTunes said Life Is Peachy was "a barrage of throttling, detuned guitar aggression that erupts from the bottom like molten lava."

Life Is Peachy received mixed reviews from critics. Q Magazine said the album is "Harsher and harder than their groundbreaking debut."[1] Allmusic said "Korn add enough elements of alternative rock song structure to make the music accessible to the masses, and their songwriting has continued to improve."[23] iTunes commented that "Regardless of the musical textures, Life Is Peachy is unified in its focus."[27] Entertainment Weekly said that the album left the "impression that frontman Jonathan Davis is turning his well-publicized childhood traumas into a cheap marketing device". They gave it a C- and said that it "may be of interest to mental-health professionals."[25]

"No Place to Hide" earned the band a second Grammy nomination in the Best Metal Performance category in 1998. The single peaked at number twenty-six on the UK Singles Chart.[5] The albums second single, A.D.I.D.A.S. peaked number twenty-two on the UK Singles chart,[5] and also appeared on American Billboard Hot 200, as well as the ARIA Charts.[28] "Good God", the albums third and final single, peaked at number twenty on UK Singles chart,[5] as well as making it onto the ARIA Charts.[28] whole album peaked number one on the New Zealand charts.[4] The album also peaked number three on the Billboard 200,[3] and number thirty-two on the UK Albums Chart.[5] Herzebeth from Metal Storm Webzine said that Life Is Peachy is Korn's best album.[29]

All songs written and composed by Korn unless otherwise noted.

The song "Kill You" ends at around 5:02. After almost two and a half minutes of silence, there is brief reprisal of "Twist" which serves as an outro, lasting about one minute.