T-Pain is the founder of the record label Nappy Boy Entertainment, established in 2005. Throughout his career as a singer, T-Pain has extensively used the Auto-Tune pitch correction effect.

Najm was born in Tallahassee, Florida on September 30, 1985.[1] His stage name is short for "Tallahassee Pain" and was chosen because of the hardships he experienced while living there. He is a Muslim.[2] At just three years old he got his first taste of the music business. A friend of the family, gospeljazz artist/producer Ben Tankard allowed him to hang out and "twist the knobs" at his recording studio. At age ten, Najm turned his bedroom into a music studio, using a keyboard, a beat machine and a four-track recorder.[3][4]

T-Pain joined the rap group Nappy Headz in 2004 and later recorded "I'm Fucked Up", a cover version of Akon's single "Locked Up". Akon heard the song and immediately signed T-Pain to Konvict Muzik, his label. After being discovered, T-Pain began singing instead of rapping. T-Pain subsequently recorded and released his debut album, Rappa Ternt Sanga, on December 6, 2005.[1] The album reached number thirty-three on the Billboard 200, and has since been certified Gold by the RIAA, for reaching sales of 500,000 units.

In mid-2006, T-Pain began work on his second album, now with the Zomba Label Group as well as Konvict Muzik and Jive Records. The album, titled Epiphany, was released on June 5, 2007. The album sold 171,000 records in its first week, reaching number one on the Billboard 200.[5] The record has since sold 819,000 records in the United States.[6]

The album was preceded by the lead single "Buy U a Drank (Shawty Snappin')" featuring Yung Joc in February 2007. The single reached number one on both the Hot 100 and Hot R&B/Hip-Hop Songs chart, becoming his first single to top charts. The album's second single, "Bartender", featuring Akon was released in June 2007 and reached number five on the Hot 100 and number nine on the Hot R&B/Hip-Hop Songs chart. The third and final single from the album, "Church", was released in October 2007 but failed to chart in the United States.

Speaking in May 2007 to noted UK R&B writer Pete Lewis, of the award-winning Blues & Soul about his reason for naming his second album 'Epiphany', T-Pain stated: "One of the two dictionary meanings of epiphany is 'a sudden moment of insight or revelation'. And to me the title 'Epiphany' signifies the moment I realized that, to make the best music I can, I needed to just go in the studio and be myself, and not concentrate so hard on following other people's formulas."[7]

While promoting his second album, T-Pain made guest appearances on multiple songs by other artists. T-Pain was featured on "I'm a Flirt" (remix) by R. Kelly with T.I., "Outta My System" by Bow Wow, "Baby Don't Go" by Fabolous, "I'm So Hood" by DJ Khaled with many other rappers, "Shawty" by Plies, "Kiss Kiss" by Chris Brown, "Low" by Flo Rida, and "Good Life" by Kanye West.[8] In two weeks in late 2007, T-Pain was featured on four top ten singles on the Billboard Hot 100 chart[9]

"Good Life" with Kanye West later won the BET Award for Best Collaboration and was nominated in several other categories.[10][11] In 2008, the single won a Grammy Award for Best Rap Song.[12]

In 2007, T-Pain began work on his third album with Rocco Valdes, Akon and Lil Wayne. The album was also his first under his Nappy Boy Entertainment.

T-Pain at General Motors Place concert in Vancouver in January 2009.

In 2008, T-Pain continued to appear on numerous rap singles, such as "She Got It" by 2 Pistols, "Go Girl" by Ciara, "The Boss" by Rick Ross, "Cash Flow" by Ace Hood, "Shawty Get Loose" by Lil Mama, "One More Drink" by Ludacris, and "Go Hard" by DJ Khaled with Kanye West. T-Pain and Ludacris collaborated to perform "Chopped 'N' Skrewed" and "One More Drink" on American late-night television programs Jimmy Kimmel Live on ABC in November 2008 and on NBC's Saturday Night Live in the same month. T-Pain appeared again on SNL in February 2009 (on the episode hosted by Bradley Cooper with musical guest TV on the Radio) in the SNL Digital Short. T-Pain also supported the album in 2009 with his Thr33 Ringz Tour, which included sold out shows across North America. T-Pain and rapper Lil Wayne formed the duo T-Wayne in 2008.[15] The duo released a self-titled mixtape in late 2008; it charted on the Billboard 200 in January 2009.[16] Their debut album was going to be released in 2009, but never was.[17]

In May 2009, T-Pain made an appearance on a live-action episode of Aqua Teen Hunger Force as Frylock, where he made his debut as an actor.[18] He collaborated with country-pop singer Taylor Swift for the CMT Music Awards, and performed "Thug Story", a parody of Swift's hit single "Love Story".[19] In an interview with MTV, T-Pain announced that he would release his fourth studio album in November 2009 and that its title was UBER.[20] He stated that although he originally wanted to release the album in the summer of 2010, his label had pushed the release forward. Regardless of these announcements, the album wasn't released in 2009. An iPhone application called "I Am T-Pain" features an auto tuner, allowing fans to record and modify their own voice to accompany an instrumental collection of T-Pain's music. It was released in September 2009.[21] In July 2009, T-Pain endorsed the 2009 T-Pain Killa Cam-Pain, a grassroots effort to help him become elected as president of Florida State University.[22]

In November 2009, T-Pain released the first single from his fourth studio album, "Take Your Shirt Off".[23] The single only managed to reach number eighty on the Hot 100, and was later dubbed a promotional single. Later, in February 2010, he released the official lead single from his fourth studio album, "Reverse Cowgirl", featuring Young Jeezy.[24] He later release an updated version of the song excluding Young Jeezy's verse and adding a new bridge. The single reached number seventy-five on the Hot 100 and number sixty-four on the Hot R&B/Hip-Hop Songs chart, becoming a mild hit. The single has since been dubbed a promotional single. T-Pain was later featured on the "We Are the World 25 for Haiti" single in February 2010, which reached number two on the Hot 100. In the fall of 2009, T-Pain began work with Cartoon Network's Adult Swim to produce and star in a television animated musical special based on Freaknik. Freaknik: The Musical aired on March 7, 2010.[25]

In June 2010, T-Pain confirmed that his fourth studio album RevolveR has been completed and mastered, but that it will not be released until album sales increase.[26] He elaborated upon this in August 2010, stating that the album probably wouldn't be released until 2011. T-Pain's first feature film, Lottery Ticket, was released on August 20, 2010. In October 2010, T-Pain release his third promotional single, Rap Song. The song charted poorly, peaking at 89 on the Hot 100.

T-Pain released a Nappy Boy mixtape called T-Pain Presents: Nappy Boy All Stars Vol.1 which contained Nappy Boy remixes to "Every Girl", "All The Way Turnt Up" and "Forever". Later he announced a mixtape for his album rEVOLVEr called prEVOLVEr. the mixtape released three songs, the first being "Hoes & Ladies" which featured Lil Wayne and Field Mob's Smoke. The other two songs released were contest songs. The contest songs where meant for anyone willing to get on the track and who ever lays down the best verse will feature on the track and the actual album. The first contest song was called "Motivated" which was a rap song and the second song was an R&B song for the singer, called "Merry Christmas." B. Martin of Albany, NY won the competition and will be featured on the mixtape. "T-Mixes" were made, which are T-Pain's remixes to some 2010 hit songs. The released remixes were "No Hands", "Black & Yellow", "Loving You No More", "Make It Rain" and "Like a G6". Two out of the five T-Mixes were made into the official remixes. They were "Black & Yellow" by Wiz Khalifa and featured him with Snoop Dogg & Juicy J. The other T-Mix that was made into an official remix was "Loving You No More" by Dirty Money, which originally featured Drake, but the remix features T-Pain and rapper Gucci Mane.

T-Pain was featured on the first single by DJ Khaled called "Welcome To My Hood" off his new album We the Best Forever. The song featured him along with Rick Ross, Plies, & Lil Wayne. He is also expected to be featured on albums such as Drake's Take Care, Lil Wayne's Tha Carter IV, Tech N9ne's All 6s and 7s, and many more. A new toy called "iAm T-Pain Microphone" will make its way to stores everywhere in 2011, at the price of $39.99.[citation needed] T-Pain is featured on a single called Electroman which is by house artist Benny Benassi. In January, JRandall released a single, "Can't Sleep", featuring T-Pain. On March 22, 2011 the next single off RevolveR will be released titled "Best Love Song" and features American singer Chris Brown.[27] On his Twitter he stated that he would release his prEVOLVEr mixtape when he gets 500,000 followers and release his album rEVOLVEr when he gets 1,000,000 followers.[28]

On October 7, RCA Music Group announced it was disbanding Jive Records along with Arista Records and J Records. With the shutdown, T-Pain (and all other artists previously signed to these three labels) will release his future material (including RevolveЯ) on the RCA Records brand. [29][30]

On October 27, 2011 T-Pain performed at the Georgia Tech Homecoming concert.[31]

He has called his style of music "Hard & B".[32] T-Pain uses Auto-Tune, a pitch-correcting audio processor, for his vocals. Music critic Andy Kellman compared T-Pain's singing style to that of Cher in her 1998 hit "Believe", in which Cher used voice enhancements.[33] In response to Jay-Z's single "D.O.A. (Death of Auto-Tune)", T-Pain stated that he would still use the method.[20] T-Pain's use of Auto-Tune has been cited as an influence on other urban artists' works, including Snoop Dogg's single "Sexual Eruption",[34] Lil Wayne's single "Lollipop",[35] and Kanye West's album 808s & Heartbreak.[36] In November 2008, T-Pain demanded credit from other artists who used Auto-Tune.[37] 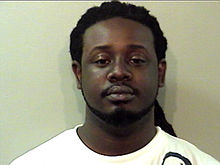 On April 28, 2007, T-Pain refused to cut his set short at Radio One's Spring Fest Concert in Miami, which caused police presence to escalate backstage. He became agitated after concert officials stopped his performance of "Buy You a Drink". Police chased him and his entourage out of the premises and detained them.[40] After a June 2007 concert of T-Pain's, Tallahassee police issued a warrant for his arrest over a suspended driver's license. He subsequently turned himself into the Leon County Jail on November 2, 2007.[41]

On March 27, 2009, T-Pain was involved in a golf cart accident, the same day he was due for a music video shoot for Lil' Kim's Download song. He suffered cuts, bruises, and four missing teeth and had emergency dental work done. He returned to performing on March 29, 2009.[42] The accident was later referenced in the music video of Glasses Malone's song "Sun Come Up" (which also featured T-Pain).