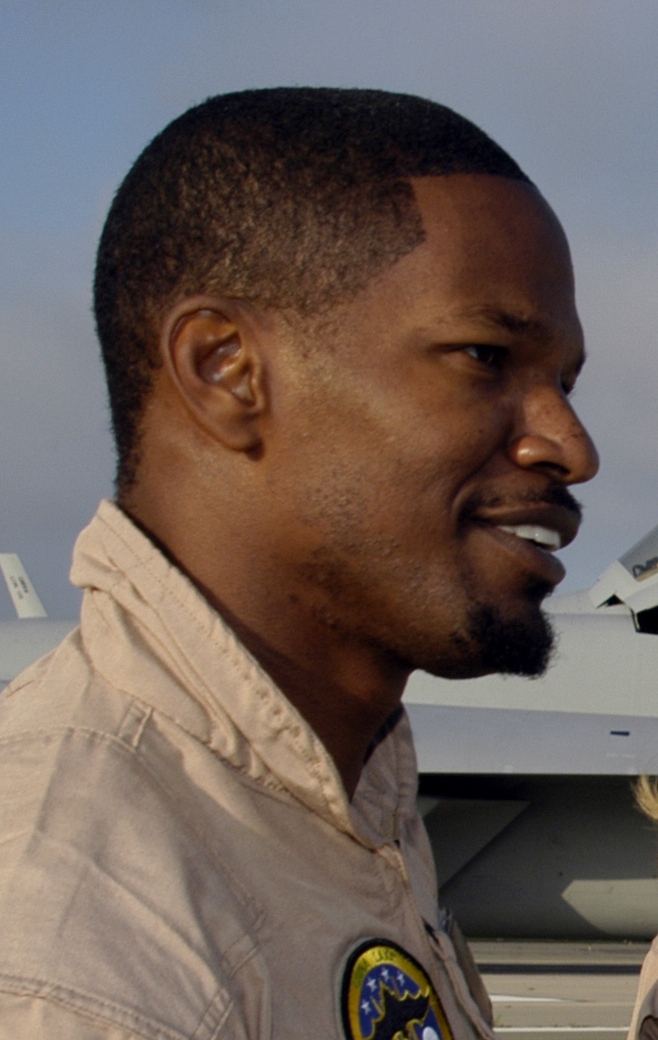 Jamie Foxx (born Eric Marlon Bishop; , ) is an -winning American , , and . Foxx is possibly best known for his portrayal of musician in "Ray". With "Ray", he became one of the few s to win the . Foxx received a star on the on .

Foxx was born in , the son of Louise Annette Talley Dixon and Darrell Bishop, who sometimes worked as a stockbroker and changed his name to Shahid Abdula after converting to .

At his grandmother's urging, Foxx began lessons at the age of five. He went on to play for church groups in Terrell, and studied in college. He also played football () at Terrell High School, and had an ambition to play for the . [Cohen, Sandy. , "Youth spent in church tickled Foxx's funny bone.". , page E16. ] He has a daughter named Corrine who was born in 1995.

Foxx started his stand up career in San Diego while attending USIU. Fellow comedian Dante, drove him to his first show at the La Jolla Comedy Store. Foxx changed his name while doing stand up comedy , when he found out that female comedians were often called first to perform. He felt Jamie Foxx was an ambiguous enough name to disallow any biases. [ [http://www.topix.net/content/cbs/2007/09/jamie-foxx-honored-with-walk-of-fame-star "Jamie Foxx Honored With Walk Of Fame Star." CBS 2 - KCAL 9.] .] His last name was chosen as a tribute to .

Foxx joined the cast of "" in 1991. Here he won over viewers with many unusual characters and impressions, which included: ugly girl Wanda; fictitious boxer Carl "The Tooth" Williams; and "The Dirty Dozens" champion T-Dog Jenkins. During this time Jamie also had a small recurring role on the live episodes of the TV series Roc, His impersonation of would eventually find him starring against the former "" cast member in his sitcom, ".

Foxx's first dramatic role came in 's 1999 film "", where he played a heavy-partying football player. He was cast in the role in part because of his background as a football player. Foxx has since evolved into a respected dramatic actor. Following "Any Given Sunday", Foxx was featured as taxi driver Max Durocher in the film "Collateral" alongside , for which he received outstanding reviews and a nomination for the . His standout performance, however, was his portrayal of in the "Ray" (2004), for which he won the .

Foxx is the second male, and the first African American, in history to receive two acting Oscar nominations in the same year for two different movies, "Collateral" and "Ray". The only other male actor to achieve this was . In 2005, Foxx was invited to join the . [ [http://www.oscars.org/press/pressreleases/2005/05.06.24.html "Academy Invites 112 to Membership".] Oscars.org. .]

Following this success, Foxx appeared in three more movies: "Jarhead", "Miami Vice", and "Dreamgirls" which were hits at the box office and lifted Foxx even higher as a bankable star in Hollywood. 2007 brought him the lead role in the film "The Kingdom", opposite Chris Cooper, and .

Foxx began piano lessons at age three, and later took classical piano lessons while attending college. In 1994, Foxx released an album (on the record label) entitled "". In 2001, he hosted the "Video Music Awards".

His music career went into a higher gear when, in 2004, he was featured on 's song, "", which also featured . The song reached number one on the US "Billboard" Hot 100 Singles chart, as well as number three on the . Foxx's second collaboration with , "", in which he sang the "I Got a Woman" -influenced hook, went straight to #1 on the "Billboard" Top 100, and remained there for 10 weeks. In 2005, Foxx was featured on the hit single "Georgia" by Atlanta rappers and . The song sampled Ray Charles' hit "". "" is Jamie Foxx's second studio release. It sold over 598,000 copies in its first week but reached the U.S. number one spot in its 2nd week.

Debuting at number two, "Unpredictable" rose to the top of the "Billboard" pop album chart, with 2nd-week sales of 200,000 copies in the United States. The album also charted in the UK top 10 album chart, peaking at number nine. It has since been certified Platinum. Foxx became the fourth artist to have won an Academy Award for acting and to have achieved a number-one record album in the US. (The other three to accomplish this feat were , , and .) Foxx's first single from the album, the title track, "Unpredictable" (featuring ) samples "WildFlower" by New Birth. The song peaked inside the top 10 of the Billboard Hot 100 and also made the UK top 20 singles chart. The second US single from the album was "DJ Play A Love Song", which reunited Foxx with . In the UK, however, the second single was "Extravaganza", which saw Foxx once again collaborate with . He was not, however, featured in the song's music video.

At the 2006 BET Awards, Foxx won two awards: Best Duet/Collaboration with for "Gold Digger" and Video of the Year for the same video. Kanye's video tied with 's (Be Without You) for Video of the year. On , Foxx received a 4 Grammy nominations:
*Best R&B Performance by a Duo or Group with Vocals for "Love Changes" feat .
*Best R&B Album for "".
*Best Rap Performance by a Duo or Group for "Georgia" by & feat Jamie Foxx.
*Best Rap/Sung Collaboration for "Unpredictable" feat .

On , Foxx was on , announcing his new "Foxxhole" channel. This channel now features comedy and music by Jamie but also music and comedy by those Jamie respects most.

Foxx recorded a song with country superstars entitled "She Goes All The Way" for their album, "".

Foxx also does background vocals for artist/songwriter .He and are featured on ' (rapper) ""

He is to feature in a remix version of "Miss Independent" by from his third album, "".

Jamie Foxx collaborated with rapper on the song "Around The World".

In April of 2003 Foxx involved in an incident with two who were attempting to escort him and his out of in . claimed they had failed to show identification upon entry. Originally charged with , , battery on police officers and , Foxx pleaded no contest to disturbing the peace in exchange for the other charges being dropped, and was sentenced to a six month suspended jail term with two years and a $1500 fine. [ [http://www.cnn.com/2003/SHOWBIZ/TV/04/26/foxx/index.html CNN.com - Police: Actor Jamie Foxx in casino brawl - Apr. 26, 2003 ] ] [ [http://www.people.com/people/article/0,,627613,00.html Casino Fight Gets Jamie Foxx Probation - Jamie Foxx : People.com ] ]