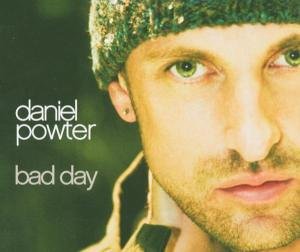 
"Bad Day" is a pop song written by Canadian singer . It was released as the first single from his debut album "Daniel Powter" (2005) and achieved a huge success throughout the world, topping the U.S. and Irish charts.

The is directed by and features two single people, a male () and a female (), waking and going about their daily schedule. The video shows this happening over a three-day period, but makes no distinction between the days. The main event is the two adding to the same wall, separately, on each day, culminating in the completion of a heart. At the end of the video, life mirrors the image created on the wall, with the boy offering the soaking wet girl a red umbrella in the pouring rain, as a cab stops for them. Parts of it are shot in a split-screen. Throughout the video, Powter is shown with his hat, playing his piano. The Metro Red Line subway in Los Angeles was used during the shooting of this video.

Listen
filename=Daniel Powter - Bad Day.ogg
title=Daniel Powter "Bad Day" (2005)
description="Bad Day" was the Billboard Hot 100 single of the year for 2006.
format="Bad Day" reached number seven on the ; it was also successful in the , where it reached number two on the after it was used in an advertising campaign for . [ [http://www.songfacts.com/detail.php?id=6092 "Bad Day by Daniel Powter Songfacts"] . . Retrieved .] In the , it reached number one on the "Billboard" Hot 100. The song grew in popularity in the United States when it was used in the fifth season of in the farewell video packages for eliminated contestants. It was also featured in the compilation album "" during the .

"Bad Day" was covered by the fictional music group for their 2007 film "Alvin and the Chipmunks". Their version made the charts in January 2008, debuting (and so far, to date) peaking at #86 on the Billboard Hot 100.