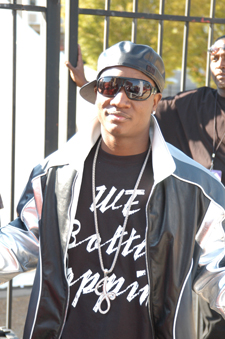 Jasiel Robinson (born ) , better known by his Yung Joc, is an American from College Park, Georgia.

Yung Joc is also featured on the songs "" by (from Diddy's "Making The Band 4") & 's album track "Call U Out". Despite the rumors, he is not related to rapper . [BET.com. [http://www.bet.com/Music/DoItYourselfYungJocAnswersYourQuestions.htm "Yung Joc answers your questions"] , retrieved ] Yung Joc is on 2006 "' Richest Rappers List", ranking at #20, with a gross worth $10 million. [ [http://rap.about.com/b/2007/08/16/jay-z-and-kanye-named-among-forbes-richest-rappers.htm Forbes' Richest Rapper's List] , retrieved ]

Yung Joc was discovered by Russell "Block" Spencer after gaining fame in Atlanta with "It's Going Down" and "I Know You See It." In 2006, Yung Joc released his debut album "". The first single, "" charted at #3 on the billboard top 100 and #1 on the Hip Hop chart. This single was produced by . His second single, "" charted at #17 on the top 100 chart. His third single, "" was less successful. This song features and the video version added . Guest appearance on the album included , , and many others. It is certified platinum, selling a million copies in the U.S.

Yung Joc was featured on other artists' singles including 's "", 's "", and 's "". Yung Joc released his second album, "", on . Guest appearances included The Game, , , , , , , and the newly recruited member of , (replacing ) . The first single from the album "" featuring Gorilla Zoe was a modest success. Joc's second single from Hustlenomics "", also features Gorilla Zoe. There was also a video released for "Gettin' to Da Money. Later a video was made for "I'm a G". Yung Joc also features on a song with Hotstylz named "Lookin Boy".

He owns two automobile-related companies, as well as a sunglasses line which will be debuting soon called Claudio St. James. Joc and his father will work together to manage the sunglasses line. Joc has been also said to have a new record label through , called Swagg Team Entertainment. This label will see the debut from Chicago group Hotstylz; their first single will be "Lookin Boy". [ [http://www.rapbasement.com/news/yung-joc/yung-joc-launches-own-record-label-plans-line-of-sunglasses.html Yung Joc Launches Own Record Label, Plans Line Of Sunglasses | Yung Joc | News ] ]

Robinson was arrested at Cleveland Hopkins International Airport at a security checkpoint as he was heading to a departing flight. Police said they found a semiautomatic handgun and 20 rounds of ammunition in his carry-on bag. He told police he did not know the weapon was there and was released on a $50,000 bond. He failed to show for an arraignment on a felony charge of carrying a concealed weapon and a warrant was issued for his arrest. Robinson later returned to Cleveland and was placed on probation in lieu of conviction.