112 (pronounced "one-twelve") is an American R&B quartet from Atlanta, Georgia. Formerly artists on Diddy's Bad Boy Records, the group signed to the Def Soul roster in 2002. They had great success in the late 1990s and early 2000s with hits such as "Only You", "Anywhere" and "Peaches & Cream". The group most notably won a Grammy in 1997 for Best Rap Performance by A Duo Or Group, for featuring in the song "I'll Be Missing You" with Puff Daddy and Faith Evans .

112 formed in Atlanta, Georgia and consists of Marvin "Slim" Scandrick - born on September 25, 1978, one of three siblings, Scandrick plays all of the concert strings, including viola, cello, double bass, and violin; Michael Marcel Keith was born on December 18, 1979 - one of three brothers, plays the keyboard; Quinnes "Q" Parker, born on March 24, 1977, is credited with the mellow vocals; and vocalist Daron Jones - who often doubles as the record producer for 112, was born on December 28, 1977, the youngest of four children. As a student he joined the middle school chorus and the Atlanta Boys Choir. Strong, smart, and athletic, he maintained a B+ average in high school while playing receiver on the varsity football team and shooting guard for the varsity basketball club. He was also seen running cross country and track, and played tennis in high school. The group had its start when the members met while attending high school. Known as "Forte" at the time, the group performed talent shows and performed at churches and schools around Atlanta, eventually gained the attention of Courtney Sills and Kevin Wales, the group's would-be managers. After being brought to the attention of Sean Combs via discovery by the production duo Tim & Bob, the group was quickly signed in front of a local club in Atlanta called "Buckhead 112 Club", which is credited to the group’s name 112. Soon afterwards they found themselves living in New York, recording their debut album 112. Released in 1996, the album eventually went double platinum. The album which was primarily produced by Tim & Bob entered into the top 5 on Billboard’s Top R&B/Hip-Hop Albums Chart, and went on to sale over two million copies. It featured the hit singles "Only You" and "Cupid", both of which peaked at #13 on the Hot 100 and #3 and #2 on the R&B charts respectively.[1] The group also contributed to records by artists including The Notorious B.I.G, Puff Daddy & Mase. The group eventually went on the road as the opening act for the Isley Brothers at Ron Isley's request, the first of four separate tours that saw the group criss-crossing the U.S. with Keith Sweat, New Edition and finally Puff Daddy and the Family, over an 18 month period. In the years that followed, they found themselves touring with other artists such as Whitney Houston and Janet Jackson.[2] 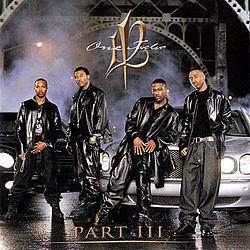 A series of hot single tracks by 112 populated the charts in 1997, beginning with "Come See Me," which hit the top 40 in January. "Cupid," Produced by Arnold Hennings, released in May, made the top 40 and was certified gold in the same month. By August the track went platinum. Another 1997 single, "I'll Be Missing You," hit the top 40 in June and was certified triple platinum by July. Attaining the number one chart position by August, the song won a Grammy Award for Best Rap Performance by a Duo or Group in 1997. "I'll Be Missing You" sat at the top of the Billboard Hot 100 for eleven weeks and spent nine weeks at the top of the Hot Singles sales. The track also topped the R&B singles, R&B singles sales, and rap singles charts for eight weeks running. The group booked tours with the Isleys, Keith Sweat, and New Edition, as well as with Puff Daddy and the Family, totaling four separate tours. The group spent 18 successive months on the road fulfilling tour commitments.

Their second album, Room 112 was released in 1998, and featured the hits, "Love Me" featuring Mase and "Anywhere" featuring Lil Zane. Both the album and the song "Love Me" were certified gold. Album sales surpassed the platinum level by May 1999, and double platinum sales were recorded in 2002.

A 2001 single, "It's Over Now", charted at the top of the Hot R&B/Hip Hop Songs. The group's third album, Part III was released in 2001, spun the hit Peaches & Cream, and earned the group their first and only Grammy nomination in the Best R&B Group or Duo category. While the group was in production on a new album for 2001, however, executive producer Combs was called to court repeatedly, regarding a shooting incident. Instead of taping at the usual accommodations in Combs's studio, 112 went to Nashville, Tennessee, to record the new disc. It was a move that signaled a pending split with Bad Boy Records. The album, Part III, was released on March 20, 2001, following an intensive barrage of advance radio publicity. Even in the absence of Combs, Part III took off with a running start. It raced up the charts to debut at number two on the Billboard 200 chart. Surpassing gold sales in April, the album went platinum in May. To promote the album further, 112 joined Janet Jackson that summer for her All for You world tour.[3] Among the singles released from the album, an upbeat track called "Peaches and Cream"—which was credited in part to Combs—scored another crossover hit for the band. Released in June, the track soared to number one on the Rhythmic Top 40 and peaked at number four on the Hot 100. The group earned two award nominations for the song that year: an MTV Best Video nomination in September, and a Grammy nomination for Best R&B Performance by a Duo or Group.[2]

In 2002 the group members, having matured both personally and professionally, came to the realisation that a split with the Bad Boy label was necessary due to the lack of interest.[4] In search of greater creative control, 112 left Bad Boy Records in February 2002 and signed with Def Jam in July on their Def Soul-imprint, insisting that the breakup was amicable. They reiterated this no-hard-feelings attitude by going to Daddy's House to record a debut album for Def Jam. Disagreements remained over ownership rights to the 112 catalog of songs, and their fourth album Hot & Wet, the Def Jam debut disc, was waylaid as a result, while negotiations ensued between Lyor Cohen of Def Jam and Bad Boy owner Combs. With both sides ultimately in agreement, Hot & Wet appeared in November 2003, with its title song breaking into Billboard 's Hot 100 and the Rhythmic Top 40 that year. In 2004 the album charted on the Billboard 200 and peaked at number four on the Top R&B/Hip-Hop Albums. The album however failed to make any noticeable impression on the charts. From the album they released "Na, Na, Na" featuring Dancehall legend Supercat.

Pleasure & Pain, the group's fifth album, was released in 2005, eventually reaching platinum status and featuring the popular single "U Already Know." The album is their first to come with a parental advisory sticker, reportedly caused by a rap from Three 6 Mafia though a few songs on the album also contain profanity. Shortly after the release of the album though and amidst rumors of issues regarding money, the members separated to pursue solo careers and were subsequently dropped by Def Jam.

In 2007, 112 formed their own label One Twelve Music Group and were in talks with a joint venture deal with Irv Gotti's The Inc. Records-imprint to release an album in 2008.[5] The group continued to tour nationally and world wide, whilst they embarked on their own solo projects. Daron Jones was reported to have left the group to pursue a solo career in 2007. However in 2008, he was seen performing with the group again while overseas in Germany and Belgium.

Slim is featured along with Three 6 Mafia on 8Ball & MJG's second single "Cruzin'" off of their album "Ridin High". He has signed his own label deal with Asylum/Atlantic called M3 Productions Inc. and released his solo debut album Love's Crazy in November 2008. He released his first single called "So Fly" featuring Yung Joc and Shawty Lo.

In an interview with MiddleChildPromotions, Q. Parker confirmed that his debut album is entitled "Real Talk" and is due for release in September 2008. He was in the studio working with Tim & Bob, The Pirates, Jammy, Bryan-Michael Cox, The Platinum Brothers and Crystal Johnson. The album will be released under a joint-venture between his own label NewFam Entertainment and Drift City Records.[6] The first single off the album is called "Crazy Crazy" and it features Rock City.

Michael Keith decided to leave 112 and go solo. He stated that a former groupmate stole his, and member Slim's, money. Causing the two to leave. Slim however states that he never fell out with anyone over money and is still with 112. The group now consists of members Q, Slim, and Daron. Mike said his business partner showed him that he wasn't receiving his royalty checks and that he needed to sue either Q or Daron. Q said that he respects Michael Keith as a man but wishes he would not put false rumors out in public. Mike says that his personal relationships with the other three members are good but business wise he can't deal with them anymore.[7] Q, Slim, and Daron have been performing without him overseas in Australia, France, and Germany. Mike released his debut solo album, Michael Keith, on September 30, 2008 as a digital download through iTunes and Amazon MP3. He also released two songs "She's My Superstar" and "Sexy" under the pseudonym "Dangerus" via the internet. In 2010, Michael Keith has reconciled with the other three members of 112 and will record with the group on their sixth studio album planned for release in 2010.

In March 2010, 112 returned to the studio, according to member Q. Parker.[citation needed] The group is recording a follow up to the 2005 album, Pleasure & Pain. He broke the news via Twitter, "In the studio with my boys Mike and Daron! New 112 album comin soon!" The news of the group's reunion was also confirmed by member Daron Jones in an interview published on Sound-Savvy.com.[8] Jones confirmed that the reunion will include Mike and Q, and possibly Slim. He commented, "Slim just didn’t want to be a part of it" But there are rumors that Slim might have had a change of heart. He recently recored a song with the group called "One More Try" it has not been confirmed if it will be on there new album or if Slim will be either.[9] The yet-to-be titled album currently doesn’t have a release date.[10][11]

In January 2011, Q Parker released a 12-month fitness calendar, and announced that his solo project will be released sometime this year.[12]

The Grammy Awards are held annually by the National Academy of Recording Arts and Sciences. 112 has one award from two nominations, so far.