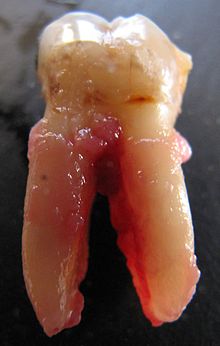 A dental extraction (also referred to as exodontia) is the removal of a tooth from the mouth. Extractions are performed for a wide variety of reasons, including tooth decay that has destroyed enough tooth structure to render the tooth non-restorable. Extractions of impacted or problematic wisdom teeth are routinely performed, as are extractions of some permanent teeth to make space for orthodontic treatment.

Historically, dental extractions have been used to treat a variety of illnesses, as well as a method of torture to obtain forced confessions. Before the discovery of antibiotics, chronic tooth infections were often linked to a variety of health problems, and therefore removal of a diseased tooth was a common treatment for various medical conditions. Instruments used for dental extractions date back several centuries. In the 14th century, Guy de Chauliac invented the dental pelican, which was used through the late 18th century. The pelican was replaced by the dental key which, in turn, was replaced by modern forceps in the 20th century. As dental extractions can vary tremendously in difficulty, depending on the patient and the tooth, a wide variety of instruments exist to address specific situations.

The most common reason for extraction is tooth damage due to breakage or decay. There are additional reasons for tooth extraction: 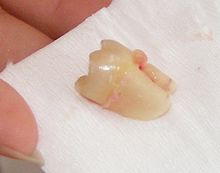 An extracted 3rd molar that was horizontally impacted.

Extractions are often categorized as "simple" or "surgical".

Simple extractions are performed on teeth that are visible in the mouth, usually under local anaesthetic, and require only the use of instruments to elevate and/or grasp the visible portion of the tooth. Typically the tooth is lifted using an elevator, and using dental forceps, rocked back and forth until the Periodontal ligament has been sufficiently broken and the supporting alveolar bone has been adequately widened to make the tooth loose enough to remove. Typically, when teeth are removed with forceps, slow, steady pressure is applied with controlled force.

Following extraction of a tooth, a blood clot forms in the socket, usually within an hour. Bleeding is common in this first hour, but its likelihood decreases quickly as time passes, and is unusual after 24 hours. The raw open wound overlying the dental socket takes about 1 week to heal. Thereafter, the socket will gradually fill in with soft gum tissue over a period of about one to two months. Final closure of the socket with bony remodeling can take six months or more.