Dovre is a municipality in Oppland county, Norway. It is part of the traditional region of Dovre. The administrative centre of the municipality is the village of Dovre. 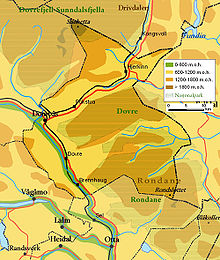 The municipality is bordered on the north by Oppdal municipality, on the east by Folldal, on the south by Sel and Vågå, and on the northwest by Lesja. The highest peak is Snøhetta at a height of 2,286 metres (7,500 ft).

The municipality (originally the parish) is named after the old Dovre farm (Old Norse: Dofrar), since the first church was built here. The name is the plural of a (unknown) word *dofr - but this could be related to Lithuanian daubà 'cleft, gorge'. In the hillside above the Dovre farm are two small rivers running in two deep gorges.

Other places in Norway, that have names beginning with Dovre-, are also in the vicinity of clefts and gorges, and in southern Sweden, Dovra or Dovrasjödalen is the name of a wide gorge near Hallsberg[1]. 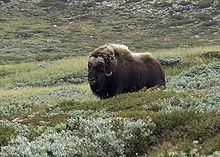 The coat-of-arms is from modern times. They were granted on 11 July 1986. The arms show a black muskox with a yellow horn on a gray background. The muskox is an animal typical for the northern parts of Canada, Alaska, and Greenland. It is not native to Norway, but in 1932, ten muskoxen were released near Dovre. In 1978, there were still 35 animals, and the animal is thus a typical symbol for the municipality.[2]

People have lived at Dovre for about 6,000 years. In the stone age, they were primarily hunters and fishermen. Approximately 2000 years ago, the first farms were developed at this location.

Dovre is mentioned in the Heimskringla (The Chronicle of the Kings of Norway) by Snorri Sturluson. In 1021, King Olaf laid hold of all the best men, both at Lesja and Dovre, and forced them either to receive Christianity or suffer death, if they were not so lucky as to escape.[3]

The Pilgrim's Route (Old King's Road) between Oslo and Trondheim in the 16th century passed through the Gudbrandsdal valley. After leaving the valley of the Lågen (downriver from present day Dombås) it passed over the Dovre Mountains into the present-day municipality. The heavy stream of annual pilgrims who visited the shrine of St. Olaf in Trondheim prior to the Reformation resulted in the erection of mountain stations where the pilgrims could find food and shelter. In speaking of this route, Gjerset quotes Peder Claussøn Friis as writing:

But in the winter people of high estate, as well as members of the court, travel mostly this way, because however high and deep the snow may fall, it blows together on the high mountains and becomes so hard men and horses can walk on it. The bonder run over it on ski and snowshoes. There are three stations: Drivstuen, Herdekinn, and Fogstuen built on this same mountain in order that travelers may find lodging there. …at the stations there are implements and dry wood, so that the traveler may build themselves fire, and not suffer from cold, when they have to remain over night, and cannot find the way across the mountain.[4]

The Battle of Kringen (Slaget ved Kringen) took place in August 1612, just downstream of Dovre, where the Scottish force stayed on 24 August 1612.

The municipality of Dovre was created when it was separated from the municipality of Lesja in 1861. The area "upper Folldal" was transferred from Dovre (and Oppland county) to Alvdal (and into Hedmark county) in 1884. 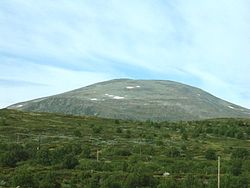 Dovre National Park lies primarily in Dovre, although part lies in Folldal in Hedmark. It was established in 2003. Dovre National Park covers an area of 289 square kilometres (112 sq mi) and the altitude varies from the tree line at 1,000 metres (3,281 ft) to the Folkstuhøe peak at 1,716 metres (5,630 ft). It is located between Rondane, which lies to its southeast, and Dovrefjell-Sunndalsfjella on its northwest.

The following cities are twinned with Dovre:[5]