Dovrefjell is a mountain range in central Norway that forms a natural barrier between Eastern Norway and Trøndelag, the area around Trondheim. As a result, it has been heavily trafficked during and probably preceding historical times. Several mountain inns were established in the Middle Ages to house pilgrims traveling to Trondheim, and there are even ruins of an old leper colony in the northern area of it.

Fokstumyra and the Dovrefjell mountains

The main south-north highway (E6) and railway Dovrebanen in Norway runs over Dovrefjell. The highway is a year-round highway but is at rare occasions closed for short periods during heavy winter weather conditions.

The natural habitat for many rare plants and animals, it became a national park in several stages starting in 1911, when some plants were put under protection. When the railroad was built from Oslo to Trondheim in 1921, one of the marshes was preserved. In 1974, parts of the range became a national park and the park was extensively enlarged in 2002. Together with Rondane, it has Norway and Europe's last stock of wild reindeer of Beringian origin. Dovrefjell (west of E6/Dovrebanen) also has a stock of musk oxen, imported from East-Greenland in 1932.

The Dovrefjell area has now been almost entirely protected as two national parks: 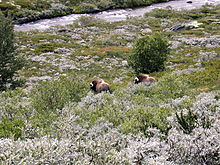 The highest mountain in the region is Snøhetta at 2,286 meters above sea level. The range provides cross-country skiing and hiking opportunities. The river Driva, running north through the municipality of Oppdal, has its source in the Dovrefjell range.

For the first element, see Dovre. The last element is fjell ('fell, mountain').

It is common to use the shortened form Dovre also for the large mountainous area around Dovrefjell (see Dovre region).

From the oldest times has Dovrefjell been the border region between the northern and southern parts of Norway, and the road over the mountain was well known. The expression "til Dovre faller" ('until the Dovre mountains fall apart' = until the end of the world) is widely used in Norwegian.