Offshore oil and gas in the United States

Offshore oil and gas in the United States

Offshore oil and gas in the United States provides a large portion of the nation’s oil and gas supply. Large oil and gas reservoirs are found in the sea nearby Louisiana, Texas, California, and Alaska. Environmental concerns have prevented or restricted offshore drilling in some areas, and the issue has been hotly debated at the local and national levels. 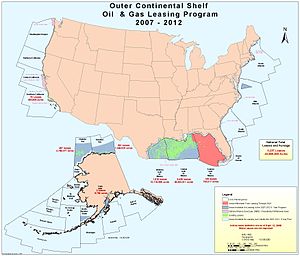 Ownership of offshore oil and gas

The issue of state versus federal ownership has a long and contentious history (see Tidelands). The US Supreme Court ruled in 1947 that the federal government owned all the seabed off the California coast; the court applied the same doctrine against Louisiana and Texas in 1950. The court ruling invalidated existing state leases over producing offshore oil fields in the three states. However, the US Congress passed the Submerged Land Act in 1953, which recognized state ownership of the seabed within 3 nautical miles (6 km) of the shore.[3] That same year Congress also passed the Outer Continental Shelf Act, which gave the federal government jurisdiction over minerals on and under the seabed farther offshore from state waters.

The first federal offshore lease sale was held in 1954, to offer oil production rights under federal seabed in offshore Louisiana. 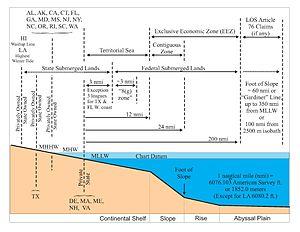 Each coastal state owns the territory extending 3 nautical miles (6 km) from the shore at mean low tide, and has jurisdiction to decide whether or not, and under what terms, to lease the territory for oil and gas. Exceptions include Texas and the west coast of Florida, which for historical reasons own the seabed out to 9 nautical miles (17 km) from the shore. Louisiana is included in the 3 nautical mile rule, but because it had active offshore leases defined before 1950 (and before most other states), its territory is measured using the Admiralty Nautical Mile, while other states use the International Nautical Mile, adopted by the United States in 1954.

The exact definition of the shoreline, dividing state waters offshore and potential private land onshore, depends on state law. Shifting shorelines in the vicinity of oil fields have been a thorny issue. In the Goose Creek field along the coast in Harris County, Texas, so much oil was produced that the ground elevation sank ten or more feet, putting some privately owned oil-producing lands below sea level. The state of Texas then declared that the newly submerged land, along with its oil revenue, was state property.

By virtue of the Law of the Sea, which the US has signed but not ratified, each nation controls an Exclusive Economic Zone (EEZ) that extends 200 nautical miles (370 km) from its shore. The EEZ confers exclusive rights to a nation to explore and produce minerals, including oil and gas. In areas within 200 nautical miles of two or more nations, the territorial line is drawn equidistant from the shores of the two nations. The US and Canada referred a dispute over the EEZ boundary in the Atlantic Ocean to the International Court of Justice, which decided the matter (see Georges Bank). Article 76 of the Law of the Sea provides that nations may under certain circumstances extend their EEZs beyond the 200 nautical mile limit, to up to 350 nautical miles (650 km) from shore.

The 200 nautical mile EEZ left a small area in the western Gulf of Mexico enclosed by the EEZs of the United States and Mexico, but outside the EEZ of either nation (the "doughnut hole"). The US and Mexico concluded a treaty to divide the area between them. A second, and as yet unresolved "doughnut hole" exists in the eastern Gulf of Mexico, bordered by the EEZs of the US, Mexico, and Cuba.

Leasing and drilling on federal offshore seabed is controlled by the US Bureau of Ocean Energy Management, Regulation and Enforcement (BOEMRE), previously named the US Minerals Management Service (MMS). The BOEMRE issues leases through competitive bidding by sealed bids. The oil and gas company offering the highest up-front payment to the government (called a bonus) wins the lease. The government also receives a fixed annual rental based on the area for non-producing leases, and a percentage of the market value of any oil or gas produced and sold (royalty). The leases expire after a set number of years, or continue however long afterward that oil and gas are produced from the lease. Individual tracts are generally 9 square miles (23 km2). Current leases being offered in the Gulf of Mexico have 5-year terms for tracts in water depths of less than 400 m, and 8 years for tracts in water greater than 400 m. Royalty rates are 18.75% regardless of water depth.[5] From 1954 through 2004, the federal government received $64 billion in bonuses, $3 billion in rentals, $89 billion in royalties, and $3 billion in taken-in-kind oil deliveries in lieu of royalties.[6]

Some potential petroleum deposits underlie areas outside the EEZ. For example, the North Chuckchi Basin in the Arctic Ocean is partly inside and partly outside the US EEZ.

Historically, offshore drilling began by extending known coastal oil- and gas-producing trends out into the ocean. For this reason, most US offshore drilling has taken place offshore Louisiana, Texas, California, and Alaska, areas with coastal onshore oil and gas fields.

The first federal lease sale offshore Alaska was held in 1976. Alaska produces oil and gas from offshore areas in the Cook Inlet and the Arctic Ocean.[7] Endicott Island is an artificial island built to produce oil from beneath the Beaufort Sea.

Offshore drilling began in California in 1896, when operators in the Summerland Oil Field in Santa Barbara County followed the field into the ocean by drilling from piers built out over the ocean.

State offshore seabed in California produced 37,400 barrels (5,950 m3) of oil per day, and federal offshore tracts produced 66,400 barrels (10,560 m3) of oil per day in November 2008. State and federal offshore tracts together made up 16% of the state's oil production.[9] Notable offshore fields include the Ellwood Oil Field, which is partially onshore and partially offshore, and the Dos Cuadras Field, source of the 1969 spill, which is entirely within the federal zone.

See Offshore oil and gas in the US Gulf of Mexico

The eastern Gulf of Mexico, which includes offshore Gulf Coast Florida, has never been a petroleum-producing area due to federal and state restrictions on exploration. Offshore platforms currently exist as far east as to near the Florida-Alabama border.

See Offshore drilling on the US Atlantic coast

Farther north, in Canadian waters, Shell Canada drilled 14 wells offshore from Vancouver Island from 1967-1969. None were successful. Canada has had a federal moratorium on offshore drilling on its west coast since 1972.[16]

The Canadian side of Lake Erie has 480 producing gas wells in the lake. Gas production in Canadian Lake Erie waters dates back to 1913; more than 2000 wells have been drilled to the Clinton Sand, up to a few miles from the US side of the lake; the same formation produces gas from many onshore wells on the US side, but there are no wells in the US portion of the lake.[17] The province of Ontario, where the offshore wells are located, allows gas wells, but not oil wells, in offshore Lake Erie.[18][19][20] Ontario allows oil production from below the lake only from wells drilled directionally from onshore surface locations; a number of such directional wells are producing oil from beneath Lake Erie in the Goldsmith/Lakeshore Field.[21]

A gas well to the Medina Group was drilled in 1958 in Pennsylvania state waters in Lake Erie.[22] 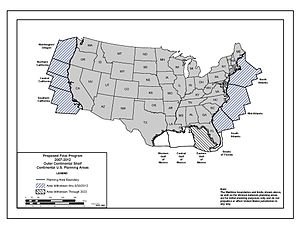 Areas withdrawn from oil and gas leasing as of 2007

Congress passed the Marine Protection, Research and Sanctuaries Act in 1972, which provided for the establishment of National Marine Sanctuaries, in which certain activities, including oil and gas drilling, are prohibited. To date, 13 sanctuaries with a combined area of 150,000 square miles (390,000 km2) have been so designated.

In 1982, the US Congress directed that no federal funds be used to lease federal tracts off the coasts of Washington, Oregon, or central and northern California. Over the years Congress added other areas until the prohibited area included all the east and west coasts, and the eastern Gulf of Mexico. Congress repeated the effective ban on offshore drilling in these areas every year until September 2008, when an appropriations bill passed the House and Senate without the ban.

In 2002, Congress imposed a moratorium on drilling on or directionally beneath the Great Lakes. The ban was made permanent by the Energy Policy Act of 2005.[25]

Part of the central and most of the eastern Gulf of Mexico was declared off-limits to oil and gas leasing until 2022 by the Gulf of Mexico Energy Security Act of 2006.[26]

Offshore areas of the US may contain resources of sulfur, salt, sand and gravel, phosphate rock, manganese nodules, and heavy-mineral placer deposits. To date, none of these has been produced for commercial purposes except sulfur and salt, although the MMS has allowed sand dredging in federal waters to restore damaged beaches in Maryland, Virginia, South Carolina, and Florida.[27]

From 1960 to 2000, sulfur was mined by the Frasch process from the caprock of a salt dome at the Main Pass 299 mine, offshore Louisiana.[28] A total of 34 million short tons of sulfur were recovered before the mine was closed; salt was also recovered.[29]