Offshore oil and gas in California

Offshore oil and gas in California 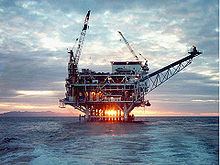 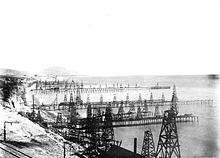 Oil wells on wharves built out over the ocean, Summerland oil field, 1902.

Offshore oil and gas in California provides a significant portion of the state's petroleum production. Offshore oil and gas has been a contentious issue for decades, first over the question of state versus federal ownersip, but since 1969 mostly over questions of resource development versus environmental protection.

Notable offshore fields include the Ellwood Oil Field and the Wilmington Oil Field, both of which are partially onshore and partially offshore, and the large Dos Cuadras Field in the Santa Barbara Channel, which is entirely in the federal zone.

Knowledge of the probable existence of oil off the coast of California dates back to the early European explorers who noted oil slicks in the Santa Barbara channel (see Coal Oil Point seep field). In 1792, when the English explorer James Cook anchored his ship in the Santa Barbara Channel, his navigator George Vancouver wrote that the sea was “... covered with a thick, slimy substance,” and added “... the sea had the appearance of dissolved tar floating on its surface, which covered the ocean in all directions within the limits of our view.”[2]

“Off the coast of Santa Barbara. The strong smell of petroleum comes from the sea, the oil floating on the water.”[3]

A description of the oil and gas seeps offshore southern California can be found in a report on the California Division of Oil and Gas's website.[4] The report is accompanied by a map, showing the locations of offshore petroleum seeps from Point Arguello (north of Santa Barbara) to Mexico.[5]

Offshore drilling began in California in 1896, when operators in the Summerland Oil Field in Santa Barbara County followed the field into the ocean by drilling from piers built out over the ocean. At least 187 offshore oil wells were drilled in the Summerland Field by 1902. A number of other coastal fields were extended offshore in Santa Barbara, Ventura, Los Angeles, and Orange counties, usually by directional drilling.

The Wilmington Oil Field in Los Angeles and Long Beach was extended offshore into Long Beach Harbor by drilling numerous wells directionally from four artificial islands in the harbor. The drilling islands, owned by the City of Long Beach, are landscaped with palm trees.[6]

Ownership of offshore oil and gas

The issue of state versus federal ownership has a long and contentious history (see Tidelands). The US Supreme Court ruled in 1947 that the federal government owned all the seabed off the California coast. However, the US Congress passed the Outer Continental Shelf Act in 1953, which recognized state ownership of the seabed within 3 nautical miles (6 km) of the shore.[7]

Oil production began from a man-made offshore island off Seal Beach in 1953. The first strictly offshore oil field in California was the Belmont Offshore Field, discovered in 1948 1.6 miles (2.6 km) from the shore of Seal Beach; production did not begin until 1954 when a man-made island was built in 40 feet of water for drilling and production equipment.[9]

The first of ten federal offshore lease sales in California was held in 1963.

The Union Oil Company discovered the Dos Cuadras oil field in federal waters of the Santa Barbara Channel in 1968, but success turned to disaster in 1969, when large quantities of oil began escaping to the sea floor near a drilling well in the field.[10] The resulting oil slick came ashore along 35 miles (56 km) of coastline in Santa Barbara County, and turned public opinion against offshore drilling in California.[11] In response to the oil spill, US Secretary of the Interior Walter Hickel removed 53 square miles (140 km2) of federal tracts near Santa Barbara from oil and gas leasing.

The federal government continued to hold offshore lease sales through 1984. Then the US Congress directed that no federal funds be used to lease additional federal tracts off the coast of California. Congress repeated the moratorium on new leases every year until September 2008, when an appropriations bill passed the House and Senate without the ban; however, no federal lease sales have been proposed for offshore California since the ban was lifted.

A lawsuit by the state of California prevented the federal government from allowing development on 36 federal leases issued before the congressional moratorium. The federal government voided 29 of the contested leases by repaying $1.1 million in lease bonuses; the seven additional federal leases have not been resolved, but remain inactive because of the litigation. The Minerals Management Service estimates that the seven undeveloped leases contain 1,000,000,000 barrels (0.16 km3) of recoverable oil and 500,000,000,000 cubic feet (14 km3) of recoverable gas.[13]

Although leasing in state waters has been prohibited since 1994, the law allows exceptions when petroleum under state lands is being drained by nearby wells on non-state tracts; no such exceptions have been made to date. In 2008 both Plains Exploration & Production (PXP) and ExxonMobil offered competing proposals to the state to drill wells into Tranquillon Ridge field, offshore Santa Barbara County. The Tranquillon Ridge field lies partly in state and partly in federal waters. Neither proposal entailed additional offshore surface structures. Plains proposed to drill wells directionally from their existing Irene Platform in federal waters. ExxonMobil proposed to drill directionally from wells onshore in Vandenberg Air Force Base.[14] The Plains Exploration proposal was endorsed by the Environmental Defense Center and by Get Oil Out![15][16] On 29 January 2009 the State Lands Commission denied the applications by a 2-1 vote.[17]

In July 2009 Governor Arnold Schwarzenegger proposed allowing oil production from the state portion of Tranquillon Ridge field, as a way to increase state revenue, which would include a $100 million up-front payment to the state.[18][19] The provision was defeated in the state legislature.[20] On 3 May 2010, governor Schwarzenegger, reacting to the Deepwater Horizon oil spill, withdrew his support for the Tranquillon Ridge drilling plan, stating, "I see on TV the birds drenched in oil, the fishermen out of work, the massive oil spill and oil slick destroying our precious ecosystem."[21] 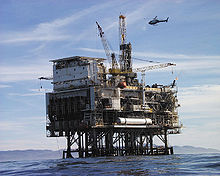 Nine active offshore drilling and production locations remain in state and municipal waters: one platform and one artificial island in the Santa Barbara Channel, and four artificial islands and three platforms from the offshore portion of the Wilmington Oil Field in San Pedro Bay/Long Beach Harbor. The first artificial offshore island, for Belmont Offshore Field, was removed in 1999.[23]

Twenty-three offshore drilling and production platforms remain in federal waters, producing 22 million barrels of oil and 21 billion cubic feet of gas per year (as of 2009).[24]