The North Atlantic right whale (Eubalaena glacialis) which means "good, or true, whale of the ice") is a baleen whale, one of three right whale species belonging to the genus Eubalaena,[1] formerly classified as a single species. With only 400 in existence, North Atlantic right whales are among the most endangered whales in the world. They are protected under the U.S. Endangered Species Act of 1973 and the Marine Mammal Protection Act of 1972. Vessel strikes and entanglement in fixed fishing gear are the two greatest threats to their recovery.[3]

About four hundred right whales live in the North Atlantic Ocean. They migrate between feeding grounds in the Gulf of Maine and their winter calving areas off Georgia and Florida, an ocean area with heavy shipping traffic.

Like other right whales, the North Atlantic right whale is readily distinguished from other whales by the callosities on its head, a broad back without a dorsal fin, and a long arching mouth that begins above the eye. The body of the whale is very dark grey or black, occasionally with white patches on the belly. The right whale's callosities appear white due to large colonies of cyamids or whale lice.

Forty percent of a right whale's body weight is blubber, which is of relatively low density. Consequently, unlike many other species of whale, dead right whales float.

There is little data on their life span, but it is believed to be at least fifty years, and some may live more than a century.

They first give birth at age nine or ten after a year-long gestation; the interval between births seems to have increased in recent years and now averages three to six years. Calves are 13–15 feet (4.0–4.6 m) long at birth and weigh approximately 3,000 pounds (1,400 kg).[6]

Right whales feed mainly on copepods and other small invertebrates such as krill, pteropods, and larval barnacles, generally by slowly skimming through patches of concentrated prey at or below the ocean surface.[2]

Right whales were so-named because whalers thought they were the "right" whale to hunt. As the "right" whale continued to float long after being killed, which made it possible to 'flech' or strip the whale of blubber without having to take it onboard ship. Combined with the right whale's lack of speed through water, feeding habits, and coastal habitat, they were easy to catch, even for whalers equipped only with wooden boats and hand-held harpoons.[7] 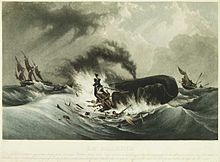 Whaling in small wooden boats with hand harpoons was a hazardous enterprise, even when hunting the "right" whale. 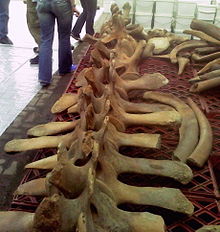 Basques were the first to commercially hunt this species. They began whaling in the Bay of Biscay as early as the eleventh century.[8] The whales were hunted initially for their oil but, as meat preservation technology improved, their value as food increased. Basque whalers reached eastern Canada by 1530[9] and the shores of Todos os Santos Bay (in Bahia, Brazil) by 1602. The last Basque whaling voyages were made prior to the commencement of the Seven Year's War (1756–1763). A few attempts were made to revive the trade, but they failed. Shore whaling continued sporadically into the 19th century.

Setting out from Nantucket and New Bedford in Massachusetts and from Long Island, New York, Americans took up to one hundred right whales each year, with the records including one report of 29 whales killed in Cape Cod Bay in a single day during January 1700.[10] By 1750, the North Atlantic right whale population was, for commercial purposes, depleted. Yankee whalers moved into the South Atlantic before the end of the 18th century. The population was so low by the mid-19th century that the famous Whitby whaler Rev. William Scoresby, son of the successful British whaler William Scoresby senior (1760-1829), claimed to have never seen a right whale.[11]

Based on back calculations using the present population size and growth rate, the population may have numbered fewer than 100 individuals by 1935.[10] As it became clear that hunting right whales was unsustainable, international protection for right whales came into effect, as the practice was banned globally in 1937. The ban was largely successful, although violations continued for several decades. Madeira took its last two right whales in 1968.

For the period of 1970 to October 2006, humans have been responsible for 48% of the 73 documented mortalities of the North Atlantic right whale.[12] A 2001 forecast showed a declining population trend in the late 1990s, and indicated a high probability that North Atlantic Right Whales would go extinct within 200 years if the then-existing anthropogenic mortality rate was not curtailed.[13] The combined factors of small population size and low annual reproductive rate of right whales means that a single death represents a significant mortality rate. Conversely, significant reduction in mortality rate can be obtained by preventing just a few deaths. It was calculated that preventing the deaths of just two females per year would enable the population to stabilize.[13] The data suggests, therefore, that human sources of mortality may have a greater effect relative to population growth rates of North Atlantic right whales than for other whales. The principal factors believed to be retarding growth and recovery of the population are ship strikes and entanglement with fishing gear.[10]

The single greatest danger to this species is injury sustained from ship strikes.[14] Between 1970 and October 2006, 37% of all recorded North Atlantic right whale deaths were attributed to collisions.[7][12] During the years 1999–2003, incidents of mortality and serious injury attributed to ship strikes averaged 1 per year. For the years 2004–2006, that number increased to 2.6.[2] Additionally, it is possible that the official figures actually underestimate the actual ship-strike mortality rates, since whales struck in offshore areas may never be sighted due to low search effort.[12]

In 2007, and again on June 1, 2009, the US government changed shipping routes out of Boston in an attempt to reduce collision.[15] NOAA estimates that implementing an "Area To Be Avoided" (ATBA) and narrowing the "Traffic Separation Scheme" (TSS) by 1 nautical mile (1.9 km) will reduce the relative risk of right whale ship strikes by 74% during April–July (63% from the ATBA and 11% from the narrowing of the TSS).[16]

The other known source of human-induced mortality is entanglement in fixed fishing gear such as bottom-set groundfish gillnet gear, cod traps and lobster pots. Between 1970 and October 2006, there have been 8 instances where entanglements have been the direct cause of death of North Atlantic right whales. This represents 11% of all deaths documented during that period. From 1986 to 2005, there were a total of 61 confirmed reports of entanglements, including the aforementioned mortalities. It is likely that official figures underestimate the actual impacts of entanglement. It is believed that chronically entangled animals may in fact sink upon death, due to loss of buoyancy from depleted blubber reserves, and therefore escape detection.[12]

Beyond direct mortality, it is believed that whales that survive entanglement episodes may suffer other negative effects that may weaken it, reduce fertility, or otherwise affect it so that it is more likely to become vulnerable to further injury. Because whales often free themselves of gear following an entanglement event, scarring may be a better indicator of fisheries interaction than entanglement records. Recent analysis of the scarification of right whales showed that over 75% of whales examined during 1980-2002 were scarred at least once by fishing gear. Further research has indicated that between 14% and 51% of right whales are involved in entanglement each year.[10]

In 2007, so as to protect northern right whales from serious injury or mortality from entanglement in gillnet gear in their calving area in Atlantic Ocean waters off the southeast United States, the National Marine Fisheries Service revised regulations implementing the Atlantic Large Whale Take Reduction Plan (ALWTRP). This plan expands the restricted area to include the waters off of South Carolina, Georgia, and Northern Florida. It also prohibits gillnet fishing or even gillnet possession in those waters for a period of 5 months, beginning on November 15 of each year, which coincides with the annual right whale calving season.[17]

When entanglement prevention efforts fail, disentanglement efforts occasionally succeed, despite the fact that such efforts are more frequently impossible or unsuccessful. Nevertheless, they do in fact make a significant difference. During the period 2004-2008 there were at least four documented cases of entanglements for which the intervention of disentanglement teams averted a likely death of a right whale.[10] For the first time in 2009 and again in 2011, scientists successfully used chemical sedation of an entangled whale to reduce stress on the animal and to reduce the time spent working with it. After disentangling the whale, scientists attached a satellite tracking tag, administered a dose of antibiotics to treat entanglement wounds and then another drug to reverse the sedation.[3]

According to a census of individual whales identified using photo-identification techniques, the latest available stock assessment data (December 2010) indicates that a minimum of 361 recognized individuals were known to be alive in 2005.[10] Up to four hundred North Atlantic right whales are thus thought to exist at present, almost all living in the western North Atlantic Ocean. In spring, summer and autumn, they feed in a range stretching from New York to Nova Scotia. Particularly popular feeding areas are the Bay of Fundy, the Gulf of Maine and Cape Cod Bay. In winter, they head south towards Georgia and Florida to give birth.

There have been a few sightings further east over the past few decades, with several sightings close to Iceland in 2003. There was speculation that these could be the remains of a virtually extinct Eastern Atlantic stock, but examination of old whalers' records suggest that they are more likely to be strays from further west.[9] A few are sighted regularly in waters adjacent to Norway, Ireland, Spain, Portugal, and the Canary Islands.

In January 2009, one animal was sighted off Pico Island, Azores, the first confirmed appearance there since 1888. It was later revealed that this animal, which was named as "Pico", is a female from the western Atlantic group.[18] Right whales have rarely been observed in the Mediterranean Sea, near Italy[19] and Portugal.[20] The Norway sightings appear to be of strays from the western Atlantic stock.[21] In 2009, right whales appeared in waters around Greenland[22] although their origin was not confirmed.[23] Prior to this, no right whales had been killed or confirmed present off the coast of Greenland for around two hundred years.[24]

In early 2009, scientists recorded a record number of births among the western North Atlantic population. 39 new calves were recorded, born off the Atlantic coast of Florida and Georgia.

"Right whales, for the first time in a long time, are doing their part: they're having the babies; they're having record numbers of babies," said Monica Zani, an assistant scientist at the New England Aquarium who works with right whales. "We need to be vigilant and still do our part to prevent the whales from being killed."[6]

The species is listed as endangered by the U.S. government National Marine Fisheries Service under the U.S. Endangered Species Act.

The Northern right whale is listed on Appendix I[25] of the Convention on the Conservation of Migratory Species of Wild Animals (CMS) as this species has been categorized as being in danger of extinction throughout all or a significant proportion of their range and CMS Parties strive towards strictly protecting these animals, conserving or restoring the places where they live, mitigating obstacles to migration and controlling other factors that might endanger them.

In addition, the North Atlantic right whale is covered by the Agreement on the Conservation of Cetaceans in the Black Sea, Mediterranean Sea and Contiguous Atlantic Area (ACCOBAMS).