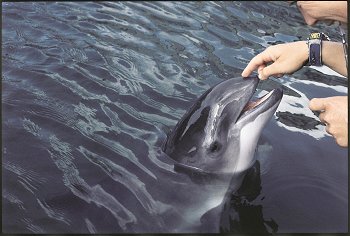 Porpoises are ns of the Phocoenidae; they are related to s and s. They are distinct from dolphins, although the word "porpoise" has been used to refer to any small dolphin, especially by and . The most obvious visible difference between the two groups is that porpoises have flattened, spade-shaped distinct from the conical teeth of dolphins, and shorter beaks.

Porpoises, divided into six species, live in all oceans, mostly near the shore. Freshwater populations of the also exist. Probably the best known species is the , which can be found across the Northern Hemisphere. Like all toothed whales, porpoises are predators, using sounds to locate prey and to coordinate with others. They hunt fish, squid, and crustaceans.

Porpoises apparently diverged from dolphins about 15 million years ago in the northern Pacific, then spread across the globe much later.

Porpoises, along with whales and dolphins, are descendants of land-living s (hoofed animals) that first entered the oceans around 50 million years ago. During the (23 to 5 ), mammals were fairly modern. The cetaceans diversified, and fossil evidence suggests that porpoises diverged from dolphins and other cetaceans around 15 MYA. The oldest fossils are known from the shallow seas around the north Pacific, with animals spreading to the European coasts and southern hemisphere only much later, during the .

Recently-discovered hybrids between male Harbour porpoises and female s indicate that the two species may actually be members of the same .